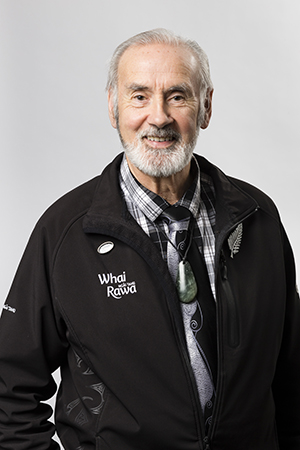 Michael (Ngāi Tahu – Waihōpai), was involved in setting up a Southland model that has ensured iwi views are a strong and valued part of council decision-making, and that remains one of his proudest achievements.

Michael’s family history can be traced back more than 800 years in Southland and he says this helped ignite his passion for protecting the future of Ngai Tahu.
”I feel a responsibility for the area,” he said.

Years before becoming involved with Te Ao Marama, Michael gained his private pilot’s licence in 1987, and turned his passion of training horses into a successful venture that saw his horseswin more than 100 races on the track.

In 1996, Te Ao Marama Inc was formed to consider resource management issues relevant to local iwi. To support this work, the four Southland councils and rūnanga worked together to form a Charter of Understanding, which officially established the relationship between councils and iwi.

Michael was instrumental in seeing Te Ao Marama involved with the development of the Water 2010 series – Environment Southland’s state of the environment reporting. He also had input into plans and policies from all councils; and in establishing the joint iwi-policy analyst role with Environment Southland – a role he considers important to ensuring iwi policy position is well-understood and provided for.

He is excited about the possibility of spending the whole tītī (muttonbird) season down on the islands. “I’ll be able to cut tracks and maintain the hut, rather than rushing to do everything in a few weeks of annual leave,” he says. With a strong connection and passion for tītī, he’s thrilled that he’ll the opportunity to spend a bit more time there.