An unusual team from Ngāi Tahu might be spotted around Te Waihora over the next few months peering into streams wearing masks, snorkels and waders. They’re looking for a secretive species often overlooked nowadays- the kākahi or freshwater mussel.

The Ngāi Tahu team has had luck already, finding mussels in some sites around the lake. But others sites, where kākahi were in the past, have turned up nothing.

Kākahi were very common in sandy-bottomed streams and lakes in the past and were an important source of kai for Ngāi Tahu whānui living around Te Waihora and elsewhere. Kākahi were often eaten raw or lightly boiled. Shell middens can still be found in the sediment of Te Waihora, where there used to be extensive kākahi beds.

Now kākahi are officially classified as declining by the Department of Conservation, with many sites where they were once common, now devoid of mussels. Another sign that they are declining is that it is there are no smaller, younger mussels to be found at many sites. 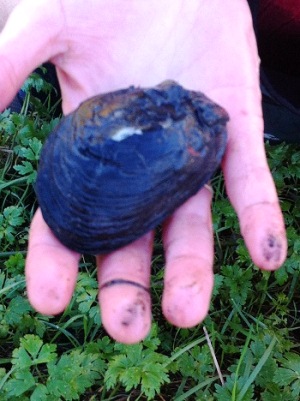 Many reasons for the species decline have been suggested, such as declining water quality and the disappearance of native fish such as the koaro, a whitebait species. The kākahi need fish like the koaro, or kōura to spread their young. A young kākahi is called a ‘glochidia’, which has a hook to attach it to other species as a hitchhiker. The glochidia gets a ride to a new site, detaches, then grows a mussel shell.

Freshwater mussels can live to a very old age of 50 years- a lot longer than marine species of mussel. They slowly grow to a size of about 8 cm across, but people have reported finding some much larger than this.

By mapping which waterways still have kākahi, Whakaora Te Waihora can focus on protecting and enhancing the remaining kākahi sites. Potentially in the future, it also might be possible to re-introduce them to former sites where they have been lost.

Have you seen any kākahi in streams in the Te Waihora/Lake Ellesmere area?
Sophie Allen, Senior Environmental Advisor at Te Rūnanga o Ngāi Tahu would be keen to hear from you. Please contact her on 03 974 0197 or [email protected]