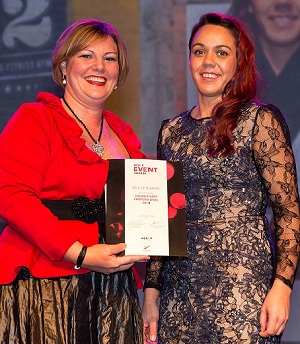 The NZAEP awards recognise events that have positively impacted New Zealand, its regions or local communities. The national winners were announced at the 2014 NZAEP Event Awards dinner held in Christchurch in August.

More than 70 entries from across the country were received for nine different categories and 31 finalists were chosen.

Kelly was honoured for her innovative and philanthropic event, Rumble in the Rubble (www.rumbleintherubble.co.nz), held on Friday 4 April 2014. The win secured her a scholarship place in the 2015 Certified Festival and Event Executive program. The CFEE is administered by the International Festivals and Events Association’s Academy of Education and is considered the global benchmark for event professionals.