The $1.4 million rebuild of the fire damaged Hokonui Rūnanga building is taking shape three months after the project started on April 22. The previous complex in Charlton Road, Gore, was badly damaged by an electrical fault in the workshop in May last year.

Financial officer Terry Nicholas said the area of the rebuild involved 500m2, which was about half of the complex’s total floor space. The office areas were largely unaffected by the fire except for smoke damage. However, the complex’s meeting room, kitchen and medical room were badly damaged. As part of the rebuild, the rūnanga had taken the opportunity to redesign the building to incorporate a sleeping area, an upgraded commercial kitchen and larger dining area. 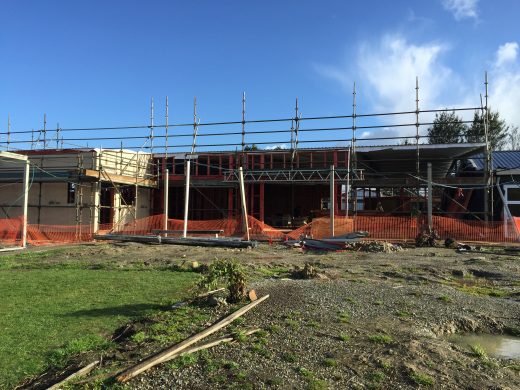 The complex had been well used for functions such as weddings and for major Ngāi Tahu hui before the fire, Mr Nicholas said.

The redesigned building would feature a better layout, better use of space and would be more user friendly.

“We have actually been able to design for what we are set up to do. It has been designed for a fully functional conference facility.”

The complex had been, and would continue to be, an asset to the community he said. It was pretty well used by the community before it burnt down – it’s got multiple uses.

“Our aim is to provide a service in a setting of excellence” when completed, the complex would include a fully landscaped area along its east-facing frontage incorporating a seamless connection from the building to an outdoor dining and recreation area facing on the existing wetland which would also be further developed.

The project, which is being undertaken by Archer Construction, Invercargill, is expected to be completed in December

Story written by Russell Fredric of The Ensign, Gore.