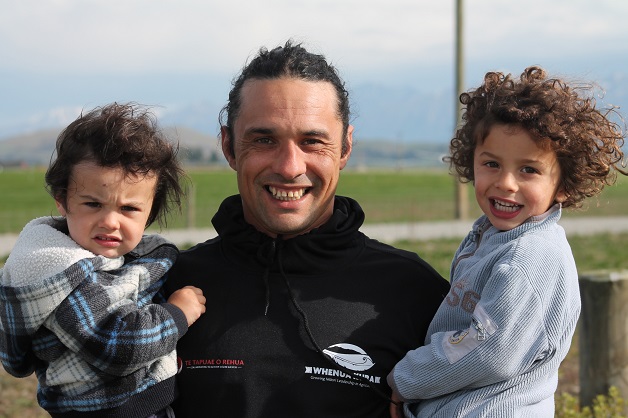 Hemi Dawson’s passion and skills for dairy farming were recognised recently when he became one of the newest dairy farm managers at the Ngāi Tahu Te Whenua Hou farms.

“I feel blessed to be able to make connections with the iwi land because there are plenty of whānau who don’t have the same opportunities.”

In June, Hemi, who currently works in a dairy production management position, will manage operating dairy farm number three at Te Whenua Hou farming development, with a herd of around 1,000 cows.

Hemi says that when he first began working on the Ngāi Tahu farms he was unsure whether there would be more management roles available but he says he and his whānau decided to work and live there anyway, as they knew Ngāi Tahu Farming had a bright future.

“I could see huge potential in Ngāi Tahu Farming – where it was going, the amount of sheep, beef and milk it is going to be able to produce. I think Ngāi Tahu Farming will be a real player in the farming industry and I want to be a part of that action.”

Hemi has worked in the dairy industry for over eight years. His management experience includes two years managing a dairy unit in Ireland, and working on his wife’s family’s farms in the Waikato. He says it will be a privilege to manage a farm on tribal land.

“I have whānau who are in the Manawhenua Working Party (for the farms) and I feel that it’s good to be on our ancestral land representing my hapū.

“I see the land as being alive and when I look at it I see my tīpuna, and that’s why it’s so emotional for us. It’s all about being able to get that balance between respecting the whenua and getting fiscal outcomes.”

Hemi says he is looking forward to starting his new position and he hopes to mentor and teach his staff, in particular the Whenua Kura students, who will gain full-time employment and work experience on his farm.

“I think I will be able to find out what makes people tick, because not one size fits all especially with Māori. We learn in completely different ways to everyone else – we are more hands-on.

“It’s a real buzz having the Whenua Kura students here. I think they have really brought mauri to the place. Whenua Kura really showcases the aspirational kaupapa of farming.

“They (students) are our future leaders and it would be really awesome to see them come through one day and manage the farms. I’ve made that my personal goal. I want all of the Whenua Kura students who come through to progress.”

As part of his new role, Hemi says he will encourage his workers to pursue further education. He recently completed a Level 5 Certificate in Production Management through Primary ITO and graduated from Otago Polytechnic with a Bachelors in Applied Management majoring in Strategic Management. He is currently enrolled as a Whenua Kura student studying towards a Level 5 Diploma in Agribusiness.

“I like studying and I want to progress here at Ngāi Tahu Farming, so really this is just the start of things here for me.”