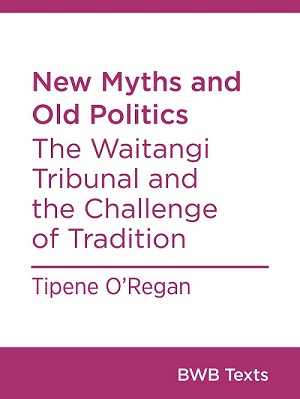 What happens when claims of New Age mysticism attempt to undermine traditional whakapapa and academic scholarship? New Myths and Old Politics is a new text from Tā Tipene O’Regan which provides a unique behind-the-scenes account of the negotiation of  the Ngāi Tahu Waitangi Tribunal claim.

It is released as a BWB Text, available in multiple, DRM-free formats from Bridget Williams Books. BWB Texts are short books on big subjects by great New Zealand writers, commissioned as short digital-first works. This text is a shortened version of a  1991 Beaglehole Memorial Lecture, delivered at the New Zealand Historical Association Conference in Christchurch. It was first published as Old Myths and New Politics: Some Contemporary Uses of Traditional History in the New Zealand Journal of History in 1992 and later included in Judith Binney’s The Shaping of History:Essays from the New Zealand Journal of History, 1967 – 1999.

“The lecture was delivered at a time when hearings of the Tribunal were becoming a battleground of the most fundamental cultural conflicts, not restricted to those between Māori and Pakeha,” writes Tā Tipene.  “Māoridom itself was experiencing a remarkable efflorescence of freshly reconstructed group identities and New Age-style incorporations into Maori ethnic identity. The Waitaha movement emanating from within contemporary Ngāi Tahu was one of these.”

Despite the experience described in his text, Ngāi Tahu continues to treasure and articulate the tribe’s authentic Waitaha heritage, he says.