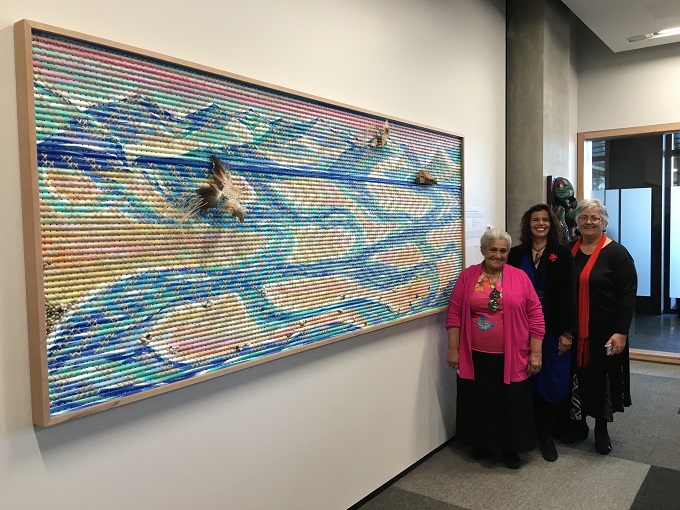 Reihana Parata, Priscilla Cowie and Morehu Flutey-Henare stand with one of their tukutuku panels in the new ECan building in Christchurch.

Ten Papatipu Rūnanga worked with the council and gifted the mauri stones, which will be placed within the landscaped area at the front of the building. There are eight in total – one each from Kaikōura, Tūāhuriri, Koukourārata, Rāpaki, Wairewa, Ōnuku, and Taumutu, with the eighth one gifted by Arowhenua, Waihao and Moeraki.

Arranged in the night sky formation of Puaka and Matariki, the kōhatu represent the geographical reach of the council’s work and its relationship with Ngāi Tahu.

The beautiful tukutuku panels were created by Ngāi Tahu artist Priscilla Cowie and weavers Morehu Flutey-Henare and Reihana Parata along with Cavan O’Connell and ECan staff and volunteers from Te Wānanga o Aotearoa.

Dame Margaret Bazley and Tā Mark Solomon opened the formal speeches, prior to the building plaque being unveiled by Prime Minister John Key.
Tā Mark Solomon spoke of the similarities in the Ngāi Tahu and ECan staff experiences in post-earthquake Christchurch. Both had left inner city buildings following the February 2011 earthquake and found temporary accommodation in the suburbs.

“We not only had unstable ground, we also had uncertain working condition. But like other organisations in Canterbury. we both remained strong. Our people showed great resolve in getting through their work, and I am always impressed by how both our organisations continued to strive despite the uncertainty.”

He said ECan’s new permanent home was beautiful and light-filled. A place “where we can build for the future”.