The degree study partnership was established in 2014 and aims to build Ngāi Tahu staff capability within Te Rūnanga o Ngāi Tahu. Funding is provided by Te Tapuae Rehua and
with a 100% pass rate in 2014, the Te Tapuae board of directors is keen to extend support for a 2015 cohort.

The degree in applied management recognises a student’s work in all their previous workstreams through a reflective process known as Assessment of Prior Learning (APL).

Hemi Te Hemi, Manager of the He Toki ki te Rika programme within Te Tapuae and one of the 2014 graduates says the one-year degree study is a very a worthwhile and rewarding journey.

“It’s a great opportunity for you to think deeply about what has shaped you as a manager, how your knowledge and beliefs about business and management have been developed and how these frameworks underpin what you do in your work,” he says.

“Capable NZ candidates often say how valuable they find the opportunity to really think deeply about themselves and their work. Some have referred to the process as the best professional development they have undertaken in years. From my own experience, you feel far more confident in your abilities as a result of undertaking this process.

“And it’s great to be recognised for things you’ve taken for granted in your career and to have your work recognised with a Level 7-8 qualification within the NZQA framework.” 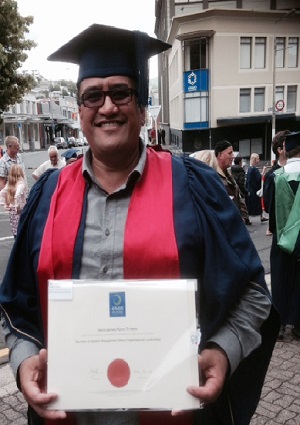 He says that recognition is massive. And while first and foremost it is about building staff capability, that comes with an incredible sense of personal achievement for those who have undertaken the course.

Members of the 2014 Ngāi Tahu cohort worked individually on their own projects but kept in touch every month for support and encouragement. That manaakitanga and whanaungatanga played a vital role if getting everyone through says Hemi Te Hemi.

“I spent most nights and weekend with my head buried in books but tertiary education is critical and I believe as a Te Tapuae staff member, I should be practising what I preach,” he says.

“Te Tapuae o Rehua is about supporting Māori aspirations and encouraging Maori to see education as a viable opportunity. We’re always keen to provide opportunities for our own staff to effect change within the Ngāi Tahu whānui.”

Hemi says that Richard Kerr-Bell, project leader for Capable NZ/Otago Polytechnic also played a key role in supporting the group through their studies.
“We all stuck together and looked after each other. That was a vital component of the course,” he says.