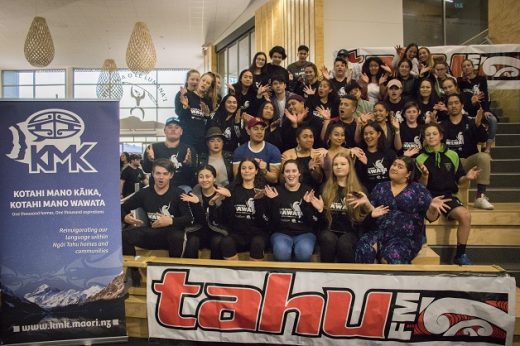 The recent success of the Kotahi Mano Wawata Rakatahi Symposium reveals the rising number of culturally competent rangatahi who are hungry for forums to celebrate and connect with their Ngāi Tahutanga.

“It was exciting to witness their potential and it was reassuring to see the rakatahi engaged in this kaupapa, with wonderful ideas and a great attitude towards te reo me ōna tīkaka” Victoria says.

She says that the leadership group at Kotahi Maho Kāika handed over much of the symposium planning in an effort to foster leadership amongst the tuakana.

“The symposium was planned by rakatahi, with a bit of guidance from those of us with a few more birthdays, but they lead out the agenda. That was an opportunity for them to take ownership of those roles, and I’m very proud of what they achieved.”

The workshops were catered to rangatahi interests and included media, technology, sports and music. Te Reo Māori was weaved into every kaupapa with students free to converse with each other and the delivery team. Paulette Tamati-Elliffe (Kāi Te Pahi, Kāi Te Ruahikihiki, Ōtākou, Te Atiawa, Ngāti Mutunga) worked with Troy Kingi on the tito waiata session. The rangatahi were motivated to compose a song about climate change after hearing a key note address on the kaupapa from Chris Brankin and Rata Rodgers. Paulette acknowledged that finding inspiration in generational issues was not a new occurrence.

“For generations we have used waiata to create and express what’s important to us. When you go to a hui you remember the kai, but taking a waiata away makes it far more memorable. Watching the tuakana teina relationship and those more confident sharing the skills and knowledge was a highlight.”

Another component of traditional knowledge was explored in the technology workshop. Pūrākau have been used to explain the world around us and pass on lessons and messages through generations, something the rangatahi got to analyse with Hori Mataki (Whānau a Apanui, Ngati Porou, Ngati Kauwhata, Ngāi Tahu) and the Digital Natives team.

“We talked about mythology, oral traditions and we were able to show them some of the stories and resources we are creating, Hori says.

“We got them to brainstorm tech-kanga – putting a Māori lens on appropriate use of technology.”

One of the highlights of the wānanga was a chance to go and see Maimoa perform their hit song Wairua. Their song bumped Justin Bieber off the top of the iTunes NZ music chart, something that Tamahou Thoms (Ngāti Kurī) says is a sign that you can achieve greatness while staying strong to your Māori heritage.

“It shows rangatahi that they can make a career out of writing and performing songs in Te Reo Māori at a young age. It’s key that rangatahi see Māori songs appealing to a mainstream audience.”

It takes just one generation to lose a language and three to get it back. The rangatahi attending the symposium did not seemed overwhelmed by this predicament they were simply too busy engaging in activities that celebrate their culture and heritage. With Kotahi Mano Kāika established in the year 2000, it is amazing to see the progress made inside one generation.