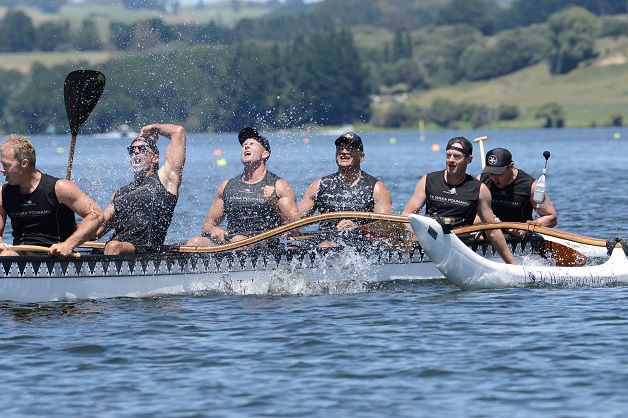 Aoraki Matatū celebrating their win at the 2016 Nationals.

A waka ama team with proud Ngāi Tahu connections is set to compete in the IVF Va’a World Club Sprint Championships in Australia in May 2016.

The team, Aoraki Matatū, from the Te Waka Pounamu club based in Whakaraupō / Lyttelton Harbour, will be competing in the Masters V6 500m & 1000m competitions, and they will also be pairing with former world champion Auckland-based crew Pineula to compete in the Masters V12 500m event. Two of the crew, including Ngāi Tahu paddler Adrian Tukaki (Nō Taumutu) is also competing in the V1 (singles) 500m event.

Ngāi Tahu members Iaean Cranwell (Ngāi Tahu – Wairewa), Craig Pauling (Ngāi Tahu – Taumutu) and Adrian Tukaki (Ngāi Tahu – Taumutu), along with Todd Jago (Ngāti Raukawa), Jack Wormald and Ross Gilray have been paddling together for over 10 years and have been going the extra distance to prepare, believing they are going into the event with a strong chance of coming home with a medal.

Iaean Cranwell said that once the team won gold at the 2016 Nationals there was no option but to take on the world’s best, which includes the much fancied Tahitian teams.

“We have been lucky enough to receive sponsorship from Te Rūnanga o Ngāi Tahu, Te Puni Kōkiri, Bayleys Real Estate, Concept2 as well as support from our uniform provider Strongarm Paddle Gear and Rino Tirikatene, Member of Parliament for Te Tai Tonga. We’re very grateful for all the tautoko, which has allowed us to fulfill our goal of competing at the world champs,” he says.

Fellow team member, Craig Pauling says that the team’s strongest event is the 6 person 500 meters, but he says anything could happen. Craig attended the last world champs in Rio 2014 with fellow crew members Jack Wormald and Ross Gilray so has some idea of what to expect and how hard the competition will be.

“Our crew and club members have a bit of history in competing at the worlds. But this is definitely the first time a whole team from Te Waka Pounamu has gone and we are hoping to do the club we established in 2000 proud,” he says. 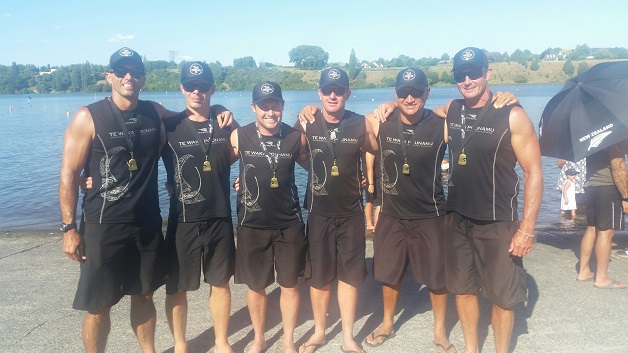 Aoraki Matatū with their gold medals from the 2016 Nationals.

The world championships take place at Lake Kawana on the Sunshine Coast of Australia from 5-15 May. Iaean says that after the 2016 Nationals, team members decided to focus on their diets, cutting back on things like alcohol and sugar.

“We’ve largely stuck to that because for us, the pre-race routine will be very important. You need to ensure you get your heart rate up before the race and that you have proper hydration, food and nutrition,” he says.

“We didn’t know all this stuff five to ten years ago and we’d just show up at the start line and race,” he says.

Craig Pauling says one of the big challenges they’ll face is the turnaround time.

“At the world championships we may only have one or two races a day. That is vastly different to what we are used to at Nationals. Having only one race a day means you have to give it all in one moment, you have to make sure you’re ready to race,” he says.

Going into the world championships, the team will probably be seen as an underdog.

“Waka ama is the number one sport in Tahiti and they are normally the teams to beat, but after having a look at them in Rio in 2014 I’m confident we can be up there with them,” says Craig.

Tahu FM will be catching up with the team on Monday 9 May while they are in Australia so tune in to hear how their trip is going.

More information on the event can be found at the following links: