The Waitangi National Trust opened its new museum on Waitangi Day. Now open to the public, it houses the permanent exhibition Ko Waitangi Tēnei: This is Waitangi, relating stories of Waitangi – its people, the place and the Treaty.

This is no ordinary exhibition. It is thoughtfully assembled and the curation is expertly punctuated with a clear narrative. Progress through the exhibition provokes empathy for the events that play out, the players and their fates. Māori and European ideas of land, trade and settlement are presented and contextualised against a timeline of arrivals to Aotearoa. Opinions form naturally and without persuasion; the effect is compelling.

Like the English exhibition text, the parallel Māori language is easily accessible and elegantly matches the historic manuscripts in style and form.

The exhibition concludes with images of contemporary New Zealanders together with their individual and varied views of the Treaty. It delivers an opportunity for enriched perception having neither excluded or patronised its audience.

Another feature of the new museum is Te Whārikī kia mōhio ai tātou ki a tātou, a pounamu kōhatu (greenstone boulder), gifted to the Waitangi National Trust and the people of Ngāpuhi for the museum, by Ngāi Tahu/ Ngāti Waewae. The pounamu is a composite of many varieties of stone including kawakawa and kahurangi, and was sourced from the Toaroha River, a tributary to the Hokitika River on Te Tai Poutini (the West Coast) of Te Waipounamu (South Island). It weighs approximately 74kgs. 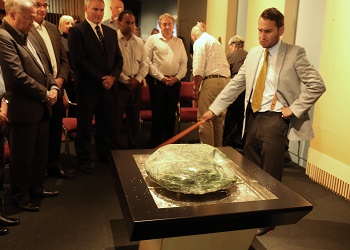 Ngāi Tahu representative Jymal Morgan performs a karakia at the opening of the Waitangi Museum on behalf of Te Rūnanga o Ngāi Tahu.

Te Whārikī kia mōhio ai tātou ki a tātou means “The tapestry of understanding” – an understanding that cannot be woven by one strand alone. Only by working together can a complete ‘tapestry be achieved. This very special pounamu kōhatu embodies the different strands that bind the peoples of Ngāpuhi and Ngāi Tahu; and the ties that bind Te Tai Tokerau (Northland) and Te Waipounamu.

Te Whārikī kia mōhio ai tātou ki a tātou also celebrates the relationships all iwi share under the korowai (cloak) of the Treaty of Waitangi and the call for all people of the world to come and visit Waitangi, to learn about the history of this beautiful country in a safe and comfortable environment. The name also references the role the pounamu kōhatu plays in the museum itself, weaving together people and cultures.

Waitangi has always held a special place in the hearts and minds of Ngāi Tahu as the place where the Treaty of Waitangi was first signed before making its way to south to Te Waipounamu, where it was signed in three locations: Ōnuku (Akaroa), Ōtākou (Dunedin) and Murihiku (Southland).

We congratulate the Waitangi National Trust and the curators of this remarkable exhibition and urge everyone to see it.