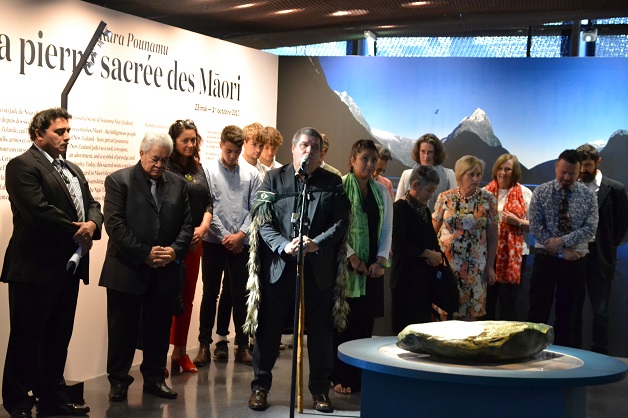 Tim Rochford speaking at the opening of the exhibition in Paris.

Earlier this month an exhibition of more than 200 pounamu taonga opened at Musée du quai Branly-Jacques Chirac, in Paris.

The exhibition was created by Te Papa with collaboration from Ngāi Tahu and features pounamu taonga from all tribal areas of New Zealand.  The exhibition is called ‘La pierre sacrée des Māori’ (the sacred Māori stone) and will run from May to October 2017.

Lisa Tumahai, Interim Kaiwhakahaere of Te Rūnanga o Ngāi Tahu says the exhibition is a great opportunity to showcase pounamu to the world.

“Throughout Māori history, pounamu has been regarded as a taonga and many share a strong spiritual connection with the stone,” she says.

“It is wonderful  that these beautiful taonga can be shared around the world through this exciting exhibition.”

The museum is located at the foot of the Eiffel Tower with collections focused on the arts and civilisations of Africa, Asia, Oceania and the Americas. As Lisa sees it, this exhibition brings pounamu to the heart of Paris. Which is fitting for a stone that is so close to the heart of so many whānau, and indeed all New Zealanders.

The exhibition tells the story of this most precious of stones, its significance for Māori, and its enduring value in both ancient and contemporary eras.

The earliest pounamu pieces in the exhibition may be the toki (adze blades), tools used for working with wood. Some are thought to originate from early settlement in Aotearoa, some 700-800 years ago, and emulate replicate East Polynesian adze shapes.

“We are delighted to bring some the most precious treasures of New Zealand to the heart of the French capital,” Dr Hakiwai said.

The Musée du quai Branly-Jacques Chirac is also delighted to be the first museum in Europe to host the exhibition.

“Our museum has strong and intense ties with New Zealand cultural institutions, illustrated by photographic acquisitions of New Zealand artists such as Michael Parekowhai and Fiona Pardington, and by the exhibition Māori. Leurs trésors ont une âme (Their treasures have a soul) presented here by Te Papa in 2011.”