The blessing and unveiling of He Rau Mahara, a Te Rūnanga o Ngāi Tahu publication paying tribute to the Ngāi Tahu soldiers of WW1, was a chance for those descendants of veterans interviewed to celebrate their Papa, Pōua or great uncle and reflect on the trials they faced in the Great War.

He Rau Mahara, unveiled on the 16th of November at a special ceremony attended by whānau of soldiers, was also presented to iwi members during Hui-ā-Iwi held at Tuahiwi Marae last weekend.

Arapata Reuben thanks whānau for their contributions to He Rau Mahara

The soldiers whose stories have been uncovered in He Rau Mahara fought on battlefields far from home, with some of them never to return to their homes in Te Wai Pounamu. “Their names are not often celebrated in our tribal history, but the struggles and sacrifices they went through deserve our recognition,” says Te Rūnanga o Ngāi Tahu Whakapapa Unit Manager Arapata Reuben. “He Rau Mahara is about creating a taonga that recognises the contribution they made.”

Over the past four years, the Whakapapa Unit has been working with the whānau of Ngāi Tahu soldiers, conducting interviews and poring over diaries, letters, and military records to uncover stories that have never been shared. All of the families had stories to share – Fred Ryan was no different, telling a tale of loss and reconciliation.

My second cousin Victor Spencer was court martialled for desertion and faced the firing squad,” Says Fred. “in 1996 we were supported by our local MP to take a bill to Parliament to have him pardoned.” In the year 2000 Victor Manson Spencer was officially pardoned for the offence of desertion. Fred and some of his whānau were able to visit the military cemetery in Belgium where he was buried. “I tell you it was quite emotional, four of us had a tangi at his graveside before leaving some items from home at his headstone. 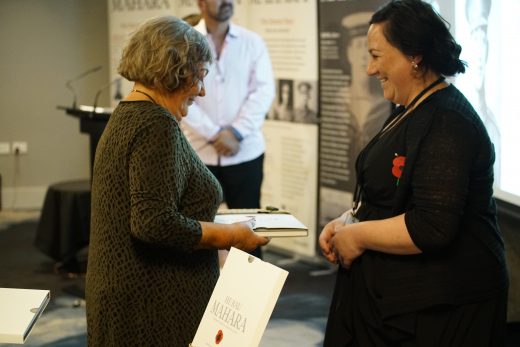 Allanah Burgess, project lead for the He Rau Mahara project, says she has been truly struck by the stories and materials that their research has brought to light. She remembers working on the story of Private George Skerrett (Ngāi Tahu, Ngāti Māmoe). “The Skerrett whānau sent me a DVD of an interview with George. As soon as I watched it I knew we were doing something special to showcase our tīpuna.” George was in the Otago Infantry Battalion, and served in Egypt and Gallipoli. For his service he received the British War Medal, Victory Medal, Gallipoli Lapel Badge, Gallipoli Medallion, and 1914 –15 Star for his services.

In the interview, George describes the landing at Anzac Cove on April 25, 1915, saying:

“We didn’t land until three in the afternoon. Ashore it was frightful terrible … We started to climb up Walkers Ridge, following the infantry up. Men were falling everywhere. We were right behind them, picking them up and dressing them the best way we could. I was part of the advanced dressing station. Stretcher bearers were getting them [the wounded] down to the beach as quickly as they could. That was going on all night.”

“There was shrapnel coming down all the time. Day and night. The shells detonated in the air and the shrapnel came down like rain. I was walking along and I heard this bang, and a bullet landed near me. It was a sniper. So I lay down for a while and then got up and started to walk, when all of a sudden ‘bang!’ – another bullet just missed. So I lay down and pretended to be dead.”

George paints a grim picture of his experience in the theatre of war. Some of the young men profiled in He Rau Mahara returned home from WW1 only to join the ranks of our allies again when WW2 broke out. It is hard to comprehend the bravery required to answer this call to arms which only reinforces the sentiments from the whakapapa unit that we should pass on these stories of selflessness to celebrate our Tīpuna and inspire younger generations.

This book plays an important part in sharing the accounts of Ngāi Tahu service men and celebrates their extended families who carry on their stories and legacies. He Rau Mahara is available for purchase online via the Ngāi Tahu website.