Remnants of the past
What can ancient raranga fragments tell us about our tīpuna? 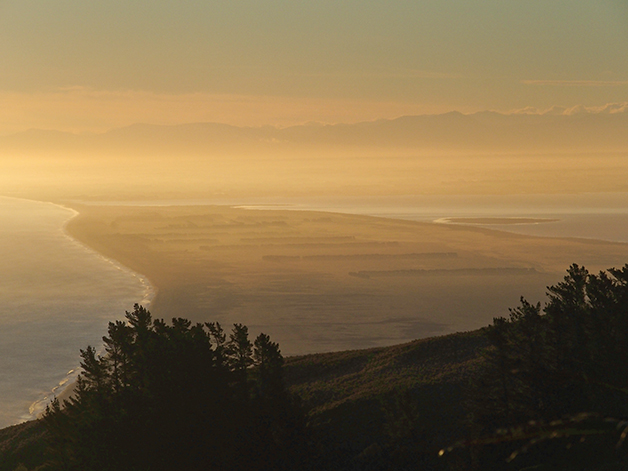 Ngāi Tahu weaver Tania Nutira still remembers the day she stood on the sand dunes of Kaitōrete Spit near Taumutu in 2003 and looked down on ancient raranga fragments that had just been unearthed.

“At that moment, I had an overwhelming sense of being privileged to be involved in the discovery. It was like my tīpuna were there,” says Tania (Ngāi Tahu – Ngāti Moki, Ngāi Te Ruahikihiki, Irakehu).

“Just to stand there and know I could have been a direct descendant of whoever had camped or worked there was very special. I remember looking at the archaeologists and thinking that for them, it was just a job; they didn’t have that connection to an ancestor.

“It was a very moving experience for me – for all of us from Taumutu in fact. We wanted to be involved, so when we were approached, we jumped at the chance to be actively involved in recovering any relics from the Kaitōrete Spit site.”

The remains of the burnt shelter at the western end of Kaitōrete Spit were first discovered by Dan and Alison Witter in January 2000. Because of the threat of further damage to the site, the Department of Conservation, which manages the land, commissioned two small salvage excavations that were carried out in 2000 and 2001. After a storm exposed more of the site in 2003, Taumutu Rūnanga members were invited to take part in a joint excavation involving the then New Zealand Historic Places Trust, the University of Otago, and the Department of Conservation.

“The raranga fragments were still in the ground when I first saw them,” Tania says. “But I immediately wondered what the beach might have been like when our tīpuna camped there – was it more sheltered by sand dunes then? Was the sea further away?

“It was an amazing discovery. I don’t think any of us realised how old it was then, but without being told, I knew it was an important find. I felt a real sense of excitement realising that I might have been looking at something from pre-European times; that we were possibly the descendants of the hapū group that had camped there.”

The discovery of pre-European textiles is rare in New Zealand’s archaeological history because of their fragile, perishable nature, and archaeologist Chris Jacomb says examples for which there is any chronological certainty are even more rare.

He was working for the New Zealand Historic Places Trust (now Heritage New Zealand Pouhere Taonga) at the time of the Kaitōrete Spit find and says the discovery of a range of carbonised artefacts that had been preserved in a simple, burned-out shelter provides insights into the history and development of Māori weaving technology.

After radiocarbon dating, the raranga fragments – more than 1000 pieces of varying sizes in all – were shown to be from the early 15th century, making them the oldest discovered in New Zealand. They were thought to include historic examples of whāriki (floor mat), a small kete (bag), possibly a tātua (belt), and a larger fragment of finely woven material that may be part of a cloak, waist garment or shoulder cape.

Chris Jacomb says the fragments demonstrate that Māori in the 15th century were already competent in a specialised weaving technology known as whatu aho pātahi – single pair twining, and the preparation skills needed to create soft pliable fibres (whatu, or muka in the North Island), for weaving. There is evidence of tags attached to the kaupapa, the first evidence of what we still see in fine cloaks today; and the fineness of the material used and the close spacing of both the warp and weft rows could indicate it was part of a fine cloak.

“This find showed us that weaving techniques were well developed very early in Māori history in New Zealand, and these technologies have stood the test of time. They are still used in cloak-making today,” he says.

In 2011, a Department of Conservation worker conducting archaeological assessments around the Roxburgh Gorge discovered old raranga fragments in a secluded cave. 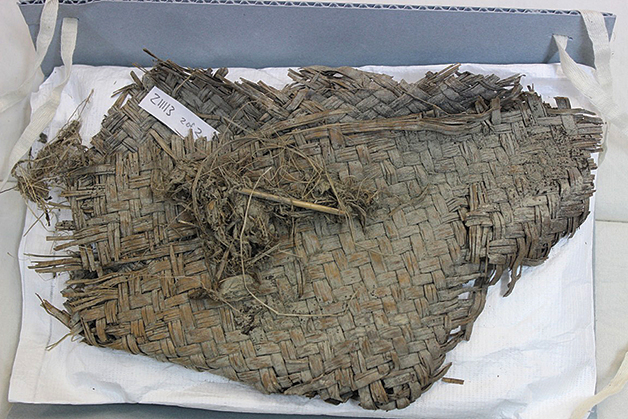 The two nearby rūnanga, Te Rūnanga o Ōtākou and Kāti Huirapa ki Puketeraki, agreed to put the taonga in the temporary care of Otago Museum. More recently the raranga fragments were moved to the Department of Applied Sciences – Clothing and Textile Sciences at the University of Otago for further analysis.

Huia Pacey (Kāi Tahu, Tūwharetoa), the Māori heritage advisor (Pōuarahi) for Heritage New Zealand (Southern Region), enabled the transfer at the request of Kāi Tahu ki Otago and representatives from the rūnanga, who had requested that Dr Catherine Smith, a textiles specialist at the University of Otago and a senior lecturer in applied sciences, lead the formal analysis.

Huia says the decisions around destructive versus non-destructive analysis of rare raranga samples is probably the biggest headache for rūnanga.

“You struggle with the notion of ‘destroying’ or ’hurting’ a taonga (for radiocarbon dating) and you have to balance that against the opportunity to learn, which will not only add more to your kete mātauranga, but will also help you make decisions about what to do in the future.
“The decision also needs to be tested against the needs of the taonga itself – sampling sizes are getting smaller and smaller as technology improves, but if you only have a tiny piece of the raranga available, that will possibly mean compromising the piece. You have to ask, ‘Do I feel confident that the detachment of a tiny piece and its possible destruction will not compromise the taonga and therefore impact on my role as kaitiaki?’

“That has to be decided on a case-by-case basis I think.”

Huia says the fact that there were three good-sized fragments found in the Roxburgh cave made the rūnanga choice about analysis an easier one.

“The raranga fragments, along with other taoka I’ve seen pulled from the archaeological record, emphasise my connection to my tīpuna, my hapū, my iwi, and the whenua. It’s hard to describe but it totally underpins who I feel I am as Kāi Tahu.”

“I shared the carrying of the taonga with Rachel Wesley from Ōtākou. I think we both felt the mana of the occasion,” she says.

Phyllis believes analysis of the fragments is an important step in learning and understanding more about the lifestyles of tīpuna.

As a weaver herself, Phyllis says seeing the taonga has affirmed for her that she and he weaving group are doing exactly what their tīpuna did. “We’re following tīpuna traditions. We’re on track and as a learning weaver, that’s a lovely connection.”

“It was mind-blowing. It reinforces how far back our whakapapa goes and what a long history we have on the land – not just as Kāi Tahu but also as Kāti Mamoe and Waitaha.

“The raranga fragments, along with other taoka I’ve seen pulled from the archaeological record, emphasise my connection to my tīpuna, my hapū, my iwi, and the whenua. It’s hard to describe but it totally underpins who I feel I am as Kāi Tahu.”

Weaving links Māori directly to eastern Polynesian ancestors through inherited techniques and practices. The plaiting and twining methods early Māori brought with them were successfully adapted to the new plants they found here, when they discovered that the paper mulberry – used to make bark-cloth garments in Polynesia – would not thrive here. It now seems likely they adapted their existing weaving skills to plants like harakeke, kiekie, tī kōuka, and pīngao to create the protective clothing they needed for New Zealand’s cooler climate.

They also learned to extract the inner fibre of harakeke to create whītau, or muka, twining it together to form the foundation of cloaks. This was achieved by adapting the whatu, the single-pair twining technique originally used to make fish nets and traps.

Chris Jacomb says this was evidenced in a cloak, different in construction to the Kaitōrete example, that was found in a burial cave on Mary Island in Lake Hauroko, Fiordland in 1967. It was dated to the 17th century and showed a simpler construction of single-pair twining with dog and bird skins and moa and weka feathers attached.

“It was a technique used throughout Polynesia, where it was applied to minor items of clothing and fish traps.” 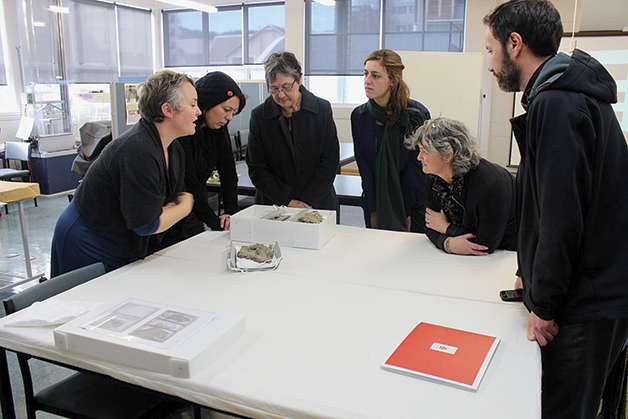 Dr Catherine Smith says archaeological textile fragments are rare finds all over the world because of their perishable nature. However, she says Central Otago has ideal preservation conditions for pre-contact Māori textiles because of its dry climate. The key Kaitōrete Spit find though has prevailed because the plant material was burnt, carbonising it and making it very stable.

“If a fragment is made of a New Zealand plant there’s a strong argument for it being of Māori origin, so there are solid analytical reasons to analyse it so we can establish customary rights and responsibilities for rūnanga,” she says.

“Taking samples of a fragment for analysis often has important connotations for rūnanga and a complex dialogue often takes place. But as scientific techniques improve and we can take much smaller samples, the information gained for rūnanga can be invaluable.”

Dr Smith says that the Kaitōrete Spit sample shows there was diversity in the different kinds of weaving being executed among early Māori and that they had absolute mastery over their new plants by the early 15th century.

“That piece was beautifully woven, and when you see that level of expertise in the first 100 years of New Zealand settlement, you know early Māori arriving in a new place had quickly learned to cultivate and harvest the new plants they encountered, and weave them to a very high level of skill.

“In the past, we thought that technology in New Zealand started simply and became more complex over time. But in fact, a taonga like the Kaitōrete Spit fragment shows people arrived here with a lot of existing knowledge and well-developed adaptation skills. These early textiles are vitally important because they show how early Māori adapted to new plants and conditions very quickly.”

She says the earliest textiles are not crude or basic. The Kaitōrete Spit sample is 200 years older than the Lake Hauroko piece, but it displays very complex fine weaving skill.

Dr Smith says it is also important to remember that textiles were not all about basic clothing. In many cases they could be indicative of a developed social structure, where fine cloaks may have been worn by people of higher status.

Early Māori also had to master new plants quickly to be able to hunt, catch and store the food they caught. They had to make cord, line, traps and baskets for kai.

“Understanding plants in prehistory was just as important as finding food,” she says.

“Cultivating plants, preparing materials for weaving, and making textiles like string, bags, baskets and clothing probably took up as much time as actual food gathering. We know the first people who settled here were well-used to adapting. We know they could recognise similarities to the plants they knew in Polynesia; and we know they came with an established social structure and a whole basket of rich, complex knowledge. If you can navigate the Pacific, you have the skills to weave.

“It’s easy to think early life in New Zealand was just about survival but when you look at the Kaitōrete Spit raranga fragments, you see it was also about aesthetics and mastery of technique. That indicates a rich social agenda beyond survival was already present in the early 15th century. That gives so much humanity and insight into the people who were first here.

“There is a really rich story to be told about this part of the world and it’s about the relationships between plants and people. That story is partly being told through these amazing old textiles. It’s a great legacy. It’s a real Ngāi Tahu legacy.”