Researching aquaculture for the future 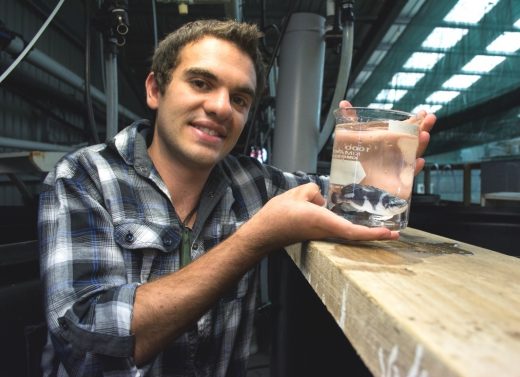 Matt holding a second generation hāpuku produced in 2013 as part of his PhD research at NIWA’s Bream Bay Aquaculture Park – allowing the life-cycle of this species to be completed in captivity for the first time in the world. Photo by Alvin Setiawan, NIWA.

Ngāi Tahu PhD student, Matt Wylie knows a thing or two about fish and he hopes with his research and knowledge of aquaculture he’ll be able to contribute to tribal commercialism.

After completing a Master of Science in Zoology at the University of Otago on the reproductive biology and captive breeding of the giant kōkopu – one of five whitebait species, Matt, 27, is now studying towards a doctorate in zoology specialising in aquaculture and fish reproduction in collaboration with the National Institute of Water and Atmospheric Research (NIWA) Breeding and Genetic Technologies Programme and the University of Otago.

“The aim of my research is to increase our understanding of hāpuku (groper) reproductive physiology (biology). Specifically, the conditions required for spawning, broodstock management and improved egg quality and collection under aquaculture (farming) conditions, which to date, have proved to be challenging.”

“I am also interested in studying the reproductive biology of other fish that we could potentially use for farming – especially at a time when the industry is trying to expand,” he says.

Matt’s love for fish-farming started as a hobby but during his Master’s studies at Otago University, he realised that it could be a possible future career option.

“I chose to study aquaculture because it is one of the world’s fastest growing primary industries and has been identified as a sustainable food source when done responsibly and farming practices are based on environmental carry capacities”.

“I’ve always been interested in science and growing up on a sheep and beef farm in a small Southland farming district, Kaiwera, my parents exposed me to the natural world and food production at a very young age,” he says.

His passion for aquaculture and zoology has led to tangible improvements for freshwater habitats. In 2013, Matt along with a group of fellow ecology, science communication and planning post-graduates established the Working Waters Trust, which is available to support local rūnanga, aims to raise awareness, protect and restore the habitats of native fish, in particular whitebait species and galaxiids.

Matt’s research efforts have taken him overseas – from India to Argentina, Portugal and Spain. Last year, at the World Aquaculture Conference in Adelaide he received an award for his presentation about his PhD research on hāpuku. More recently, Matt travelled to Japan and South Korea where he met with other international aquaculture experts and visited various aquaculture research institutes.

“In July this year, I spent about a month in Japan visiting aquaculture institutes and fish farms. It was very interesting, proving an important opportunity to network and it gave me some direction for the future. It also set a very high standard for aquaculture research and development. During that time I also presented PhD research findings at the World Aquaculture Conference on Jeju Island in South Korea.”

During his time studying, Matt has received scholarships like the Kā Pūtea Grant through Te Rūnanga o Ngāi Tahu. He says receiving financial support from the iwi made a big difference and it allowed him to focus solely on his studies.

When Matt finishes his studies he hopes to give back to Ngāi Tahu somehow and share with whānau his knowledge and whakaaro on aquaculture and zoology.
“It would be gratifying if I could help Ngāi Tahu make investments in aquaculture and research new species our iwi could possibly farm – I would hope that with my aquaculture knowledge I may be able to assist rūnanga and whānau to explore their own aquaculture projects too.”

If you or your whānau would like to find out more about the Working Waters Trust please visit the website: www.workingwaterstrust.org