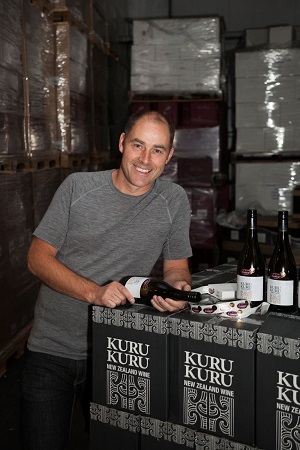 When Hayden Johnston of Central Otago came to name his export brand wine, he settled on the name of his Ngāi Tahu ancestor, Kurukuru.

“Kurukuru was my great-great-great-great-grandmother from Stewart Island. She married Scottish-born seafarer, Captain James Joss, who purchased land on the island from Hone Tuhawaiki in 1830,” says Hayden.

Today the Kuru Kuru brand is distinguished by the tā moko design on its label and by the significant accolades the wine has received since it was launched in 2008. Most recently, Kuru Kuru Pinot Gris 2014 was named the top Pinot Gris in New Zealand by Cuisine magazine. Kuru Kuru Sauvignon Blanc was also named number 3 out of 217 wines at the Cuisine Sauvignon Blanc Tasting last year. It won gold at the Air New Zealand Wine Awards, as did Kuru Kuru Pinot Noir 2013. Hayden’s Tarras Vineyards wines have also won international acclaim.

For Hayden, 44, seeing both his Tarras Vineyards and Kuru Kuru wines doing so well makes the last decade of hard work worthwhile – and all the more impressive given his background as an accountant rather than as a winemaker.

That dramatic career turnaround came about when Hayden returned from the United Kingdom in 2001. He’d been working there as an accountant since 1998 but when he was hit by a car while out running, his time in hospital gave him time to think.

“I’d just run the New York marathon and here I was in hospital with major leg injuries. Dunedin suddenly seemed like the best place to recover,” he says.

“I had money saved and when I got back to Central Otago I had a new appreciation for just how much I loved the land. I grew up here and I’ve always felt a strong connection to the land.” 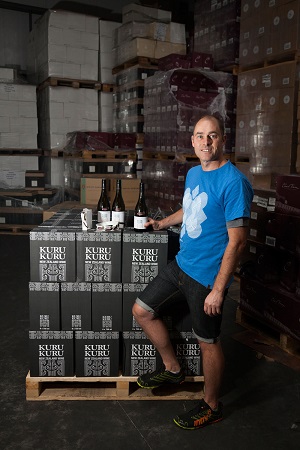 The hard work has paid off for Ngāi Tahu winemaker, Hayden Johnston.

It was that that drove his purchase of two blocks – one in Earnscleugh between Alexandra and Clyde; and one at Bendigo near Tarras.

“The idea of combining some kind of business with my appreciation for the land seemed incredible and since the wine industry had been growing in Central Otago since the late 90s, it seemed like a good prospect to research.”

He duly set about planting his Bendigo land in 2002. Pinot Noir vines were an obvious choice since it had already become a point of difference for the region. His first wine under the Tarras Vineyard labels was a Pinot Noir Rose, released in 2006, which was followed by Tarras Vineyards Pinot Noir.

By 2007, with the help of Alsace-born winemaker, Antony Worch and a partnership with overseas investors, Hayden extended his labels to include Tarras the Canyon and Tarras Steppes. Then came Kuru Kuru.

The latter came about after Hayden returned to the UK in 2003-2004 to secure markets for his wines. He established the NZ Wine Distribution Company to import New Zealand wines into the UK and Ireland.

It was a tough market though and a combination of factors put immense pressure on him.

“Everything seemed to happen at once. The financial crisis hit, my Central Otago business partners decided to move out of wine production, the roof on the UK warehouse collapsed under snow taking out all my UK wine and my key UK outlet went into receivership. That was a highly stressful time but I managed to keep fighting.”

Pulling through the crisis meant selling his Earnscleugh home but he managed to keep his vineyard, buying out his business partners in the process. That was three years ago and today Hayden looks back on the dark times with a renewed sense of appreciation.

“They were dark days and becoming homeless meant moving in with older sibblings for a time. But my wine business has grown exponentially since then. This year I’m producing around 8,000 cases of wine and our labels have done spectatcularly well in a short time – and I’ve just bought a new house.”

While developing his business, Hayden says he has gradually been getting more involved with his Ngāi Tahu roots.
“I’m grateful for and fascinated by my family’s Ngāi Tahu history. I have a genuine curiosity to learn much more and I’d like to find more ways to become involved with the iwi,” he says.

In the meantime, his key goal is to continue producing the award-winning wines that have already established Tarras Vineyards and Kuru Kuru as labels to look out for on New Zealand wine shelves. There’s a new range of wines called Joss Bay and he also has plans to develop his Earnscleugh property.

“It’s an old orchard area so I’m planting organic apples in partnership with a local grower and I plan to make an organic apple cider. It’s a nice fit with wine and I want to build a tasting room that will become the heart of Kuru Kuru and the cider operation. It’s been a difficult journey at times but I’m very excited about the future.”