Tucked away in an idyllic rural setting in North Canterbury, the talented Malcolm whānau have created their own world brimming with music, laughter and even their own secret language. Now, the creative talents of three teenage girls are set to launch the family to stardom. Kaituhi Anna Brankin sits down with proud parents Gordon and Sally and their effervescent daughters Aleisha (18), Olivia (16) and Nicola (13) to learn more about their shared passion for music and performing. 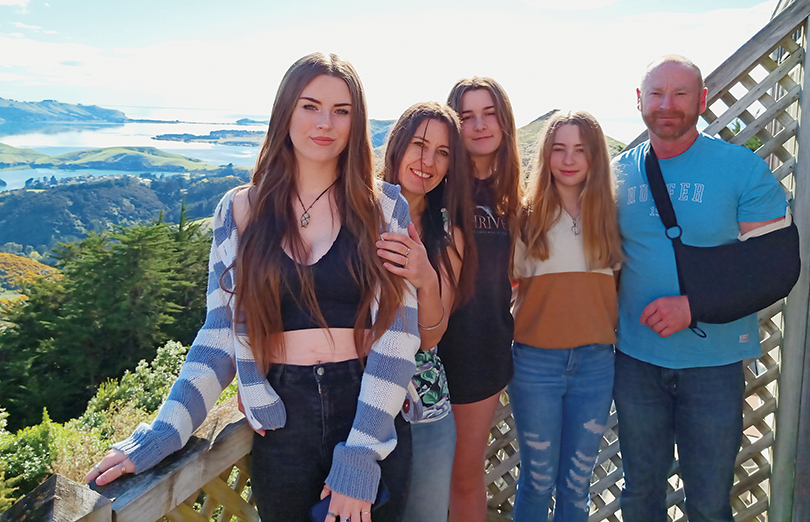 “They’ve always been performers, right from when they were little kids – they’d work together to put on plays and little shows for us,” says Gordon as we sit in the warm and sunny Malcolm whānau home. “It’s quite weird, because to us they’re just our kids. It wasn’t until other people started talking about how talented they are that we really thought about it.”

Thanks to their success over the years in competitions, talent quests and local performances, the three Malcolm girls have always been well known in Rangiora for their music. More recently, however, social media has been the spark that has set the Malcolm whānau alight with chances of global fame when Aleisha was discovered by music executive Alesh Ancira.

“I’ve been putting up videos of myself singing covers for years, since I was 14 years old. I guess I always hoped, but I never really thought anything would come of it,” laughs Aleisha. “And then Alesh contacted me after coming across my videos for the most random reason – because our names are so similar, Aleisha/Alesh!”

After exchanging a few messages last year, Aleisha’s next contact with Alesh came in April when she was competing in New Zealand’s online competition, Lockdown’s Got Talent. She had shared her video entry to garner support for the competition, but to her surprise Alesh came back offering a very different prize – to help her write and release her first single.

The close-knit trio have always done everything together, which is reflected in the way they finish each other’s sentences, perform impromptu harmonies … they have always loved singing and performing together.

When Gordon and Sally heard about it their first concern was to make sure Alesh was genuine. “She’s only 18 years old, you’ve got to be cautious,” Gordon says.

Fortunately, Alesh’s credentials spoke for themselves – he is the CEO of the Eclectic Agency, a boutique strategy and management firm based in Beverly Hills, Mexico and London, whose clients include Akon and Ratel Geneve.

Although it was Aleisha’s singing that first drew his attention, Alesh quickly learned the Malcolm whānau come as a package deal. Since April, he has become a fast friend to the entire family, with lockdown providing the perfect opportunity for regular video calls and group chats as they got to know each other and learned more about the process of producing a hit single.

“It’s like building a house,” says the ever-practical Gordon. “There’s so much complexity to it. Before this experience, I would have thought that it was just a matter of writing the song and recording it. But there is so much more to it.” 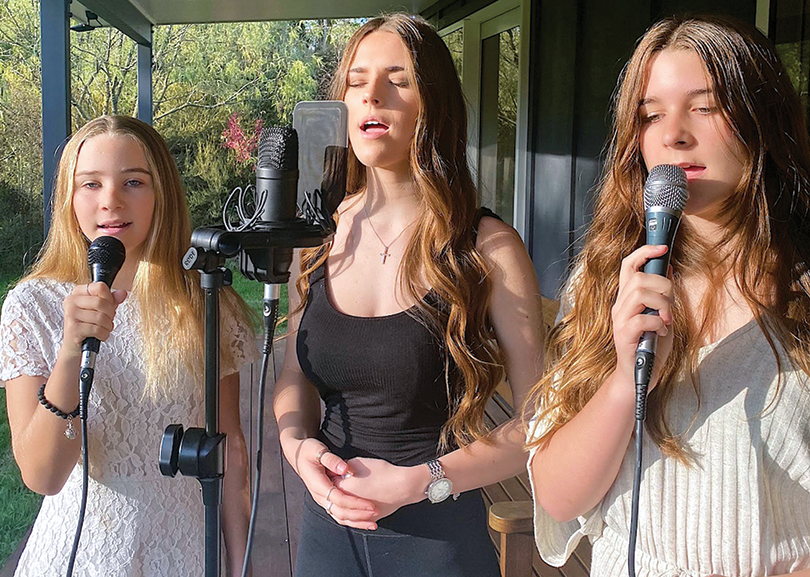 Above: The talented Malcolm trio.

Alesh sent sample backing tracks for Aleisha, and once she identified the sound she wanted to work with she wrote the lyrics in a single sitting. The next step was matching Aleisha with producer DJ Fito Silva as well as sourcing support vocals from a reggae artist based in Moscow.

“Of course this all started during lockdown which in itself was really strange,” Aleisha reflects. “This is the first proper song that I’ve worked on, and if we hadn’t been in lockdown Alesh would have come straight here. Instead I was literally just at home, sitting out on the patio writing.”

The COVID-19 pandemic posed another challenge when it came to finding somewhere for Aleisha to record her vocals in August. “We were really conscious of the changing alert levels and worried that we might go into lockdown again and have to wait forever,”
she said. “Unbelievably it turned out that a family friend in Rangiora had a full-on proper home recording studio so we got in there the very next day, recorded it and sent the files away.”

Once the production team have finished working their magic, Aleisha’s debut single will be released. Entitled Control, the track consists of an upbeat and catchy rhythm, overlaid by Aleisha’s distinctively haunting vocals. The lyrics speak to her determination to remain true to herself as her career takes off, and avoid the notorious pitfalls of the music industry.

“It’s overwhelming – one minute I’m a normal teenager, the next I’m being contacted by some guy in Mexico and I’m writing a song with him,” she says. “The words can be interpreted in many different ways but without pinpointing it too much, it’s about staying in control of your own journey when there is potential to have it taken away from you.”

It goes without saying that Olivia and Nicola are Aleisha’s biggest supporters as her star begins to rise. The close-knit trio have always done everything together, which is reflected in the way they finish each other’s sentences, perform impromptu harmonies and even initiate me into the secrets of their made-up language. They have always loved singing and performing together, but Olivia remembers one stand-out moment.

“We were watching Pitch Perfect and I remember hearing the harmonies that Beca and Chloe sing in the shower scene,” she says. “Afterwards I remember going into Aleisha’s room and saying, ‘OK guys, I know how to harmonise.’” 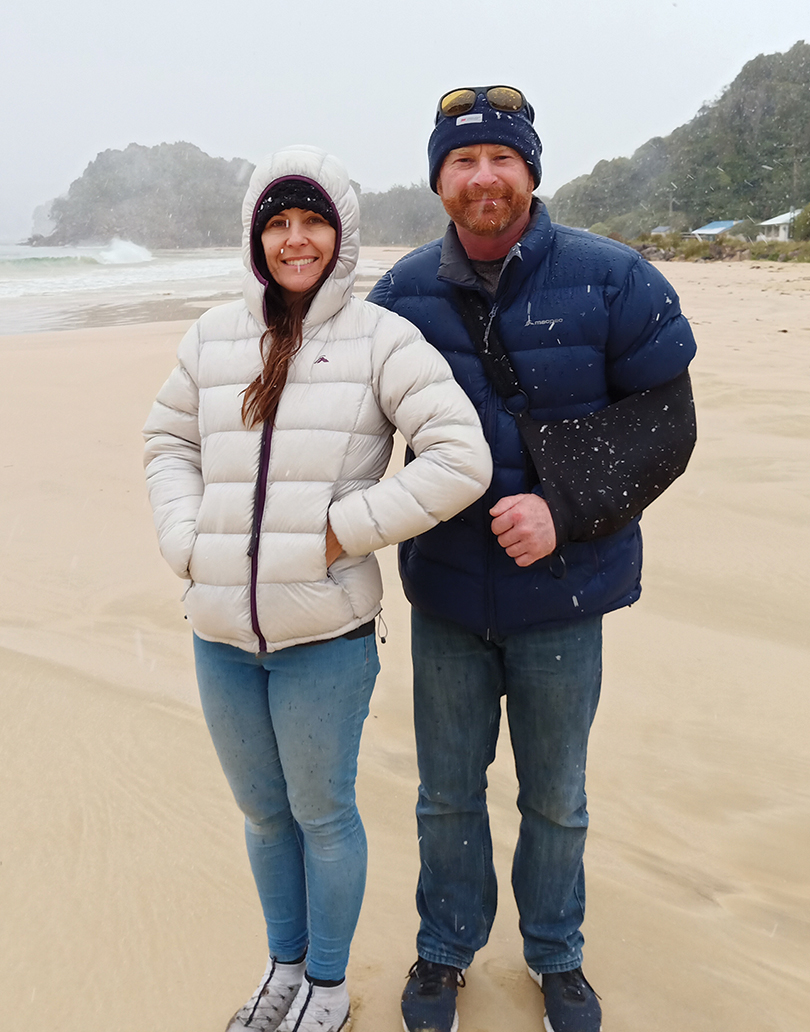 Above: Sally and Gordon on Rakiura.

After hearing this anecdote it comes as no surprise Olivia is the family’s go-to when it comes to harmonies. She has always had an instinctive understanding of how music is put together, teaching herself to play piano by ear well before she was given formal lessons or taught to read sheet music. Her talent was reflected at this year’s prizegiving at Rangiora High School when she collected a distinction award for music. Olivia is also a self-taught photographer and film-maker, with an eye for detail and creative flair that is evident across the Instagram grids of all three sisters. Consciously or not, she has created a distinctive visual brand that sets the Malcolm whānau apart.

Although the youngest by three years, no one could say the cheeky and vivacious Nicola has lagged behind. She remembers being determined to join in with her older sisters’ performances from the age of two – a drive that has served her well as she forges her own path as a budding pianist and performer. “I’ve always loved musical theatre, so my focus is music and drama,” she says. “This year I’m in the children’s cast of Joseph and the Technicolour Dreamcoat with the North Canterbury Musical Society, and in 2018 I was one of the orphans in Annie.”

“Once I traced back through the family tree I realised how strong the connection was. We registered with [Ngāi Tahu], not for any kind of benefit to us except that I wanted the girls to know their ancestry. I think it’s really important to know your roots.”
Gordon Malcolm

As Gordon and Sally realised how successful their children were becoming, they knew it was important to keep them grounded. “I’m proud of them but I’m also their harshest critic,” laughs Gordon. “We spend a lot of time with the girls, whether that’s here at home or trips that we take together. We’ve just been on a road trip all the way down the South Island, and it’s a good sign to us that even at 18 Aleisha still wants to come on family holidays.”

This trip was part of the family’s exploration of their Ngāi Tahu whakapapa – a connection discovered only four years ago by accident when Gordon’s aunt had a passport application declined because there was no record of her mother (Gordon’s maternal grandmother). A bit of digging revealed that although she had been adopted as a baby, her name had never been legally changed from the one her birth parents had given her – Charlotte Cowie.

Because she had passed away, Charlotte’s records were able to be unsealed and Gordon’s uncle began researching her background and uncovered the connection to Ngāi Tahu. “I laughed to begin with, looking at my Scottish complexion,” Gordon said. “But once I traced back through the family tree I realised how strong the connection was. We registered with the tribe, not for any kind of benefit to us except that I wanted the girls to know their ancestry. I think it’s really important to know your roots.”

Gordon and his three children descend from [Nathaniel] Bates’ marriage to Hinepū, a Ngāi Tahu wahine born at Ōtākou.

The Malcolms descend from Nathaniel Bates, a whaler who came to New Zealand in 1838 and lived on Rakiura and later in Riverton. Bates was well-known as “Southland’s most prolific father” – he had at least 31 children to three wives before coming to an untimely end when he drowned in the Jacobs River Estuary. Gordon and his three children descend from Bates’ marriage to Hinepū, a Ngāi Tahu wahine born at Ōtākou. 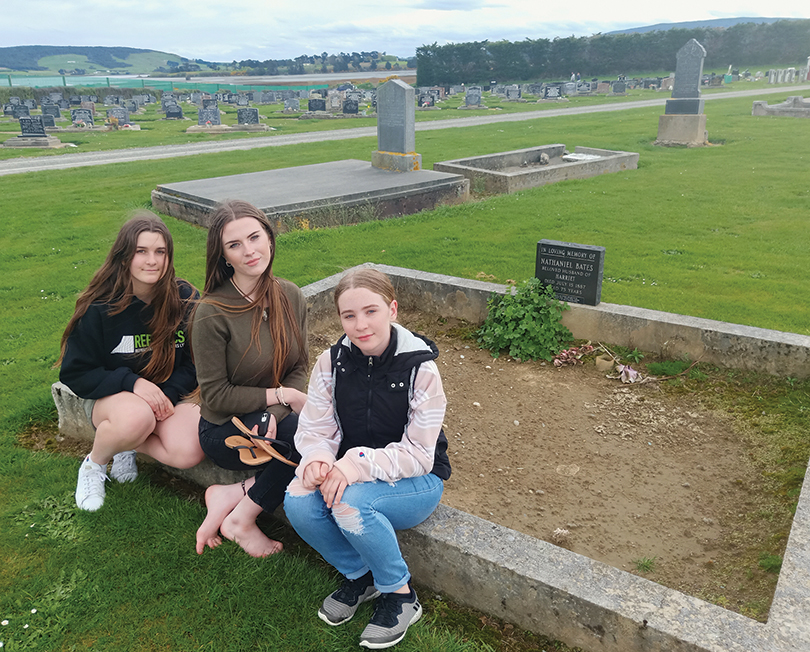 Above: Olivia, Aleisha and Nicola at the Ōraka Aparima urupā.

On their recent haerenga to explore their tūrangawaewae, the whānau visited Rakiura, Riverton and the Catlins. While on Rakiura they were caught up in unseasonable weather in late September, and Gordon recalls the magical experience of walking along the golden sand beaches next to crystal blue water and falling snow.

It was when they reached Riverton that Gordon really began to the feel the pull of his ancestral ties. “Going into Riverton, it really felt like I’d been there before,” he said. “I was walking around and constantly thinking, ‘this all seems so familiar’ even though it was
my first time there.”

A highlight was their visit to Te Hīkoi Southern Journey museum, which features an extensive history of Nathaniel Bates and his descendants. They were even fortunate enough to come across a museum staff member who showed them the Bates family files, which included letters and artefacts not on public display.

It has been a welcome surprise for the Malcolm whānau to discover their Ngāi Tahu whakapapa, and to visit Murihiku for the first time. “I had always known that there were lots of missing pieces in our family puzzle,” says Gordon. “I knew there were some questions that needed to be answered.”

His only regret is that his grandmother passed away without knowing her own heritage, which has fuelled his determination to make sure the knowledge is passed on to future generations.

That knowledge has brought yet another dimension to their vibrant family story, building on the values Gordon and Sally have instilled in their three children and adding to the warmth and aroha that fills their home. “We’ve always been very family oriented,” says Olivia. “This is just another part of it.”