A visit by whānau members of famed mountaineer Tenzing Norgay to the Ngāi Tahu rohe has been a meeting of minds and hearts, with strong similarities between our cultures, and shared experiences in the not so fine balance between conservation with tourism. Kaituhi JAMES HARDING reports. 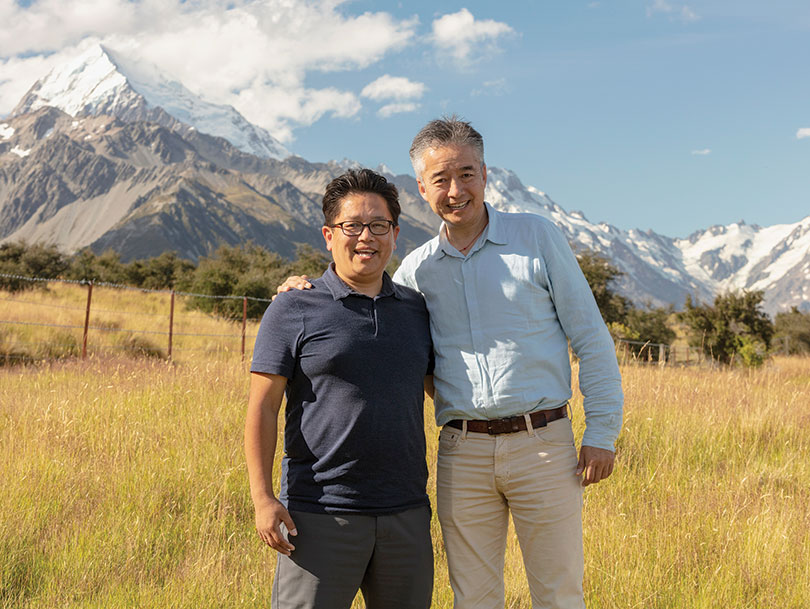 Above: Dhamey, left, and Norbu Norgay on their visit to Aoraki, where Edmund Hillary trained before conquering Mt Everest with their father, Tenzing Norgay.

“The respect of Māori people for their ancestors and for their land is profound. The culture is strong, and more purposeful than anywhere else in the world that I have visited.”

Norbu Tenzing Norgay is addressing a modest but engaged group at Tuahiwi Marae. It is a hot, blustery afternoon in late January, and a good old-fashioned Waitaha nor’wester has come out to greet the Tenzing whānau as they arrive at the marae to be welcomed by Te Ngāi Tūāhuriri. Inside the impressive new Tūāhuriri whare Maahunui II however, there is an air of coolness and calm.

Norbu, his daughter Olivia, brother Dhamey, and Dhamey’s wife Sonam have just landed in Te Waipounamu, after time spent in Te Ika-a-Māui. Their whistle-stop tour of Aotearoa was facilitated by NZ Māori Tourism with a kaupapa that can perhaps be distilled down to one word: kaitiakitanga.

The delegation was hosted by iwi at important maunga throughout Aotearoa. Ngāi Tahu hosted the whānau during their time in Te Waipounamu, which saw them travel from Tuahiwi to Arowhenua, before making their way to Aoraki.

Te Rūnanga o Ngāi Tahu Kaiwhakahaere Lisa Tumahai first saw Norbu speak at the 2018 World Indigenous Tourism Summit in Waitangi, and was struck by how much his perspectives and insights resonated.

“They have faced the same challenges that we are facing and have practicable solutions to the issues that come with growth. Hosting them at Aoraki, a place of immense significance to our iwi, is an honour.”

Norbu is Vice President of the American Himalayan Foundation, a California-based not-for-profit organisation that supports education, healthcare, and cultural and environmental preservation in the Himalayas. Norbu has long worked to encourage tourism while mitigating the risks of what he refers to as “the business of Everest”.

Dhamey Tenzing Norgay is also experienced in adventure tourism and its effects. His company, The Noble Traveller, operates out of Bhutan, one of the world’s smallest countries. Bhutan has a strong focus on what local people refer to as “Gross National Happiness” rather than Gross Domestic Product, with a “value over volume” approach to their tourism.

The name Tenzing is one of mana to many New Zealanders. Norbu and Dhamey are the sons of Tenzing Norgay Sherpa, the famed mountaineer who, along with Sir Edmund Hillary, completed the first confirmed successful summit of Mount Everest in 1953.

In Western vernacular, the term “Sherpa” has become synonymous with climbing and guiding; but it refers to an entire ethnic group, who are native to the mountains of Nepal. Sherpa people also populate regions throughout the Himalayas including Bhutan, India, China, and Tibet. 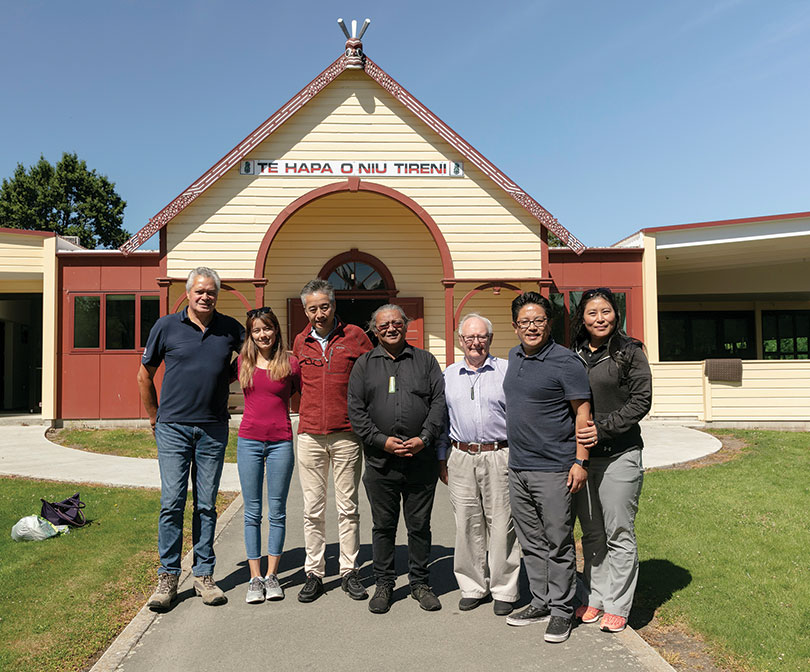 The legacy of their father clearly looms large for the brothers. While some of their siblings have climbed Everest, or Cholongma as it is known in Tibetan, neither brother followed in their father’s mountaineering footsteps. Norbu in particular has sought to conquer a challenge of a different kind – protecting the mountain, and the Sherpa people who inhabit the region, from the adverse effects of increasing tourism.

These days climbing is a far cry from the path forged by Tenzing and Hillary in the 1950s. Norbu suggests that ego, more than anything, is the primary motivation for the modern mountaineer’s desire to conquer Everest.

“We need the tourism, we need the business, we need to grow our people, to get them educated and employed. This is one avenue for it … but at what cost? That’s what we’re trying to do now. We’re trying to find that balance.”
Te Wera King – Upoko Rūnanga

“What motivates people, I think, is important. It’s money that motivates people to go climb Everest; it’s not in the long-term interest of anybody. Westerners are driven by how tough they are, how far they can go, how close to death they can get … for us [Sherpas] it is a spiritual journey.”

At both the North and South Base Camps, climbers can expect functioning Wi-Fi and a menu including pizza, pasta, tea and coffee, bacon and eggs, and even sushi. While a cooked breakfast in your tent with a mountain view may sound novel, the luxury comes with a higher price tag than the cost of entry alone. All food and equipment must be transported up the mountain and prepared by somebody. Enter the Sherpas.

Since the first attempts on the summit in 1922, 290 people have died on Everest. Roughly a third of those deaths are Sherpas.

It is now estimated that 500–600 people attempt to summit Everest every climbing season. Norbu is quick to highlight to the crowd at Tuahiwi the immense strain that is put on the environment by this influx of climbers. On the screen beside him, he brings up a confronting image of the countless discarded oxygen tanks that litter the summit; perhaps only surpassed in quantity by the estimated 10,000 kilograms of human waste left on the mountain every year. 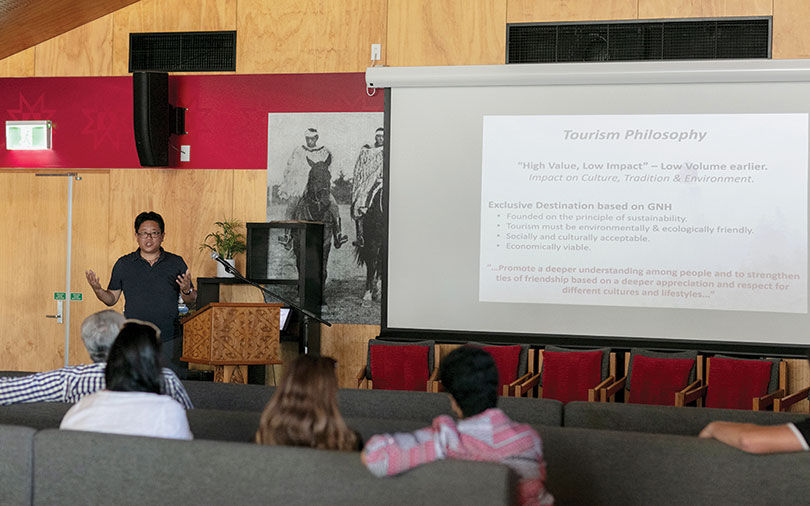 Above: A presentation at Tuahiwi Marae.

From Tuahiwi, the delegation hit the road south to Arowhenua, where Upoko Rūnanga Te Wera King hosted the whānau on the marae, and on to the Te Ana Māori Rock Art site for a tour of the ancient Cave of the Taniwha. Te Wera sees clear parallels between Nepal and Aotearoa when it comes to growing tourism, while still being mindful of the potential damage to the environment. He suggests there are lessons to be learned from the Tenzings’ experiences.

“We need the tourism, we need the business, we need to grow our people, to get them educated and employed. This is one avenue for it … but at what cost? That’s what we’re trying to do now. We’re trying to find that balance.”

After time spent surveying the ancient cave art etched into the rock at Te Ara, we begin the journey on to our final destination. Upoko Rūnanga, Moeraki David Higgins is guiding the delegation during its time at Aoraki. He knows the region and its history well, and is more than happy to tell its story. As we snake our way around the crystalline waters of Pūkaki, we catch a glimpse of the peak of Aoraki in the distance, cloaked in cloud. Not that David is worried.

“Our tupuna has a bit of cloud around the top, but it will clear for us as we get closer.”

And sure enough, as we wind around the roads towards the national park, the sky begins to clear, revealing the majestic crown of Aoraki. As we continue our journey towards the tallest mountain, David tells the love story behind the creation of the Aroarokaehe Valley.

“Maukaatua, the range that stands on the southern boundary of Pūkaki is our ancestor. He had fallen in love and married a beautiful maiden called Aroarokaehe – and she was a stunner! They lived together as man and wife. But there was a jealous challenger by the name of Kirikirikatata, he’s right up there, at the base of Aoraki. He tried to convince her to leave her husband and make her way up the valley to live with him – ‘Leave the old man and come live with me, I’m much more virile.’ Finally, she agreed, and left Maukaatua at the bottom of the valley.

“But Maukaatua had a few tricks up his sleeve, and he turned Aroarokaehe into stone. She now represents the female side of the mountain, she resides in the valley where she gazes upon her lover, Kirikirikatata, on the hill above her.”

David gestures towards the tallest mountain up ahead.

“I guess the old man here, Aoraki, must have watched all this going on…” 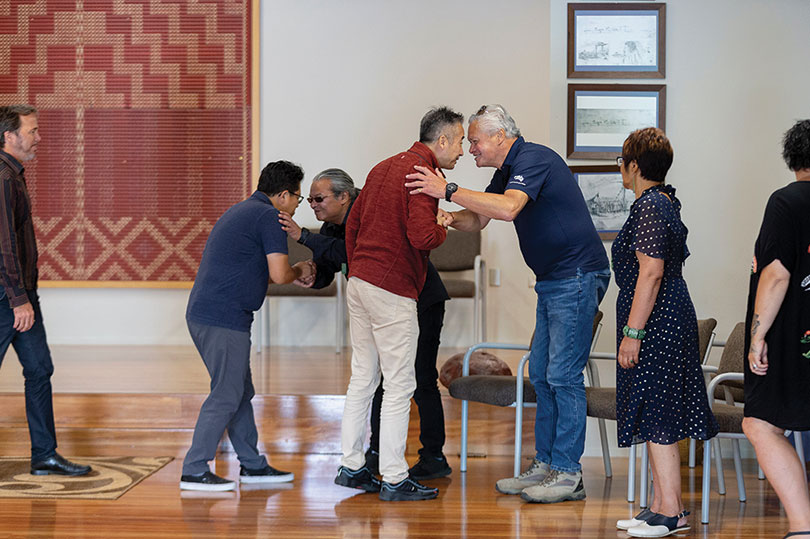 Above: The Tenzing whānau being welcomed to Arowhenua Marae.

We arrive at Aoraki Airfield, where the Tenzing whānau board a Glacier Southern Lakes Helicopter to take them up close and personal with our tallest mountain. During a brief but action-packed flight they are taken all the way around the peaks, and even touch down on Haupapa (Tasman) glacier. They land back at the airfield about half an hour later, buzzing from their experience.

“The mountains and the hills and the valleys, just like in Māori culture, are sacred places. I’m learning from my experience with the Māori people how deep the sense of identity is; how much thought goes into every decision that is made.”
Norbu Tenzing Norgay

I ask Norbu about the significance mountains have for him as a Sherpa, and his respect for tikanga Māori and history is plain to see.

“The mountains and the hills and the valleys, just like in Māori culture, are sacred places. I’m learning from my experience with the Māori people how deep the sense of identity is; how much thought goes into every decision that is made.”

Norbu’s connection to Māori culture makes it clear that his bond with our country goes far deeper than the Hillary/Tenzing legacy, further highlighted by his recitation of a familiar saying.

“I found another beautiful Māori quote that is very appropriate: ‘Seek that which is most precious, if you are to bow, let it be to a lofty mountain.’”