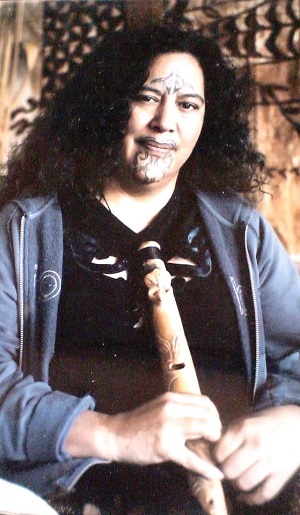 Mahina with one of her taoka pūoro.

Traditional Ngāi Tahu instruments will be showcased during the Te Matatini 2015 pōwhiri in North Hagley Park, Christchurch on 4 March.

Tony Smith, (Ngāi Tahu – Ngāti Irakehu), one of the tutors for a planned taoka pūoro wānaka to be held at Ōtākou Marae from 30 January to 1 February, says Te Matatini gives the opportunity to expose people to the sounds of Ngāi Tahu tīpuna.

“We all know that kapa haka, songs and actions are a big part of Te Ao Māori and there is no doubt that instruments and chants would have been accompaniments, he says.

“Many of the taoka pūoro traditions were lost due to the introduction of missionaries and colonialisation. We want to take this opportunity to showcase Ngāi Tahu instruments and how we’re trying to revive them.”

Whānau are invited to attend two wānaka in the lead up to the Te Matatini performance. Organisers hope whānau will get involved and contribute to the exciting task of creating a piece that acknowledges the elements of Te Waipounamu – one that resonates with Ngāi Tahu whānui.

“This is an opportunity for them to be a part of a process of organizing a huge pōwhiri – it’s a once in a lifetime thing,” says Tony.

Mahina Ina Kaui (Ngāi Tahu – Kati Huirapa ki Puketeraki), will also teach during the wānaka and perform during the pōwhiri. She says the group will need both women and men as the sounds they produce often complement one another.

“Hine Raukatauri is the Māori goddess of the flutes, she is a feminine goddess, so traditionally women would play her instruments,” she says.

A pūtātara that was created by Brian Flintoff.

Mahina encourages all whānau who have an interest in taoka pūoro to attend the wānaka, especially rangatahi.

“They don’t have to be skilled at playing the instruments to be a part of the opening sound piece at Te Matatini. We have certain instruments – like the tumu tumu (a found percussion instrument) – that we can give them to play,” she says.

Without giving too much away, Mahina says the duration of the Te Matatini sound piece could be up to four minutes.

“We’ll be starting off with the pahu – they are made of pounamu and are like gongs. There will be a solitary one, that will start the whole thing off.

“The last part will be the sound of the pūtātara and that will indicate to whānau that it’s time to come on board and do the karanga.

At this weekend’s wānaka, Mahina says whānau will learn about various taoka pūoro and then they will compose and record the music together, so they can take away soundscapes and rehearse in their own time.