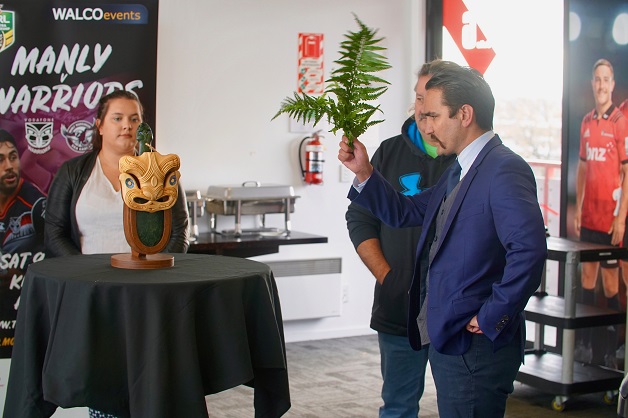 A special taonga, Te Ātanga – the Broadhurst-Shelford Trophy, was unveiled for the Manly Warringah Sea Eagles match against the Vodafone Warriors on June 9 in Christchurch.

The name Te Ātanga (my beautiful one, my adornment) comes from “E rere taku kahu ātangatanga – Soar my beautiful eagle”. The eagle in flight is a wonderful thing to see, a beautiful vision, referring to the way both teams play the game, with speed and skill, that wows the masses.

The trophy is also named after the two Christchurch-born former Manly players, Mark Broadhurst and Adrian Shelford who represented Manly in the 1990s.

The taonga trophy was carved and designed by Ngāi Tahu master carver Fayne Robinson, who also designed the Manly playing jersey for the game. The trophy showcases a mere pounamu encased in a wood carving.

The pounamu in the trophy is in the form of a short, traditional hand held weapon to express the story of two teams in close combat. “The head at the front of the trophy is acting as a guardian on behalf of the Shelford and Broadhurst whānau,” said Fayne. 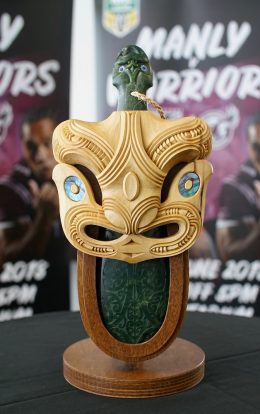 The trophy has a particular significance for Adrian Shelford’s whānau who whakapapa to Ngāi Tahu, the South Island iwi whose tribal takiwā the game is being played in.

Hami Shelford said his family was honoured by the recognition his brother Adrian received through the trophy. He said that the family remembered Adrian, who passed away in 2003, as a man with the determination and commitment to succeed in everything he did.

“He was a man of strength in many ways, physically, morally and spiritually. He was 100% committed to family and everything he inspired to be, on and off the field.”

Mark Broadhurst has been excited about his old club taking the field in his home town, of Christchurch, and having this unique trophy named after him was clearly unexpected.

“I am honoured to be asked along with the late Adrian Shelford and representing Ngai Tahu as ambassadors to the Manly Sea Eagles,” said Broadhurst who played for Manly in in 1981-1982, then had a year at the Illawarra Steelers, before three seasons at Hull KR in England.

“It gave me a chance to play in one of the toughest competitions in the world along with the best Aussie players at the time. “

Lisa Tumahai, Kaiwhakahaere of Te Rūnanga o Ngāi Tahu, said that the trophy and the wider partnership with Manly was a great opportunity to showcase Ngāi Tahu culture and identity and promote health and wellbeing.

“Supporting this game has been an opportunity for Fayne to show his art to the world and promote sport and healthy living to our whānau,” says Lisa.

Manly CEO Lyall Gorman said that his club was deeply touched and honoured by this gift from Ngāi Tahu. “And just like the jersey, it underlines Manly’s partnership and long-term commitment to the Christchurch community,” says Gorman.