My house is full of aunties. Suitcases in the hallway, laughter in the kitchen, too much kai, a barrage of questions. It’s like someone’s turned up the world’s volume.
How are you? What have you been up to? Hungry? Sit down!
Anyway, but he’s married to… yeah, but she’s one of ours, right? Right!
They’ve come all the way from Murihiku. They’re excited.
Must be time for Te Matatini. 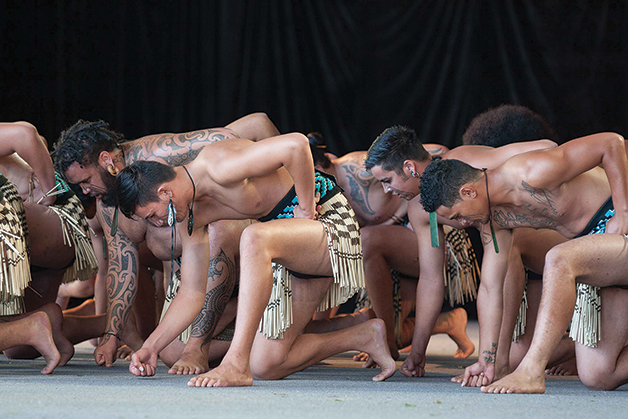 Hagley Park is full of aunties. There’s a huge eddying river of people hugging and kissing, young and old, waving and looking. Grass-covered schoolboys jostle in for a look at the trophies. Everyone photographs everyone else.

I’ll say. Never seen so many hot Māori boys in my life!

The pōwhiri is about to begin. Two great encampments stand before the mānuka palisades, Ngāi Tahu to the east, the motu to the west. The Rātana band lines up. Warriors pad through the crowd to take their place out front, patu pounamu cradled in their arms. One breaks away to greet a kaumātua. They grasp shoulders in a quick fierce hongi, voices quiet. 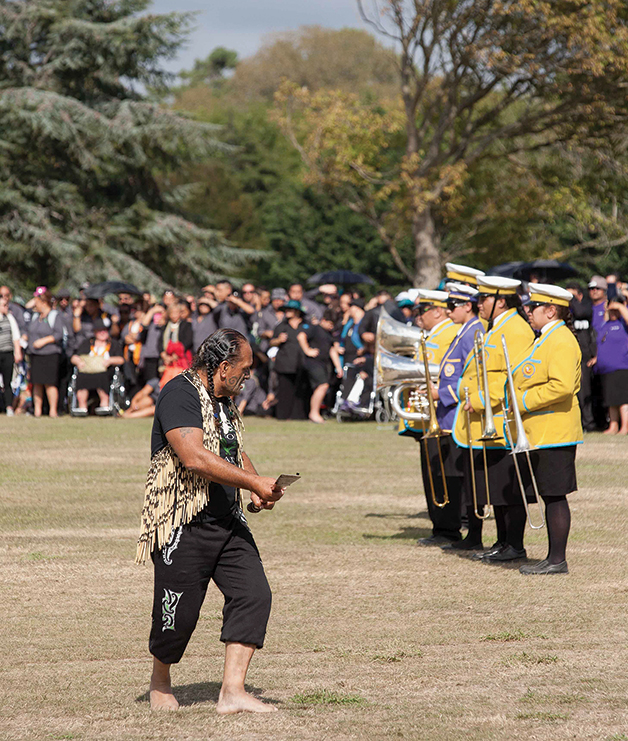 From somewhere, everywhere, the sound of pounamu. A resonant underwater clang echoes from all sides. Clang. It’s a pahū pounamu, a greenstone gong, struck once, twice, three times; then comes the deep fluttering sigh of the porotītī. Eyes up. Ethereal calls fill the paepae. Pūtōrino and pūmotomoto in surround sound. Karanga weka. The puru gourd booming like kākāpō. Then comes ororuarangi, the two-voiced flute, the human world. Conversation dies away. Only yesterday I saw these traditional instruments behind glass in a museum. It’s great to hear them full of life. There’s a blast of tētere, flax trumpets seven-strong, calling the people on. The Rātana marching band starts marching. It begins. 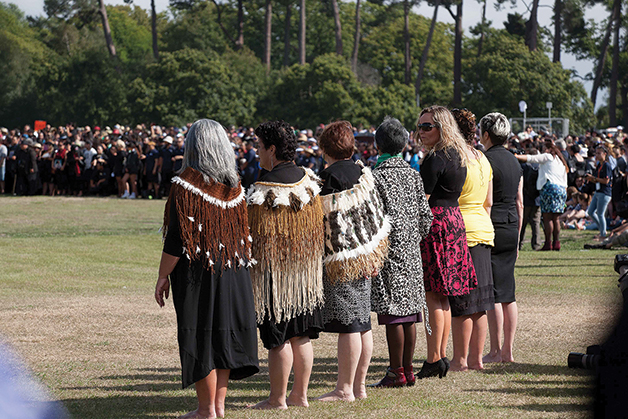 The morning air is full of aunties. Their karanga rise one after the other, calling the thousands onto Ngā Pākihi Whakatekateka o Waitaha: the proud, strutting plains of Waitaha, named for Rākaihautū and Rakihouia’s joyous reunion. The river of teams and their whānau flow past the kaikaranga to pay their respects and receive gifts of pounamu. They’re in tracksuits and piupiu, scarves and korowai, sunglasses and suits. It’s (one of) the biggest gatherings of Māori in the south since Te Matatini (then known as the Polynesian Festival) was here in ‘86. Last time we hosted was before cellphones, laptops, Māori TV, nek minnit. Before the earthquakes. Before the Settlement. There’s tears galore out here. Pride and tears.

Three hundred of the 30,000 faces of Te Matatini surge forward with “Tēnei te Ruru”. There’s warmth and fire in the welcome. The kaupapa of this year’s festival is “He Ngākau Aroha”. Ngākau is the heart. It’s also a token sent to friendly tribes asking for aid in troubled times. He Ngākau Aroha: a loving heart, and gratitide to all these northern iwi who sent help when the city was crushed. 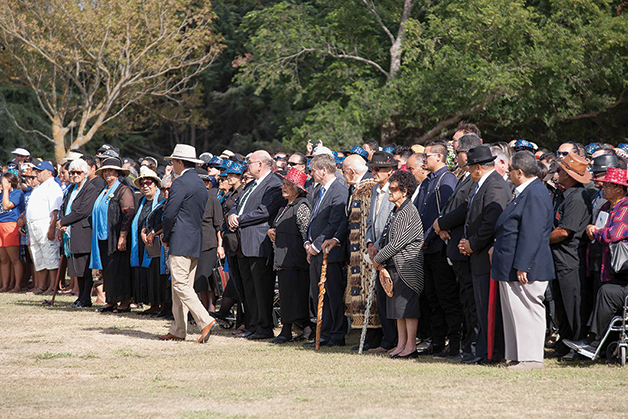 The chairs around me are full of aunties. They fan themselves in the heat or work at their smartphones. Up on the paepae speeches pass back and forth. The first three waiata tautoko from the manuhiri are all old mōteatea chants, the voices and bodies standing and speaking as one. Heads nod in appreciation.

Get that, all 16 verses of “Pinepine te Kura”. First time in my life I’ve heard the full version done.

There’s a cocoon of focused attention around the kaumātua and kuia under their white shade marquees. Over distance and time, concentration spreads and relaxes at the margins of sprawled schoolkids, gossips and catch-ups, breast-feeding and sun-screening. 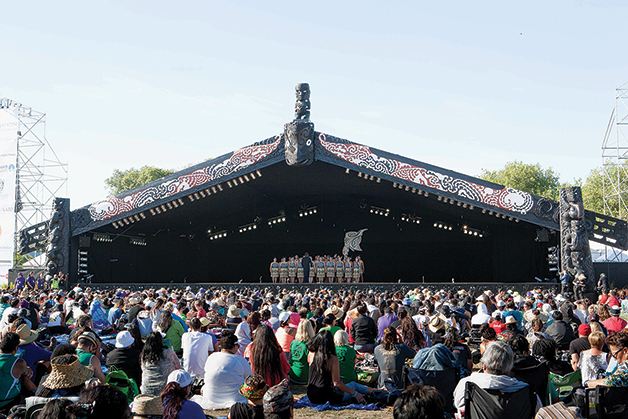 Nice taonga, bro. You look like you’re gonna catch a taniwha with that thing.

It’s hot. A camera drone fizzes overhead. A young performer in piupiu strides through the crowd with his shaved head held high, expression fierce, hand resting on the patu in his belt.
An auntie grabs him and kisses him and points to his wrist. They crack up. He’s forgotten to take off his watch. In the front row, Deputy Prime Minister Bill English blinks in the sunlight. The latest waiata tautoko from the manuhiri begins, and ends.

Oh, that was quick. Next!
How many more? Six?
Nah. One, two, three; three more. Better hurry up or we’ll be all Matatini’d out!

The kai tent is full of Aussies. Three teams of our relations who live in Australia made it into this year’s finals.

Yeah, she’s from Aussie, but she knows all the words. 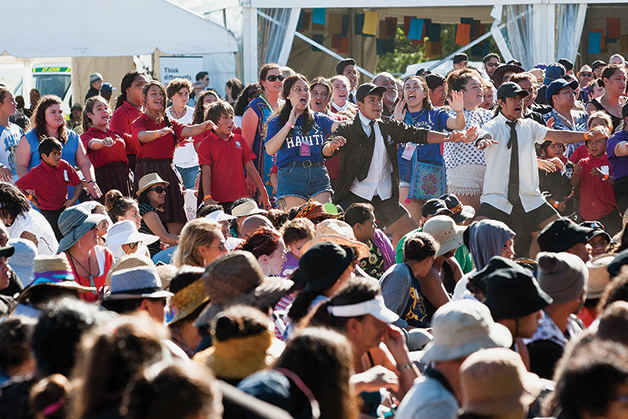 Along with the other kaumātua, their elders are stocking up on kōura, tītī, tuna and kina. Everyone else gets a feed too. It’s the first time they’ve had a hākari at a Te Matatini pōwhiri. Dozens of volunteers hand out thousands of bento boxes full of delicacies from the south. It’s all traditionally harvested, or donated by Ngāi Tahu businesses. Feasting people fill every inch of shade.

Imagine if you got this on Air New Zealand flights! Instead of some pasta and a bread roll, you got tītī and pāua.
Dream on!

I get two trays and sit chatting with North Island visitors while waiting for Dad. He’s nowhere to be found. Sadly it’s not safe to hang onto his kai for too long in the heat. Can’t let it go to waste.

The lawn in front of the stage is full of aunties. It’s Te Ihu, day one of the competition, and they’ve come early to stake out their turf. The ground’s covered with blankets and tarps in a giant patchwork quilt that looks like the Canterbury Plains. They’ve brought water, sunscreen, cushions, and kai, though most have left their cameras at home.

No filming please, or you will be tasered.

The MCs are in good form. They ask how many Te Matatini first-timers are in the crowd. About a third raise their hands.

Ka pai! We’ve just heard that this is officially the most brown people ever in Christchurch.
At least since the opening of McDonald’s.

The third act is local kapa Te Pao a Tahu. Their teal blue costumes gleam like Aoraki’s glacier lakes. When they emerge onto the vast stage they’re greeted by name.

A young conductor in a tailcoat leads their opening chorale. He flourishes his baton. It’s a striking sight, this slight figure in formal black and white against the body of traditional cloaks. After the final waiata there’s warm applause, but at Te Matatini applause doesn’t matter so much. It’s when a good chunk of the crowd rises to its feet to haka that you know they like what they see.

Next is Te Waka Huia from Tāmaki Makarau. A buzz runs through the crowd. They won at the last Te Matatini in Rotorua, and they won in Christchurch in ‘86. You know they’re good, from the flash of red beneath their cloaks when they turn, or the full-body quiver of their haka.
It’s the same with Te Ahikōmau a Hamoterangi, the next Waitaha kapa. The men begin in circle formation facing inwards, kaitātaki tāne in the centre. The pulse is slow, sustained, intense. Piupiu swish and crack. Two policemen stand to my left. One grins with pleasure. The other, plainclothed, watches stone-faced. The judges’ heads dip and write, rise and watch. A guy up the back turns to his wide-eyed kids. 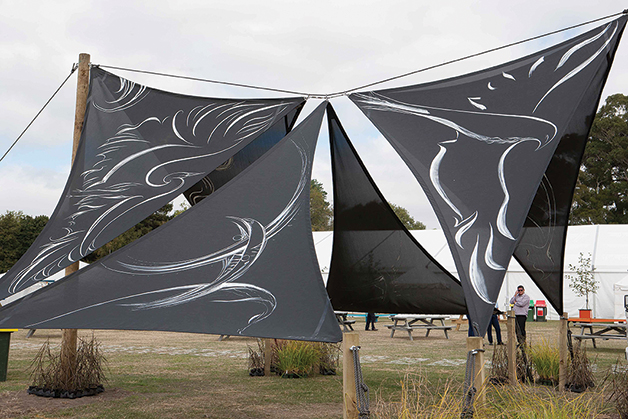 On Saturday, Ngā Manu a Tāne, who won the Waitaha senior kapa haka regional competition, stand with a solid performance that earns them the highest place of the three Waitaha rōpū here.

The kai tent is full of aunties. The Māori Women’s Welfare League are hard at it making chicken baps. There are kai-babs, cuzzy pies, tītī kai, and whitebait sammies. The whitebait queue is massive. The man on the till makes chit-chat to distract bored customers. At his back the kitchen is frantic, except for one auntie standing still as a tōtara. There’s no rushing her. She whisks eggs to perfection with steely concentration.

Most of the food’s healthy. Then there’s fried bread. I resist buying any, but later in the media tent there’s a big crispy, golden-brown pile. I take a slice, then a second. There’s nothing on earth like that sweet, heart-stopping crunch. I try not to think about Elvis Presley, and go back for a third.

I start seeing Te Matatini people everywhere around the streets of Christchurch. At the lights on Bealey Ave, one group’s elegant black and gold scarves catch my eye.

Where are you guys from?
Rotorua! Here for a big kapa haka competition. You should go!

Days two and three roll by. We’re in and out of the venue by day, and watching reruns by night. By now it feels normal to watch kapa haka and hear te reo 24/7. There’s humour, there’s drama, there’s kai. Te Iti Kahurangi use their haka to challenge Māori Television, right down to the actions of switching the TV off.

The sun burns down and the crowds pour in. Rain pours down and the crowds flood in. By the time the judges assemble on stage to announce the finalists the grass has turned to dirt, but no one seems to care. They’re too busy picking winners. Te Waka Huia are up there. Te Whānau a Apanui, Waihīrere, Te Mātārae I Ōrehu… Everyone’s got a favourite kapa, which just happens to be full of their relations. 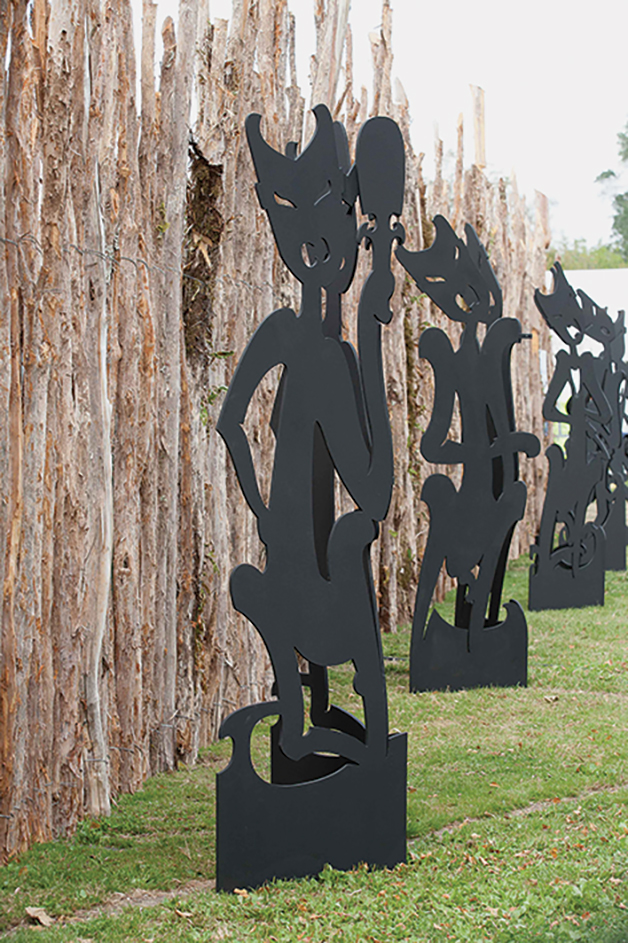 Shush, here we go.
And the finalists are, in no particular order…

Finals day is full of – everyone. The place is rammed.

Not just Māori here, aye? I was in Rotorua and it was just brown folk.
Yeah, good to see so many Pākehā.

I hear Māori, English, French, Cantonese, and German. There are curious toddlers everywhere. A girl of about seven wins the pūkana comp with a hardcore face that makes the crowd holler in delight. Heaps of tourists are told off for photographing the stage.

Can I just take photos of the big screen instead?
No.

Up on stage, everyone’s lifted their game. There’s an intensity to the performances that at times brings tears. For the first time, I pop on headphones and listen to the live translation on Hakarongo Mai. It’s like the world leaps into full-colour HD. The haka we’re watching is not just powerful rhythm and sound. It’s about Te Kooti. 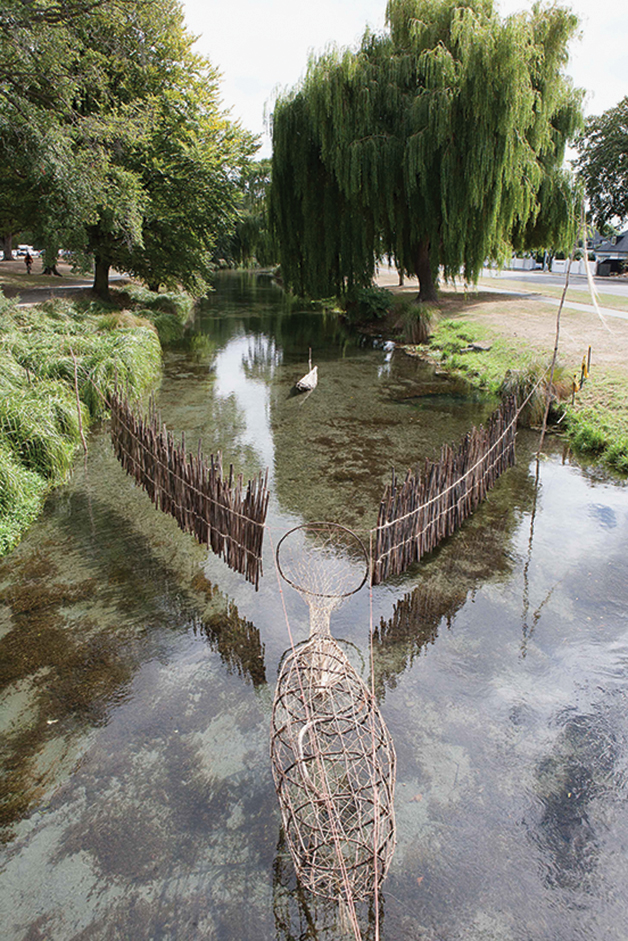 (Where are the monuments to the women and children
Stripped and executed by musket?)

Only it’s not about Te Kooti, it’s a full-body enactment of his life. The deep space of history opens around us.

(Oh you detestable Governor and your drunken soldiers,
Attack…)

Every gesture is charged. Every song speaks to the next. The mōteatea which follows is Te Kooti’s response to the soldiers. Then Ōpōtiki Mai Tawhiti enact the hanging of Mokomoko for the murder of Reverend Völkner – a crime he didn’t commit.

The poi swing gently, like a body from the gallows. Mokomoko was pardoned, but confiscated land never returned. It’s 1865 as if yesterday. Or earlier. Te Mātārae I Ōrehu tell an old tale of love, betrayal, loss, and revenge. There’s a white dolphin, a silver pathway over the ocean, omens of adultery, and chants to Tangaroa to send a tidal wave to drown an unfaithful lover. The wāhine reach forward, stabbing the air with their fingers:

Te Mātārae I Ōrehu from Te Arawa, Rotorua and Ōpōtiki Mai Tawhiti from the Eastern Bay
of Plenty – were joint runners-up.

Of the 45 groups that performed at the festival, nine teams made it to the finals.