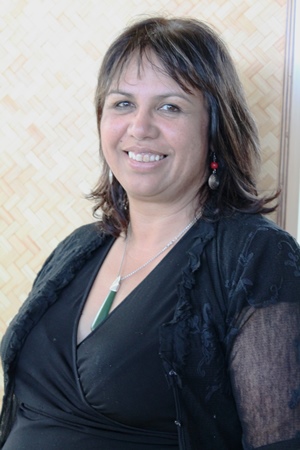 It was a dream come true for Rangimarie Parata Takurua, when she heard Waitaha had been announced as the hosts for Te Matatini 2015.

“I was crying – I felt like I had won Te Matatini,” she says.

The theme of Te Matatini 2015 will be He Ngākau Aroha – A Loving Heart. Rangimarie says as hosts for this year’s festival, Ngāi Tahu whānau will have the opportunity to manaaki those who cared for them in their time of need during and after the Christchurch earthquakes.

Rangimarie (Ngāi Tahu, Waitaha, Ngāti Māmoe, Ngāti Kahungunu), who is the project manager for hosting Te Matatini 2015 says that after the official pōwhiri they will serve food to around 5-7,000 manuhiri. This is something that has never been attempted at a Te Matatini festival before but Rangimarie says that Ngāi Tahu have a distinctively southern way of hosting.

“We want our cousins from the north to know that they are in the south and we want them to enjoy the things that we often take for granted. We know how to manaaki people and we have kept our food gathering practices alive,” she says.

The last time Christchurch hosted the festival was in 1986 when it was formerly known as the Aotearoa Traditional Māori Performing Arts Festival. This festival is remembered fondly by Rangimarie’s whānau as her late father, Pura Parata was the chairperson.

“It’s our turn – there’s an obligation there. My dad was the chair at the 1986 festival, so there is a legacy,” she says.

Rangimarie has near to 30 years of board experience, having worked on various boards around New Zealand. She worked in the Ngāi Tahu Māori Trust Board around time of the Settlement and she is currently the deputy chairperson for the Waitaha Cultural Council.

She says a large part of her Te Matatini role has been securing funding to host the festival, along with overseeing hosting responsibilities and identifying ideas to ensure it is a stress-free experience for all festival-goers.

Although her role has been hectic at times, she says she does it for her love of kapa haka. She grew up with kapa haka and says her parents met while performing together in the same group.

“I’ve always been involved in kapa haka and I’m really grateful for that – I was probably doing it in the womb.”

Come Te Matatini, Rangimarie will continue to work as project manager and she will perform with her Waitaha kapa haka group, Te Ahikōmau a Hamo-te-Rangi. Around 21-years-ago, Rangimarie was one of the founding members of the original group, Te Ahikaaroa. She says there are around 100 members in the group and of them there are several generations of different whānau.

“There is a distinct thing happening in our rows; we are watching our babies coming through and that’s exciting,” she says.

Her husband, Tauira Takurua has been with the two groups since their inception. Rangimarie says he comes from a long line of composers and he has composed many of the waiata that Te Ahikōmau a Hamo te Rangi sing.

Over the years, Rangimarie has also used kapa haka as a vehicle for education. In 2002, after seeing an increase in members having their own families, members of Te Ahikaaroa opened Nōku Te Ao, the first total immersion early childhood centre in Christchurch. More recently she has been working hard to lead the establishment of a new special character school in Christchurch, Te Pā o Rākaihautū, which is a 21st century pā wānanga catering for the whole whānau, from early childhood to tertiary, on one site. This is due to open just before Te Matatini and will host one of the visiting kapa haka groups from Perth.

It’s going to be a busy start of the year for Rangimarie but she says hosting this year’s Te Matatini festival is a once in a lifetime opportunity. She hopes that by bringing the competition down here, it will help to normalise kapa haka in Christchurch and encourage both Māori and non-Māori to get involved.

“It’s going to bring a big noise. It’s a very strategic move since it’s at Hagley Park, smack-bang in the heart of Christchurch – you can’t ignore it.”