In September, New Zealand Para athlete Holly Robinson brought glory to the country and ticked a goal off her personal bucket list when she won gold in the women’s F46 javelin throw at the Tokyo 2020 Paralympic Games. To cap it off, she was later named the inaugural winner of The Visa Award, a global fan vote that celebrates moments of friendship, inclusion, acceptance and courage. Kaituhi Anna Brankin catches up with Holly to reflect on her successful career and talk about her plans for the future. 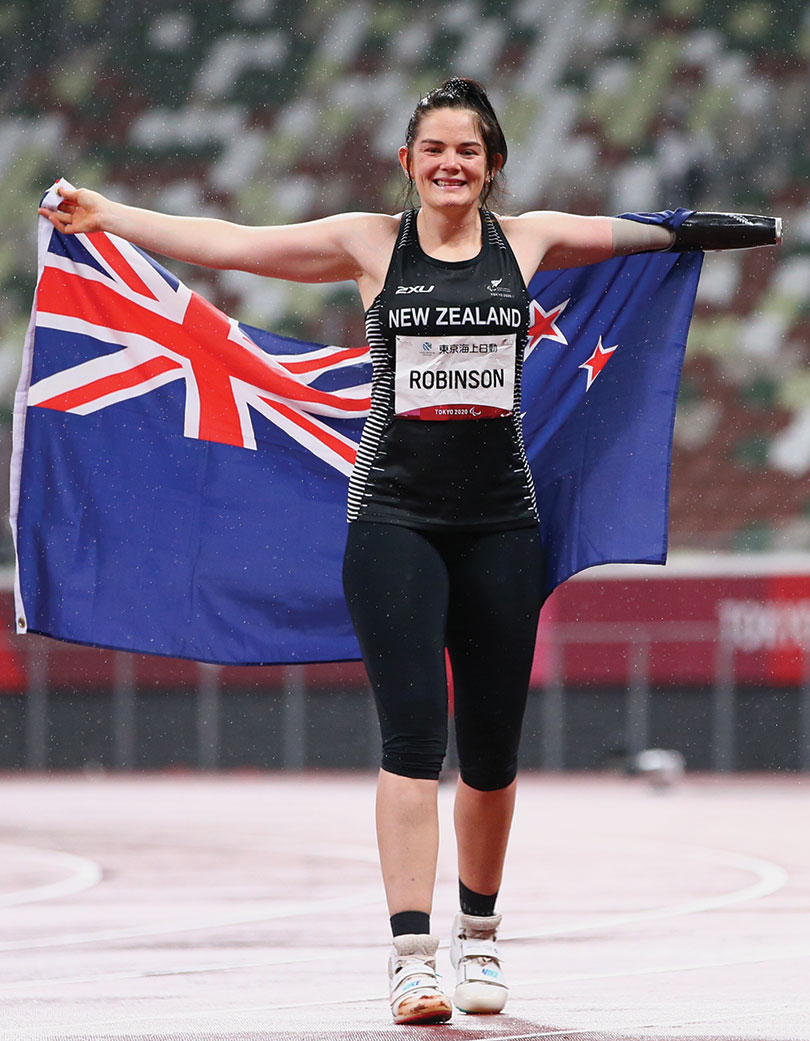 Above: Holly celebrating in the moments after her gold medal win. She also won The Visa Award for a moment of gratitude that took place just after this photo was taken, when she took the time to approach the Paralympic officials and thank them for their work.

For 26-year-old Holly Robinson (Ngāi Tahu – Ōraka Aparima), her gold medal win at the Tokyo 2020 Paralympic Games was a bittersweet moment. After being postponed for a year due to the pandemic, the competition went ahead in September with rules to prevent the risk of Covid-19 spreading. This meant there were no spectators, family, friends and many support crews were unable to attend, and athletes were required to travel home after their event instead of staying to support teammates and join the
closing ceremony.

“It’s just another way that Covid has taught us to be adaptable and figure out how to make it work under the circumstances, but it was tough and it was very different,” Holly says. Having attended the London 2012 and Rio 2016 Paralympics – serving as New Zealand’s flagbearer and winning silver at the latter – she is something of a seasoned campaigner and had become accustomed to the support of fellow athletes and the excitement of the crowd. “One of the things I struggled with the most was that my teammates were leaving before I’d even competed.”

When the day finally dawned, rain made the competition more difficult than Holly had expected. “A lot of people don’t realise that javelin is very weather dependent and anything can happen on the day, no matter how you’ve been throwing in training,” she says.

“Some days you’re on and it just clicks, and sometimes it just doesn’t.”

Unfortunately, things didn’t quite click for Holly in the first few rounds. Her first throw came in at 37.46m, well below her personal best of 45.73m. She improved over the next rounds, heading into the sixth and final round in third place with a throw of 38.75m.

Drawing on an inner resolve honed over years of competitive sport, Holly pulled it together to throw 40.99m in the final round and secure the long-awaited gold medal – and to find herself setting another
goal to do it all over again, on her own terms, at the Paris 2024 Paralympic Games.

“It was a mix of emotions for me. On paper, I won the gold medal, but in reality it was a competition that didn’t go to plan,” says Holly. “I’m really proud that I managed to stick in the competition and win the gold off my last throw, but I know there are still big throws in there and I want to let them out. That’s my goal for the future: to show those big distances on the world stage.”

This goal comes as no surprise to those who are familiar with the determination and focus that has driven Holly’s career. A congenital limb reduction (her left arm ends below the elbow) means she has the choice of entering national competitions as a Para athlete or as an able-bodied athlete. Given there are very few Para athletes that throw javelin in New Zealand, there are a lot of easy medals to be collected in this category – but more often than not, you’ll find Holly competing alongside able-bodied athletes in the senior women’s category. 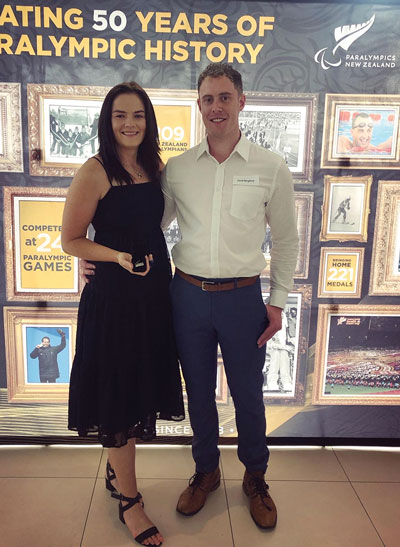 Above: Holly and her partner Geoffrey Wingfield at an event hosted by The Celebration Project acknowledging over 50 years of Paralympic history.

“There’s no point throwing just for the sake of throwing, and to win a medal just because there’s no-one else there,” says Holly. “I have to find my competition elsewhere, and that senior women’s category gives me the challenge that I’m always looking for.”

Rising to that challenge, Holly placed second earlier this year at the New Zealand Track and Field Championships, becoming the first Para athlete to win a medal in an open competition.

Holly’s journey towards the Paralympic Games began during her childhood in Hokitika, when she realised her love for sport and the satisfaction she drew from working hard to improve her abilities.

“I’ve always had a big passion for training and competing,” she says.
“I actually played a lot of sports, both team and individual, but eventually I realised that athletics was an avenue that might take me somewhere.”

By the time Holly reached her mid-teens it was clear that her natural abilities, as well as her incredible work ethic and drive, would indeed take her somewhere. She made the decision to specialise in javelin, preparing for the fact that this was the only field event she would be eligible to compete in at the Paralympic Games or World Athletics Championships.

In 2011, Holly’s potential as a Para athlete was recognised when she was offered a scholarship to relocate from the remote Te Tai Poutini to a larger centre where she would have access to the coaching and facilities she would need. She made the decision to move to Dunedin to begin working with well-known Para athletics coach Raylene Bates – and, she says, “the rest is history.”

“There are lots of people who got me to where I am today. My grandmother was one of them: she got me into athletics, got me my first coach and came to my junior events here and overseas. My first coach, Danny Spark, and current coach Raylene Bates, they’re both incredible, incredible people and I’m very lucky to have had their support and knowledge over the years.”
Holly Robinson

“There are lots of people who got me to where I am today,” Holly says. “My grandmother was one of them: she got me into athletics, got me my first coach and came to my junior events here and overseas. My first coach, Danny Spark, and current coach Raylene Bates, they’re both incredible, incredible people and I’m very lucky to have had their support and knowledge over the years.”

Pursuing a career in sport is challenging, on body and mind, and Holly says she is very aware of the importance of having good people around.

“I have a full team around me here in Dunedin – my coach, a strength and conditioning coach, physio, massage therapist and nutritionist,” she says. “You might see me out there competing and throwing these distances, but actually there’s a whole team behind me that got me there, and that includes my family and my friends. 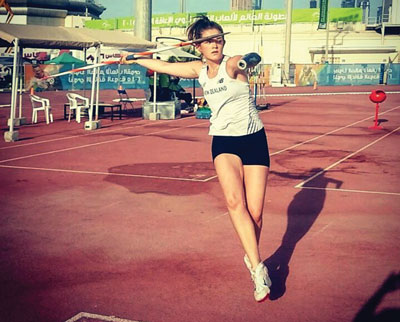 Above: A young Holly already representing New Zealand at the IPC World Track and Field Championships 2015 in Doha.

Although there is a natural emphasis on maintaining Holly’s form and physical fitness – she trains for at least two hours a day, with stretching and nutrition a core component of her routine – her team has made it clear her mental health and wellbeing is their priority.

This is consistent with a growing understanding of the toll professional sport can have, between the highs and lows of competitions and the impact of constant training – issues that have been highlighted through events like the decision of US gymnast Simone Biles to withdraw from several events at the Tokyo 2020 Olympics, and the tragic death of New Zealand cyclist Olivia Podmore.

“I have experienced a few mental health issues and dealt with my own demons where my sport is concerned,” Holly says. “At the end of 2019 I was really struggling. Things weren’t going well, my attitude was bad and my javelin was not good. My coach and a few other people sat me down and asked if I was OK, and everything just came out then –I was not OK.”

At the time Holly was in the midst of training for the Tokyo 2020 Paralympic Games, which had not yet been postponed. Her training regime was taking its toll on her body and her mind and she described herself as being burnt out. “That’s quite a common thing for athletes to say – burnt out. I was overworked, my body was sore all the time, and I just couldn’t handle it.”

She credits her team for recognising something was amiss and addressing it. They worked together to find ways for her to rest and recover, and regain her enthusiasm. “I was very lucky to have those people around me. I think it would be very challenging to come out of that dark pit without them. It’s quite a vulnerable thing for us to admit when we’re hurting, when things aren’t right. But now I know that it will get better if I speak up.” 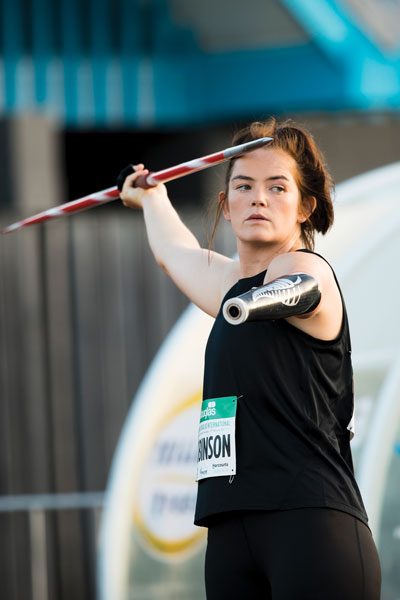 Above: Holly’s laser sharp focus in the moments before a throw at the Sir Graeme Douglas International 2021, where she placed fourth in the able-bodied senior women’s category.

This new awareness served Holly well when she recently returned to training two months after her gold medal win.

“Getting back into it was pretty tough on my body, and also mentally. Coming home from a major championship, you go from this major high, straight into MIQ which was quite a big low, and then come out into this big high of seeing everyone again,” she says. “And then your life just goes back to normal. It was a whole roller-coaster coming away from the games. Tokyo was something that I had focused on for so long, and now I’ve had to reset. That took me a while to get my head around, but we’ve got there now and we’re on the road to where we want to go.”

With her eyes set firmly on the horizon, Holly is looking forward to the next few seasons as she builds towards the Paris Paralympics. The recent news that shotput has been added to the field events has given her another challenge to work towards. She now hopes to enter javelin and shotput. “I’ve been around for a wee while now, nearly 12 years, and sometimes that new and exciting challenge is just what you need.”

Meanwhile, Holly will continue her work as a teacher aide at the Sara Cohen School for students with diverse needs, and finding waysto work with aspiring athletes within her club and wider community.

“I’ve always thought that sport is a great way to show people that you can do whatever you want. I have a huge passion for helping others and encouraging them on their sporting journey.”

This passion led Holly to complete a Bachelor in Applied Science in Physical Activity, Health and Wellness, a qualification that she intends to use to help others succeed in their chosen sport.

“You just need one person to say, ‘hey, maybe you should try this’ or ‘wow, that was really awesome,’ and that may be the thing that encourages someone to give it a shot,” Holly says. “That happened for me – I had people encouraging me all the way, and it was their belief in me that ignited my own dream of becoming a Paralympian.”