The WORD Christchurch Writers & Readers Festival is a biennial literary event that brings together writers and performers, local and international, in a celebration of storytellers and telling.
Kaituhi Nic Low attended this year’s festival in late August. 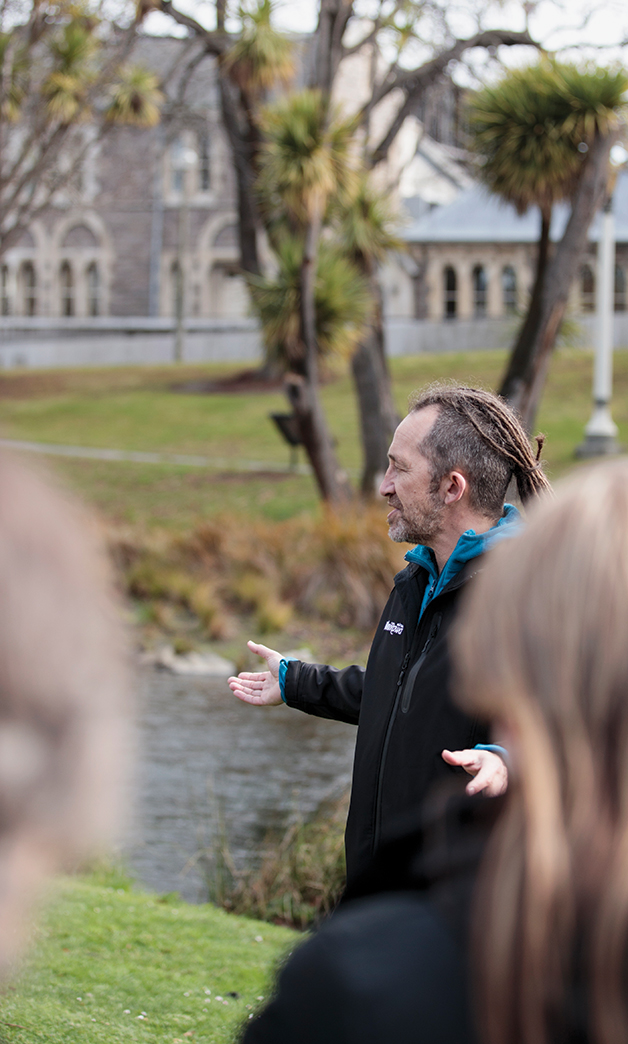 It’s a great day for a walk. Ngāi Tahu storyteller Joseph Hullen (Ngāi Tahu – Ngāi Tūāhuriri) leads off through the sliding glass doors of the new arts venue The Piano, out into pelting Ōtautahi rain. The audience follows, jacking open their umbrellas one after another. Clack, clack, clack. The warm buzz of the WORD Christchurch Festival fades. They head west into teeming, empty streets.

“We’re starting here because this was one of the first places where Māori and Pākehā met regularly in Christchurch,” Joseph says on the brick forecourt of Victoria Square. “This used to be known as Market Square, and it’s where Ngāi Tūāhuriri came to sell various goods to the early settlers. But long before that, from up there by the hospital, all the way down along both sides of the river, this was Puari Pā. We know because of our oral traditions, and the fact that burials and various artefacts were found in this area.”

The audience huddles round in a curious circle. Rain and history soaks into their skin. Joseph’s “Oratory on the Ōtākaro” is a tour of the early life of Ngāi Tahu in central Christchurch, and a central part of WORD 2016. The festival brings together more than a hundred writers, storytellers, and performers for readings, talks, debates and walks. Ngāi Tahu had previously collaborated on the festival, but this time the partnership expanded, beginning with a pōwhiri hosted by Ngāi Tūāhuriri at Tuahiwi.

“This year there was more kōrero before the festival,” says the festival’s Executive Director, Marianne Hargreaves. “That led to a mutual collaboration which we hope to build on for future years.”

“The feedback from the international writers after their visit to Tuahiwi Marae made it clear that it was a fantastic experience for them,” adds Programme Director Rachael King. “We are so appreciative of the incredible hospitality shown to our writers by Ngāi Tahu.”

The festival is one of the success stories of the recovering city. And an ongoing part of the city’s recovery is the Ōtākaro riverfront redevelopment, in which Ngāi Tahu is playing a key role. It makes sense, then, that Ngāi Tahu are also part of the city’s storytelling festival, telling tales of the river and its banks.

“This area was used because it’s situated on higher ground,” Joseph says. “There was a flood channel of the Waimakariri River that came out through here. When you got a big nor’-west weather system, the Waimakariri flooded lower-lying ground.” He looks up at the clouds and grins. “Kind of like today.” 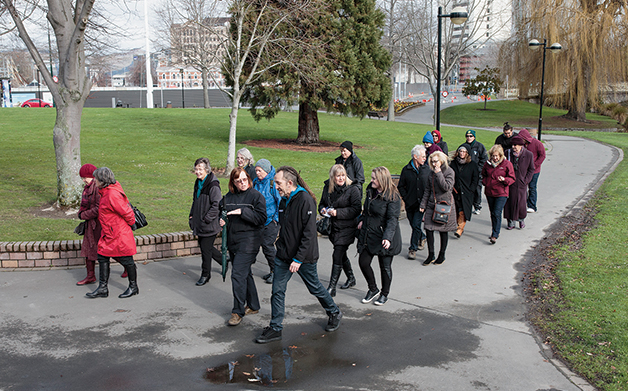 Above: Joseph Hullen leads the WORD walking tour ‘Oratory on the Ōtākaro’.

The group splashes through puddles to stand opposite the law courts. Joseph points to a stand of tī kōuka trees across the river.

“See those?” he says. “In the old days, large groups of tī kōuka could be likened to a flashing neon sign saying MOTEL, because of the food, fibres and shelter they offered. Have you ever run over the leaves of a tī kōuka with your lawnmower, and had to stop and fish them out?”

The locals in the crowd laugh in recognition.

“Well, don’t throw them away. Wrap them up in bundles of ten and use them to light your fire. They burn really hot – perfect for lighting a hāngi.”

Joseph runs through the other uses of tī kōuka: chewing on the stalks, roasting the stringy white pith to make kāuru, even roasting the tap root, though you could only do that once because it killed the tree. He tells people that stands of tī kōuka were also markers for urupā, and aids to navigation. “Whenever I see an old one out in the countryside I think, ‘Hello, what used to be here?’”

It told people that there was a settlement here. The audience blinks in the rain and nods, and you can see the meaning of the trees across the river shifting. Tī kōuka aren’t just decoration. And walking isn’t just walking – it’s storytelling as well.

It’s a great day for a story. The gala event at the WORD Festival is called The Stars Are On Fire, at the beautifully renovated Isaac Theatre Royal on Friday night. The evening presents a highlights package from the programme, and representing Ngāi Tahu is
Tā Tipene O’Regan. He opens the show, coming on stage to bold applause with hei matau and scarf around his neck, and tokotoko in hand. He holds the crowd with the Ngāi Tahu tale of creation, from long darkness to the world of light, to Mākū, to Rakinui and Pokoharuatepō, to Aoraki and his brothers turning to stone, and then Tūterakiwhānoa, Marokura, and Kahukura who made the wrecked Waka o Aoraki habitable for us humans. With a hint of a smile, Tā Tipene tells how this southern land was where Māui stood when he fished up the North Island, thus giving the tribes up there somewhere to stand. Creation tales aren’t just story-telling – they’re where everything begins, and a playful way of asserting mana over our cousins up north. 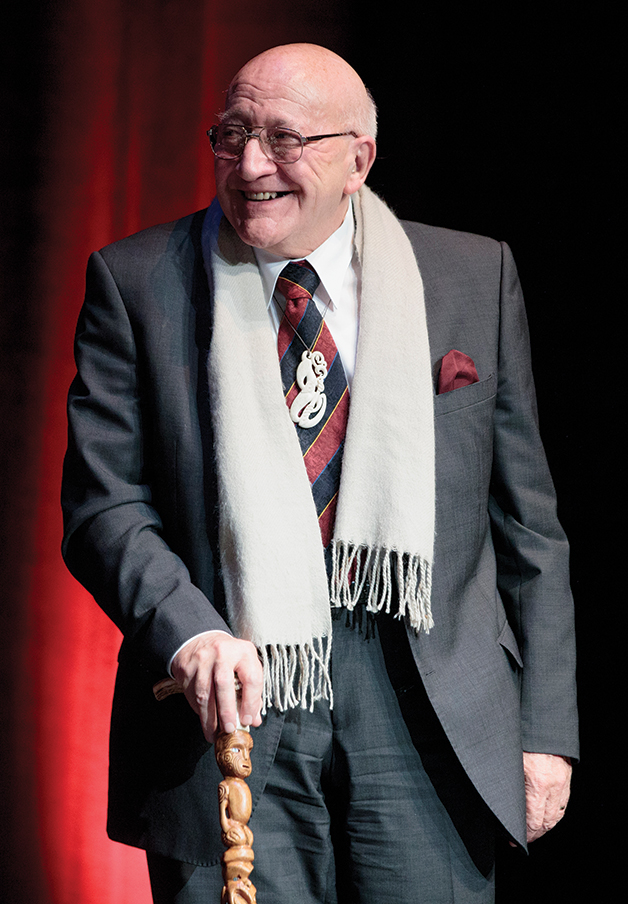 Sitting facing them are special guests including Ali Cobby Eckerman, a Yankunytjatjara/Kokatha poet and memoirist from Adelaide and the central desert in Australia. Next to her is Elissa Washuta, also a writer of memoirs, of the Cowlitz and Cascade People from Washington State. On the end is Ivan E. Coyote, who is Irish and Roma, and a world-renowned storyteller from the Yukon in the Canadian far north.

Ivan, who identifies as neither “he” nor “she” but “they”, stands to share a story of their grandmother’s death. They begin by telling us about all the different people who were there at the bedside, and how they were related to one another.

“Most audiences wonder why I’d list everyone,” Ivan says, “but I was told I wouldn’t need to explain why it’s important to Māori people!”

The hours fly by with sharing different ways of writing and getting published, and what it means to be an indigenous writer today. Hana guides the discussion, and talks about her mahi to revitalise the Kāi Tahu dialect. When she finished her studies she and her friend and long-time collaborator Charisma Rangipunga were challenged by their mentors to do something new with the language.

“They told us it has to evolve if it’s going to survive. ‘Don’t just sing the old waiata’, they said, ‘write new ones. Don’t just recite the old whakataukī, write new whakataukī’.” 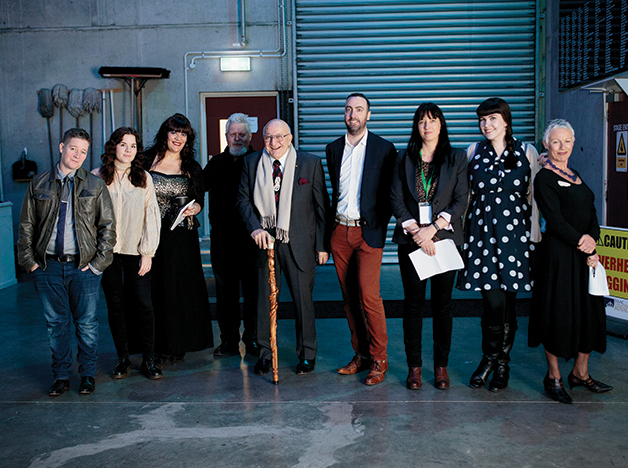 When the workshop wraps up and everyone heads out for kai, we’re thinking about how to write new stories. Storytelling isn’t just about retelling the past, it’s about envisaging the future too.

It’s a great day for thinking about the future of Christchurch. At the WORD Festival there are sessions on climate change, on the future of the media, on how people want the city to look once the rebuild is done. Joseph Hullen and the walkers on the Oratory on the Ōtākaro tour stand in Tākaro ā Poi, Margaret Mahy Family Playground, around a beautifully patterned Whāriki Manaaki, a stone weaving pattern paved into the ground. The creation of Morehu Flutey-Henare and Reihana Parata from Ngāi Tūāhuriri, it’s part of the Ngāi Tahu contribution to the Ōtākaro river-front park. When the project is finished there will be 13 of these patterns gracing different sites, each representing an aspect of the Ngāi Tahu story in the city.

“My favourite is the one beside the Bridge of Remembrance,” Joseph says. “Nowhere on that bridge is there any reference to Ngāi Tahu soldiers. So the weaving pattern is a way of reminding us of those soldiers who fought and died for the country.”

Another change to the future river will be to bring it closer to a natural state. The channel has been variously widened and narrowed to create deep pools, shallows, and rapids, forming different habitats for mahinga kai and other species: the lifeblood of the local ecosystem and the kai of our tīpuna. Joseph points down river, “Near the Kilmore Street fire station was another pā,” he says. “This was the pā of Tautahi, where the city gets its Māori name, Ōtautahi. We think he was buried on the other side of the river: the skeleton of a tall adult male was uncovered during the digging the foundation for the St Luke’s vicarage on Kilmore Street.”

St Luke’s is long gone. By now the crowd have been out in the rain for a while, and are starting to look more than a little damp. They head back to The Piano for tea and scones and to continue the conversation. As the audience files inside they fold their umbrellas one after another, clack, clack, clack. The grey day fades and the buzz of the festival takes over again. Written, spoken, or performed, stories aren’t just entertainment on a rainy day – they’re the lifeblood of a city as well.