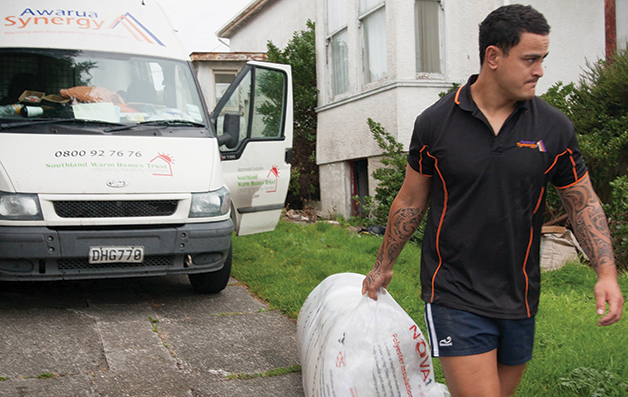 It seems there is no one single answer. Awarua Synergy grew out of the Bluff Healthy Homes project run by Awarua Research and Development, which is a subsidiary of Te Rūnanga o Awarua Charitable Trust. The project was launched at Te Rau Aroha Marae in 2005.

“The Bluff Healthy Homes Project proved to be so successful that we were encouraged to offer some of its best products, services, and ideas to the great people of Southland with the Southland Warm Homes Trust, and that’s how Awarua Synergy was born”, says Sumaria (Ngāi Tahu, Te Āti Awa, Ngā Puhi).

Awarua Synergy is owned by the Awarua Rūnanga and is a thriving example of what is possible with a rūnanga-owned business.

“It makes a difference,” says Sumaria. “I think the staff understand we are owned by the rūnanga, so there is a bit more pride.”

But back to that question again. When Awarua Synergy carries out projects like installing a wind turbine at Te Rau Aroha Marae as part of a long-term plan to increase the energy efficiency of the marae, everyone knows where it originated. But out there in Southland, the distinction is not made. Eighty per cent of Awarua Synergy’s staff is Māori, and that can sometimes cause confusion in the minds of its customers.

“I’ve never had Māoris in the house before,” was the comment from one customer reported by Sumaria. Actually that sort of comment occurs often. And that sort of casual racism exists in the communities Awarua Synergy services as it seeks to broaden its customer base.

How do they deal with it? By offering everyone the same professional service and otherwise ignoring it. What other option is there?

“I don’t think people even know it is racism,” says Sumaria. “It’s just that they don’t know otherwise. They are usually saying it in a nice way.”

The company began by insulating homes, and that kaupapa is still important. The Bluff Healthy Homes Project has celebrated 10-years of successfully offering protection against the cold winter climate, insulating more than half the homes in Bluff and offering advice on energy efficiency at home.

“The Bluff Healthy Homes Project proved to be so successful that we were encouraged to offer some of its best products, services, and ideas to the great people of Southland with the Southland Warm Homes Trust, and that’s how Awarua Synergy was born.”
Sumaria Beaton (Ngāi Tahu, Te Āti Awa, Ngā Puhi)

Awarua Synergy has now brought better insulation and energy saving to more than 6000 home owners and tenants in Southland. That kaupapa instils pride in its employees, says Sumaria, and has a massive impact on the community.

“Insulating homes is holistic, although I don’t like that word. But by insulating homes we create multiple outcomes for families. There is a warmer, dryer atmosphere in a house, people get sick less often, they are able to work more often… it has been estimated that every $1 spent on insulation generates $5 return on investment for the community through better living conditions and quality of life.”

But home insulation relies on subsidies, often from central government, and Awarua Synergy works hard on offering alternative solutions and revenue streams. The marae energy efficiency plan at Te Rau Aroha Marae, for example, includes a small-scale turbine, solar PV system, insulation, replacing lighting with LEDs, and replacing old fan heaters with heat pumps. The marae gets around 10,000 visitors a year, and every little bit will reduce its energy bill.

The same kaupapa extends into domestic homes, with the company constantly looking for innovative energy efficiency solutions. Plenty of homes still need insulation though, says Sumaria, but government policies change and subsidies change. At present, the government operates a scheme offering landlords a subsidy to ensure rental properties are insulated. Sometimes it’s not an easy business to be in.

As a rūnanga business, Awarua Synergy often feels more like a family, says Sumaria, with the good and bad that brings. At present there are 16 staff, mainly from Bluff, and the culture reflects the community.

It’s a different atmosphere, with family values and Bluff banter, says Sumaria. The company also ensures its staff get training. She takes particular pride in having several former freezing workers on staff who have learned to install installation and are knowledgeable about solar power and energy efficiency.

The Awarua Synergy team recently completed a lean management training programme run by Venture Southland. Businesses who have completed the programme report a 30 per cent productivity increase on average. Lean management is a Japanese initiative which focuses on areas where more efficiency can be achieved.

“We have a sense of pride in the company which stems from being owned by the rūnanga,” says Sumaria. “In turn, that creates high expectations from partners and the community which the company has to live up to.”

Sumaria comes from a long line of Bluffies, with four generations currently living in the town. Business is in the blood, she says. Her grandmother, mother, and aunt ran the local bakery, and various family members have run their own business.

She left high school in the fifth form and was sent away to live with an aunt in Australia. She didn’t plan to return and stay in Bluff, but somehow the town and its people have a real hold on her.