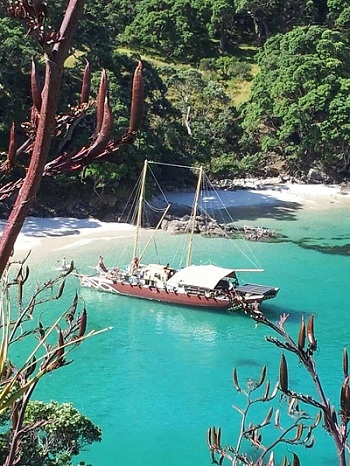 Ngāi Tahu whānau will have a rare opportunity to stand on the deck of the magnificent voyaging waka, Haunui, when it sails down to Te Tai o Araiteuru (the southern east coast) at the beginning of March.

Haunui is the double-hulled voyaging waka that recently completed a 25,000 nautical mile voyage as part of Te Mana o te Moana fleet of canoes, crossing the Pacific in an environmental and cultural odyssey. It is owned and maintained by Te Toki Voyaging Trust in Tainui, under the maru of Hoturoa Barclay-Kerr and is berthed at Auckland Maritime Museum, where it is the focal point of educational and cultural activities in the Auckland area.

A number of Ngāi Tahu joined the Haunui crew on its Pacific voyage. One of those, Brendan Flack of Puketeraki, has been working with captain, Hoturoa Barclay-Kerr, to sail Haunui down to Bluff. It will be an excellent chance for Ngāi Tahu whānau  to get involved.

“This will be the first time a waka like this has sailed in our wāhi for a very long time, so it is a special occasion,” says Aoraki Voyaging Trust member, Eruera Tarena.
“Ngāi Tahu will be able to sail and crew on the waka when it is in our waters. It’s stopping at Kaikōura, Okains Bay, Puketeraki and Awarua, so the journey will be broken up into legs for some whānau to jump on. Haunui has a crew of sixteen and I imagine we may be able to organize some day trips for whānau. It would be awesome to get our tamariki and kaumātua a chance to sail on her while the opportunity is there.”

While a draft sailing plan is in place, final dates will depend on weather conditions. As it stands though, Haunui will leave Waitangi on 7 February after the annual celebrations and is expected to arrive at Kaikōura in early March and after further stops, will be based at Puketeraki for three weeks.

The entire trip will be a continuous wānanga and it has been supported by the Ngāi Tahu Fund. Wānanga activities will include marine monitoring, education on environmental issues, whakapapa, modern and traditional navigation, kōrero around voyaging waka, whanaungatanga and tikanga on canoe building.

“There is much excitement among those who have already responded to our pānui and there are still opportunities for other rūnaka to participate,” says Brendan Flack.
“We hope that by spending several days each at harbours in Canterbury, Otago and Southland, we will maximize opportunities for Ngāi Tahu to participate. It’s a great opportunity to  showcase our Kai Tahutaka and to learn from the crew of Haunui too. It will give those of us who have crewed on her the chance to repay the manaaki show them on Te Mana o te Moana and it will be a chance to strengthen ties between Ngāi Tahu and the Te Toki Voyaging Trust – to stand on the deck of this magnificent waka has the potential to change lives,” Brendan says.