For the last three years we have seen The Arts Foundation Springboard programme provide funding and mentoring support to seven artists with outstanding potential across a diverse range of disciplines. In 2021 a new partnership between Te Rūnanga o Ngāi Tahu and Springboard saw the creation of Wai-Toi-Moroki, a Springboard award dedicated to a Ngāi Tahu ringatoi. Turumeke Harrington is the first recipient of Wai-Toi-Moroki and as such will receive a $15,000 grant, and mentorship from an alumni of Arts Foundation whānau. Nā Hannah Kerr. 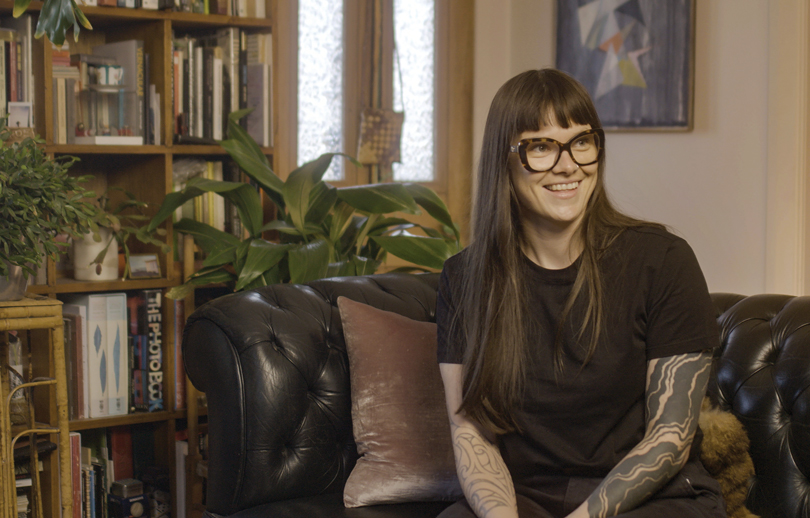 Growing up in Ōtautahi and Rotorua, Turumeke Harrington’s parents Kiri and Jonathan have always been her original influencers. Her mum, Kiri, is an artist and has worked as an arts advisor for local government. “She has always made things, and made things with us, and always created opportunities for us to make things with other people,” says Turumeke.

Even though her dad would disagree with the way she describes him and his mahi, she views him as a conceptual artist who happens to work in the science and engineering field. “Between them they showed me the value of attempting new things, accepting failure and being kind and helpful.”

From a young age Turumeke always knew she wanted to create things, but just wasn’t entirely sure what. She made dolls, clothing, jewellery, and filmed and edited videos. At the age of 16 she moved to Te Whanganui-a-Tara to study industrial design at Te Herenga Waka/Victoria University. After finishing her degree she says she didn’t consider herself an artist, but still enjoyed making things, so she moved to Melbourne to study shoemaking.

While in Australia she worked as a product designer but it was evident when she moved home to Aotearoa to have her daughter that she really didn’t want to work mass producing things. “I also didn’t really want to make things on other people’s terms.” This is when she decided to study Fine Arts at Te Whare Wānanga o Waitaha/ University of Canterbury. “It gave me the starting point for the mahi which I make now, generally big, spatially responsive installations.”

Specialising in large sculptural installations and contemporary visual arts, her work meets somewhere at the intersection of art and design. Her creations have been previously described as “a feast for the eyes” and are filled with bright colours, space, humour and links to her whakapapa as a way to engage her viewers into a deeper narrative.

Being Māori and Kāi Tahu fundamentally informs how she thinks about her work. “To me mātauranga Māori is the common sense, the observed and embodied knowledge of te ao Māori. More broadly, a philosophical way of understanding the world and how we should, or could, relate to it.” 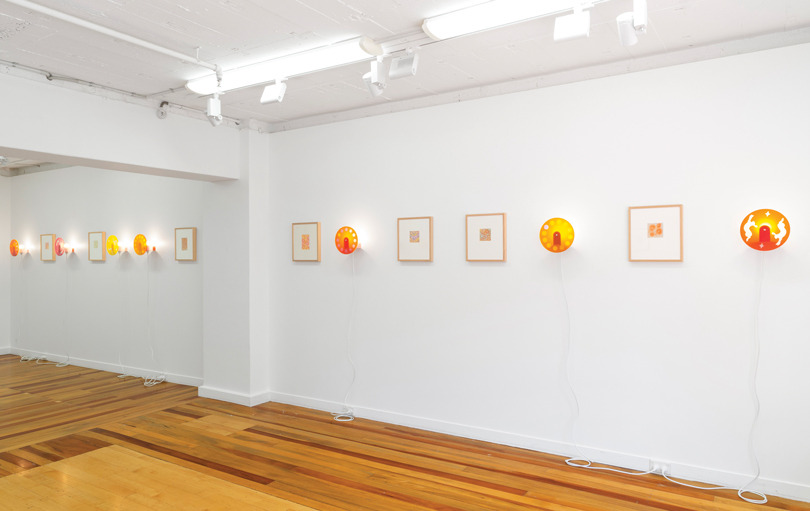 For Turumeke her work is an extension of herself and a reflection of her whakapapa. Sometimes it is explicit, for example, “having the name of my tupuna and namesake, Ema Turumeke – woven through webbing in a sculpture,” or in other works, it is more abstract. “Our relationships with whakapapa are always changing and growing, mine is no different.”

Moving back to Te Whanganui-a-Tara after completing her degree she began working full-time as an exhibition technician and designer. At the end of 2021 she completed her Master of Fine Arts from Massey University with an exegesis called Playing nicely with others and an exhibition SPECIAL TIME Ehara i te tī, both of which she is very proud of. Since the end of last year, Turumeke has been working full-time as a self-employed artist. “It is hard … but also very enjoyable and rewarding and I feel really privileged to be able to do so. Long may it last,” she laughs.

While the Wai–Toi–Moroki award will gift Turumeke the funding and support she needs to continue her work as a fulltime artist, it also gifts her the opportunity to spend time with arguably one of her greatest inspirations, her daughter Pia.

“Pia is a huge influence on my work and wanting to make a good life for her and be a good example to her is really important.” As a mother, creating art that Pia can also engage with is front of mind. Play is a key consideration in her work, so is tactile learning. “Learning our stories, observing everyday life, and making artworks that slowly build on each other and act as mnemonic or memory devices for us is exciting and important to me as an artist and as a mum”. 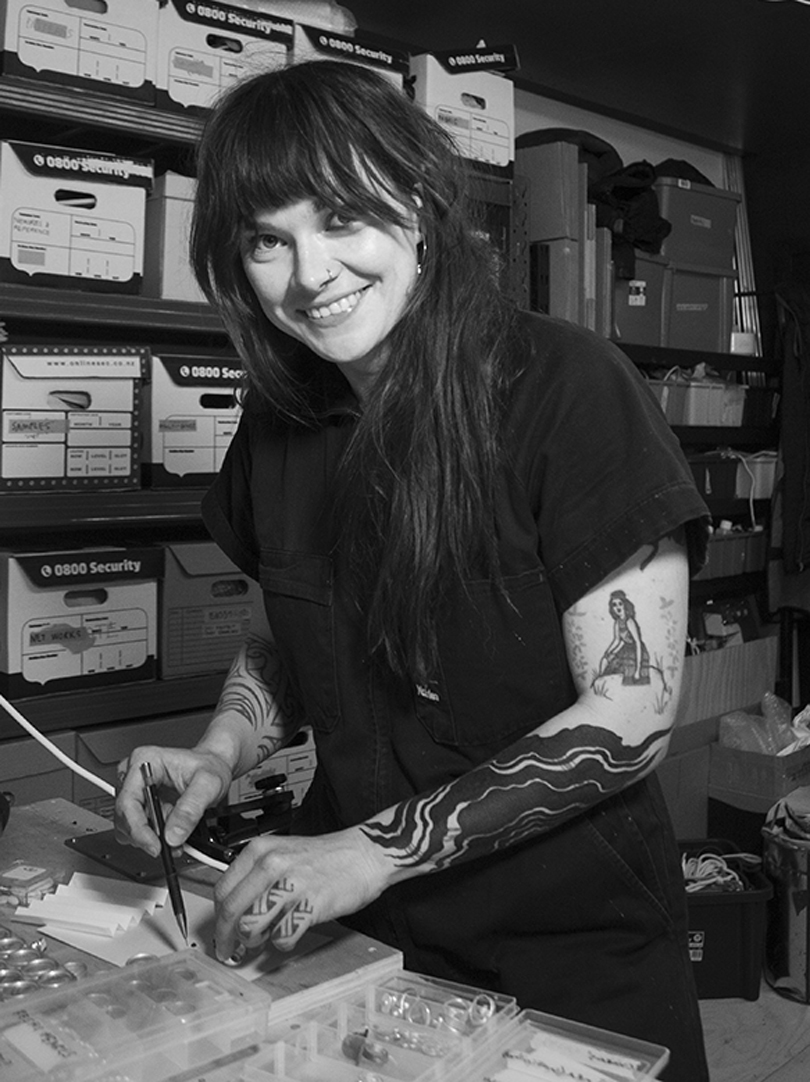 When asked her favourite medium for creating art, Turumeke says she really enjoys working with textiles. “Mainly for the variety of oppportunites, methods and materials that they encompass but also because I can work safely and easily with them at home around Pia.”

Wai–Toi–Moroki offers financial funding but also pairs the winner of the award with a mentor from the alumni of Arts Foundation whānau. Turumeke will be mentored by 2021 Arts Foundation Laureate Brett Graham (Ngāti Korokī Kahukura), a sculptor who creates large-scale artworks and installations that explore indigenous histories, politics and philosophies. The opportunities to work through concepts and developments with Brett makes her excited for the future.

For Turumeke creating art is her way of processing and dealing with being a part of this world. The support given by Te Rūnanga o Ngāi Tahu is something she is very appreciative of. “Being Kāi Tahu gives me a sense of grounding and belonging to stories that are bigger than me, and I really enjoy the sense that I am small in the scheme of things.

“The award also demonstrates that the work I am doing has value, culturally and monetarily. Realistically it costs money to be alive and make art. My whānau and I are hugely appreciative. I also feel very privileged to be receiving the inaugural Wai–Toi–Moroki award.”

If whānau want to view some of Turumeke’s work she has upcoming exhibitions at Govett-Brewster in Ngāmotu (July), Te Ara Ātea in Rolleston (July) and The Dowse in Lower Hutt (October). She often also has mahi at Henry Trading in Lyttelton. Whānau can also find and support Turumeke through her website turumeke.com or via her Instagram @turumeke.