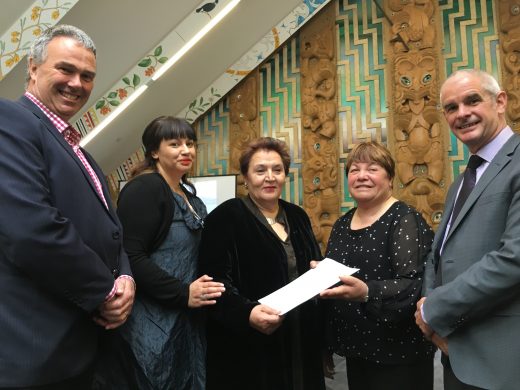 A new initiative to restore the health of Lyttelton Harbour/Whakaraupō was launched today.

Representatives from the five organisations signed a Memorandum of Understanding at Rāpaki Marae today.

The need for a Whakaraupō/ Lyttelton Harbour catchment scale management plan was discussed in detail through the development of the Lyttelton Port Recovery Plan process last year.

Sedimentation in the upper harbour had increased since human settlement and as a result the health of the harbour and traditional food sources were in decline.

Both the community and the partner organisations recognised the need for a collaborative process, and today’s launch signified a new way forward.

“For me the focus needs to be on actions, more than words. We need to restore the harbour as a source of mahinga kai for future generations,” he said.

“The future of Whakaraupō is tied to how well we can work together on this project. It is up to us to secure the wellbeing of the harbour.”

A group comprising representatives of each partner organisation will build on existing knowledge to identify actions to improve the health of the harbour. New research will be conducted, where required, to fill in knowledge gaps.

The group will also collaborate with the community through a series of workshops to ensure the community’s ideas are incorporated into the action plan.

Te Hapū o Ngāti Wheke (Rāpaki) chairperson June Swindells said it was up to everyone to play their part in restoring the harbour.

“For Rāpaki this has been a long held aspiration to work with council and the wider community on a ki uta ki tai (mountains to the sea) management approach.”

“We remember the harbour as it was, like a great picnic basket – able to supply a feast. I believe everybody who lives around, visits or uses the harbour has a role to play in bringing it back to great health.”

Lyttelton Port Company chief executive Peter Davie said the partnership between the five organisations and community was a great move and LPC were proud to be part of it.

“LPC is committed to actively engaging others to understand the harbour environment and using that knowledge to manage port operations and developments.

“We see this as the start of an enduring framework for understanding and improving the health of the harbour. The coordinated approach will support community aspirations to ensure the harbour is maintained and protected for future generations to enjoy,” Davie said.

“The development of the Whakaraupō Catchment Management Plan is a positive outcome of the Lyttelton Port Recovery Plan, and is a real opportunity for collaboration between the parties involved and the communities around the harbour,” he said.

“There is strong interest from residents in the water quality and health of Lyttelton Harbour and I look forward to developing initiatives and outcomes that will bring about long-term improvements in these areas”.

“There’s an opportunity for this project to make a real difference to the health of the harbour. Environment Canterbury looks forward to working with these partner agencies and the community.”

The community workshops will begin in September.

More information can be found here.