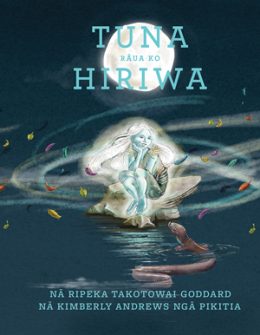 Once there was a beautiful water nymph named Hiriwa (a reo Māori word for “silver”). Every night she would flit along the river and dance under the light of the moon. Hiriwa was watched by Tuna, who longed to glow as she did and thought that if he played with Hiriwa in the moonlight, he would eventually glow like her.