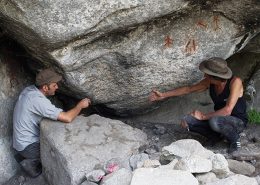 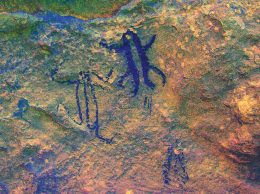 The first language of Te Waipounamu

Rock art is one of the oldest and most significant of the traditional arts, and considered by some an early form of written language: meaningful marks left for others to read. Some of those marks offer a glimpse of the world in the time of moa and pouākai (Haast’s eagle). Earlier that morning I’d witnessed a drawing of the giant eagle soaring across a cave roof at Frenchman’s Gully. In this landscape of hawks and falcons, it’s easy to imagine the artist looking up to see that vast shadow pass above.