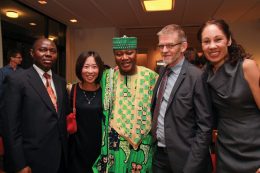 “There are lots of high points in a job like this. I’ve met the President of Japan, the Emperor of Japan, and Hilary Clinton for instance; and in Japan, I was involved in launching an education promotion project called ‘Game On English’, aimed at improving English language skills in Japan in the lead-up to Japan’s hosting of the 2019 Rugby World Cup and the 2020 Olympics,” says Rebecca Adams, senior advisor on MFAT’s China desk.