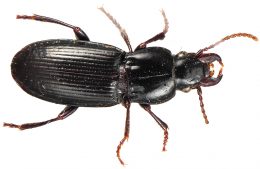 Scientists love a good mystery, but ecologists from Lincoln University have truly been left scratching their heads after an exhaustive but futile search for a rare and endangered species of flightless Canterbury ground beetle. Only 10 specimens of the Eyrewell ground beetle (Holcaspis brevicula) have ever been captured. All were found in the Eyrewell Forest, an exotic pine plantation 40 kilometres north-west of Ōtautahi, which was returned to Ngāi Tahu in 2000 as part of the Ngāi Tahu Settlement Act of 1998.