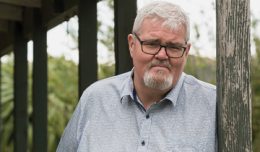 Tahu Potiki (1966-2019) was deeply versed in the traditional history of Ngāi Tahu and a recognised authority on our treasured manuscripts, many of which were published in translation in TE KARAKA. Tahu was Chief Executive of Te Rūnanga o Ngāi Tahu (2002-2006) and subsequently served as the Ōtākou Representative on Te Rūnanga until his death. From 2007 onwards he regularly contributed articles on Ngāi Tahu and wider Māori questions to the Christchurch newspaper, The Press.