A Master Stroke: Creating the next generation of Māori leaders

Nearly 130 years after Tā Apirana Ngata of Ngāti Porou became its first Māori graduate, the University of Canterbury is achieving success in being the first tertiary institution in the country to offer a Master of Māori and Indigenous Leadership (MMIL) degree. The two-year degree is the brainchild of senior lecturer and Head of School – Aotahi/Māui School of Māori and Indigenous Studies, Sacha McMeeking (Kāi Tahu – Waihao). 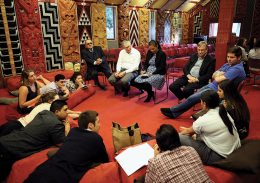 Throughout my reo Māori learning journey the words “mua” and “muri” have consistently confused me. Two seemingly simple words made harder to grasp, because the thinking behind them is in contrast to the way we think as English language speakers.

One of the architects of the Ngāi Tahu Settlement recently created a stir when he suggested it was time for senior Māori leaders to stand aside and allow younger generations to come through in leadership roles.

Tā Tipene O’Regan made the suggestion at the Parliament Buildings launch of the Manu Ao Academy’s Fire that Kindles Hearts: 10 Māori Scholars, a book which profiles 10 respected Māori academics in terms of their leadership roles.