Koukourarata, Ōnuku, Taumutu, Wairewa and Mahaanui Kurataiao, briefly returned to their offices at 79 Hereford Street on Wednesday 13 April. They received praise from USAR officials at the scene for their preparation and planning. The small team, which also included volunteers from Te Rūnanga o Ngāi Tahu, had just 90 minutes to retrieve essential files and equipment but were well prepared and appropriately attired for the hard work ahead.

The Papatipu Rūnanga offices are located on the 6th floor and so it was 12 flights of stairs up and then each time the backpacks were filled – 12 more flights of stairs down. The comments from the USAR officials were that the team showed a lot of humour and coped well with the difficult task, pitching in to assist each other. As people retrieved the items they required, there was a real sense of efficiency and unity. Congratulations to everyone involved with both the planning and the physical task of retrieval. 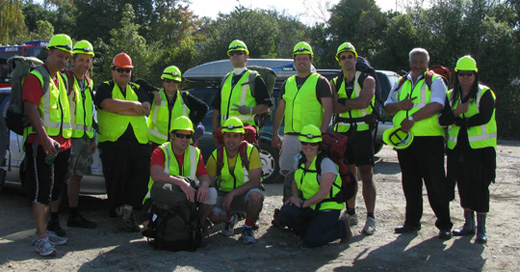 Ready for action – Runaka staff supported by Office of Tront staff prior to entering the building (Sheena Sherrat-Smith taking photo).

At lunchtime of 13 April, Wairewa, Koukourarata and Mahaanui Kurataiao met at the Ngāi Tahu Hub for an initial briefing with Ngāi Tahu staff who had volunteered to help.

We were issued with safety gear and backpacks for those that didn’t have them. We then travelled to the Canterbury Business Recovery Group assembly point where we were joined by Te Taumutu and Ōnuku. 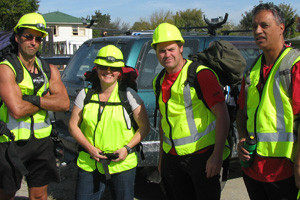 Following check-in and a briefing from the recovery group, we then boarded a bus that would take us to our office building via Manchester Street, Lichfield Street and Oxford Terrace. Despite authorities having cleaned up these streets over the past five weeks following the earthquake, nothing prepared us for the devastation that we saw.

Arriving at “the strip” we disembarked the bus and received a final briefing from a structural engineer, USAR and police or security. Being the occupants of the top floor we were the first sent into the building, with the power out we were grateful to Dottie for organising our head lamps and off we trekked up 12 flights of stairs – a journey we were to all repeat several times over the next 90mins. It’s amazing what an adrenalin rush can help you achieve! 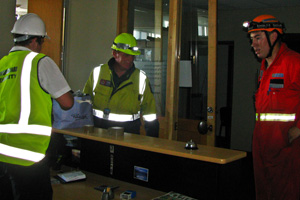 Members of USAR and the Security Team checking to see if everything is ok.

We were grateful to USAR who had come through and picked up cabinets and furniture thrown over by the earthquake and its subsequent large aftershocks, which made it somewhat easier to move around the floor collecting files and belongings.

Returning to the assembly point we were able to reflect on the day’s activities and the sights we’d seen. We were all very relieved that there were no aftershocks while in the building (though a 3.2 aftershock rolled through prior to us entering the building).

Our sincere thanks to Justine and Dottie from People and Performance for organising the safety equipment and coordinating Office of Tront staff volunteers; to Aubrey ‘Aubz’ Hughes – who assisted Koukourarata, Brett Lee and Teone Sciascia – who helped Wairewa, Craig Pauling – who helped Takuahi Research and Development, Joseph Hullen came to assist but due to the number restrictions wasn’t required by our floor. He then volunteered his services to the Canterbury Business Recovery Group and ended up assisting the elderly owners of Victoria Associates on Levelone1. We also extend our thanks to Jason Arnold, Ben Te Aika and Raniera Dallas for offering their services.