A treasure house for future generations 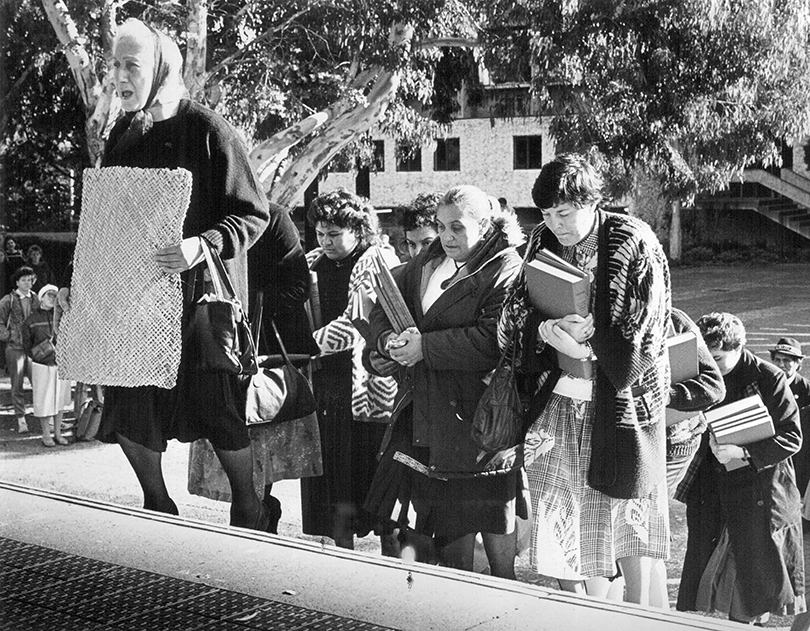 Above: Aunty Jane Manahi, Puamiria Parata, Elizabeth Cunningham, Reihana Parata, Koa Mantell, and Cath Brown ascend the steps of the James Hight Library at the University of Canterbury carrying bound volumes of the evidence submitted to the Waitangi Tribunal as part of the Ngāi Tahu Claim. Copies of the evidence were placed in the Ngāi Tahu Archive and a complete set was also presented to the University of Canterbury. Photograph The Press, 7 June 1989.

On 6 December 1978, a small group of Ngāi Tahu representatives gathered in the Library Committee Room at the University of Canterbury. Ngaitahu Māori Trust Board representative for Te Ika-a-Māui and inaugural Ngaitahu Research Fellow, Tipene O’Regan, addressed the room.

“My motive in taking some steps towards this day and towards this archive are that primarily our people should have a secured and protected treasure house for future generations.”

Later that day a formal agreement establishing the Ngāi Tahu Archive was signed by the Vice Chancellor, Professor A.D. Brownlie, and the Chair of the Ngaitahu Research Fellowship Trust, the revered senior kaumātua within Ngāi Tahu, Riki Te Mairaki Ellison. The Archive would be physically housed at the University but would remain the property of Ngāi Tahu. Riki Ellison summed up his thoughts simply when he said, “It’s a very important day [for] the preservation of taonga of the past.”

“If Ngāi Tahu want to be a tribal nation, if we actually want to own ourselves, we have to own our own memory. We have to be the primary proprietors of our own heritage and our own identity. We can’t have it sitting in other people’s libraries and archives. We’ve got to command it, we’ve got to promote our own narrative, and if we can do that, we get a clear notion of what we want to be as a people in the context of the evolution of Aotearoa New Zealand.”
Tā Tipene O’Regan

Four decades on, Tā Tipene remains at the forefront of the Archive’s development. He chairs Te Pae Kōrako, an advisory committee of tribal scholars and cultural leaders that has guided the work of the Ngāi Tahu Archive team since its re-establishment in 2012. Tā Tipene remains a stalwart advocate for the Archive, which he says is essential to our rangatiratanga:

“If Ngāi Tahu want to be a tribal nation, if we actually want to own ourselves, we have to own our own memory. We have to be the primary proprietors of our own heritage and our own identity. We can’t have it sitting in other people’s libraries and archives.

“We’ve got to command it, we’ve got to promote our own narrative, and if we can do that, we get a clear notion of what we want to be as a people in the context of the evolution of Aotearoa New Zealand.” 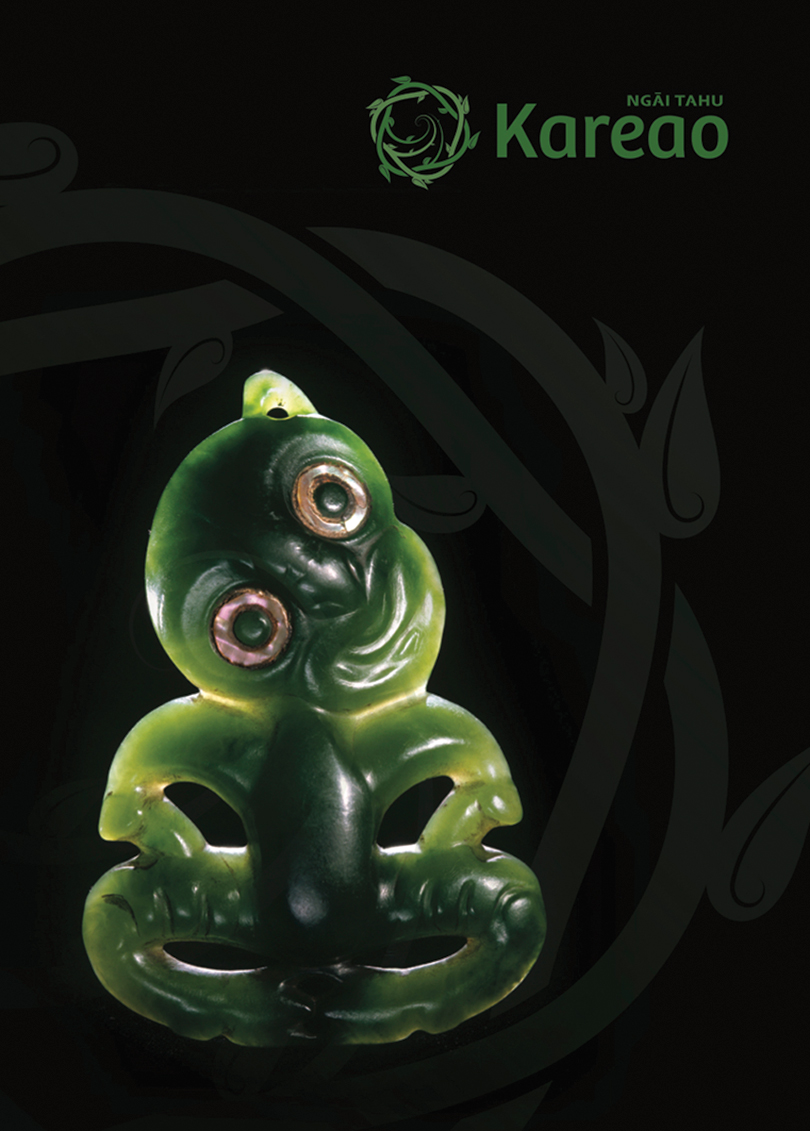 Above: This beautiful hei tiki, fashioned from stone tools, is recorded as having been gifted to Edward Shortland by a rangatira in 1840. It is part of the ‘Shortland pounamu’ collection that was gifted to Ngāi Tahu by the Crown in November 1997 at Kaikōura on the occasion of the signing of the Deed of Settlement between Ngāi Tahu and the Crown. The gift marked the significance and importance of the settlement of Te Kerēme. 2019.0783.1: Ngāi Tahu Archive.

In its 41-year history the Ngāi Tahu Archive has been through a number of metamorphoses. However, it has always maintained its fundamental aim – to preserve and protect tribal archives and make them accessible to Ngāi Tahu people, both scholars and the “flax roots”. The genesis of the archive in the 1970s came at a time when the core business of the Ngaitahu Māori Trust Board was managing the small tribal pūtea afforded by provision of the Ngaitahu Claim Settlement Act 1944, and distributing educational and kaumātua grants to Ngāi Tahu beneficiaries. At that time any thought of revisiting Te Kerēme was still a distant dream – the newly-formed Waitangi Tribunal had not yet been empowered to investigate historical Treaty claims. Even so, the collation of the Ngāi Tahu historical record was high on the Trust Board agenda, promoted in no small part by the advocacy of Tā Tipene, and others including Te Awaroa (Bill) Nēpia (Ngāti Porou), friend of Ngāi Tahu and head of the University of Canterbury’s Māori department.

In 1976, Nēpia approached the Trust Board requesting its support for the establishment of a Ngaitahu Research Fellowship. He wanted his department to develop courses and research reflecting Māori perspectives on New Zealand history, with a particular emphasis on Te Waipounamu, and consequently, Ngāi Tahu. It was envisaged that the fruits of such study would be published in the form of a Ngāi Tahu history.

The Trust Board agreed that there was a sense of urgency to this kaupapa; and that the longer the task was left, the more difficult it would become, and the more incomplete the result. In response, the Ngaitahu Research Fellowship Trust, a charitable trust of the Ngaitahu Māori Trust Board, was formed. Chaired by Riki Ellison, the other members were Elizabeth Crofts, Waha Stirling, Bill Nēpia, and Sid Ashton. The aims of the trust were twofold: to foster post-graduate studies in Ngāi Tahu history, and to establish an archive for Ngāi Tahu.

Tā Tipene was appointed the inaugural Ngaitahu Research Fellow, and began two years of full-time research in 1977 on the traditional history of the migrations of Ngāi Tahu and Ngāti Māmoe. This flowed on to the establishment of the Archive (then known as The Ngaitahu Māori Archive) the following year. Over the next 10 years, a number of small collections were deposited into the Archive.

The WAI27 Claim intervened in the mid-1980s, resulting in the collation of vast amounts of research material. This in turn led to a major deposit of material in 1989, comprising all the evidence, submissions, and supporting papers submitted to the Waitangi Tribunal for the Claim. Then, in April 1996, a large collection of Ngaitahu Māori Trust Board papers was transferred into the Archive, which was by then under the care of the University’s Macmillan Brown Library. Today, in addition to the Macmillan Brown, the Archive has repositories at Te Whare o Te Waipounamu, and the Hocken Library in Dunedin. 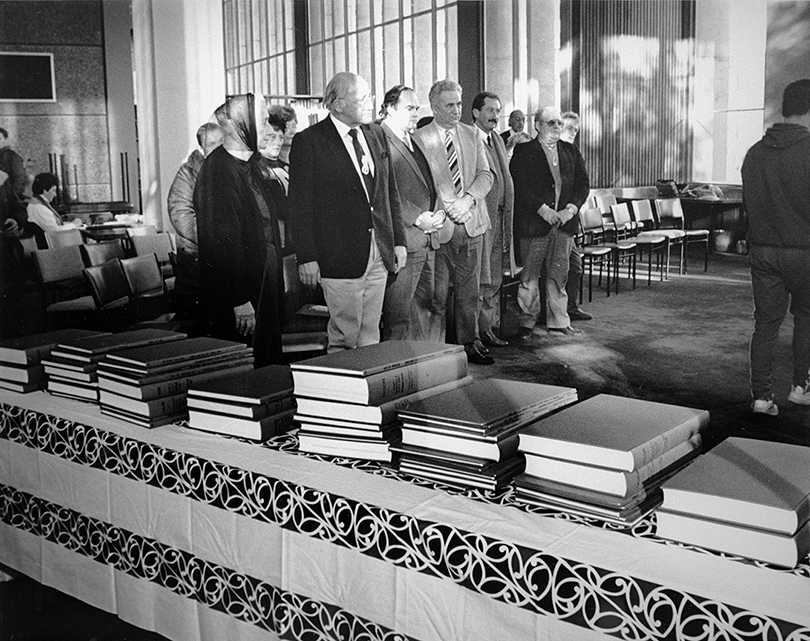 “The Ngāi Tahu Archive is about delivering Ngāi Tahu knowledge to Ngāi Tahu whānui,” says Takerei Norton, who has managed the Archive since 2012 when Te Taumatua took over responsibility for it. “It’s also about Ngāi Tahu gaining and maintaining intellectual control of the tribe’s history.

“The work our team has been doing over the past seven years to reinvigorate the Archive is the beginning of realising the dream which began in 1978.”

In addition to caring for documentary material held in the Archive, the team works proactively to identify and digitally repatriate archives of tribal significance held by external institutions such as Te Rua Mahara o te Kāwanatanga Archives New Zealand. It also provides advice to whānau about the care of their own collections, and works with whānau and hapū on heritage projects including exhibitions, oral histories, interpretation, and the development of educational resources.

This year marks a new era for the Ngāi Tahu Archive, with the recent launch (at the Ngāi Tahu Hui-ā-Iwi ki Murihiku) of the online archive database, Kareao. Named for the ubiquitous supplejack, a black vine that meanders its way through the lowland forests of Te Waipounamu, Kareao is an apt metaphor for the new, publicly accessible database. Like kareao, the database leads from one point to another, linking, connecting, and ultimately taking explorers in myriad directions of discovery. Kareao provides unprecedented access to the Archive, which includes manuscripts, photographs, maps, biographies, oral histories, taonga, and audio-visual material.

Kareao sits alongside other history and memory projects developed by the Ngāi Tahu Archive Team in recent years, including Kā Huru Manu (the Ngāi Tahu Cultural Mapping Project), and the 2017 publication of a book: Tāngata Ngāi Tahu: People of Ngāi Tahu.

Senior Archivist Jill Durney was recruited from the Macmillan Brown Library. Tā Tipene acknowledges her extensive skills, saying her work is “one of the most amazing things that we have at the moment”.

With an extensive career in libraries and archives behind her, Jill has long been an advocate for Māori in the library sector. Under her watch, the University of Canterbury’s first Māori librarian was appointed and an open-access Māori and Pasifika focused collection established, shedding light on material which had hitherto been largely hidden. When her expert opinion was sought by Te Pae Kōrako regarding the future direction of the Archive, Jill immediately advised that Ngāi Tahu needed an archive management system. 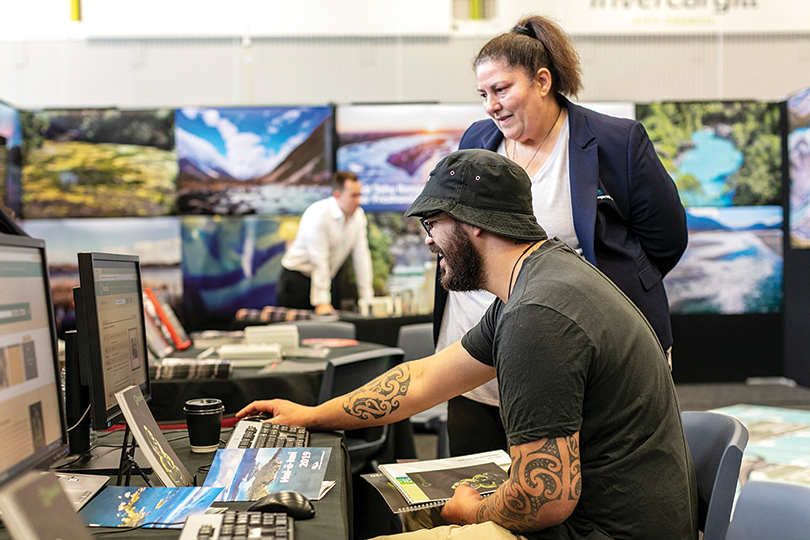 “Other indigenous groups do not necessarily have the funding or the momentum to deliver something like this. It’s a world first, and it’s an opportunity to turn the whole approach to archives on its head.

“This is the Ngāi Tahu story. It’s not the government’s story, and it’s a story that cannot be told by any other archival institution.

“At its heart, it’s about rangatiratanga. It’s Ngāi Tahu ownership of Ngāi Tahu knowledge, and I think that’s absolutely fantastic.”

With that in mind, Kareao has been designed primarily for a Ngāi Tahu audience. Ngāi Tahu terms and place names are used where possible, to make it easier for whānau to navigate the database.

The Ngāi Tahu Archive team has already been approached by national institutions for further collaborations that will allow previously inaccessible material of tribal significance to be made available via Kareao. As the team writes more descriptions on archival entries with tribal scholars and whānau, Kareao will become the authoritative record.

Takerei Norton emphasises that the launch of Kareao is only the starting point. “There are currently 4,000 records available via the database, but there is so much more work to be done; including the archiving of the organisational records of Te Rūnanga o Ngāi Tahu.

“We also hope to develop a similar archive module for rūnaka to store and protect their own archive collections at a regional level.”

Takerei also acknowledges the role played by Te Pae Kōrako. “This mahi would not have been possible without their guidance and wisdom. It is impossible to overstate their importance to the kaupapa.

“They have the dream and the vision. Our job is to make that reality.”

The Ngāi Tahu Archive Team is dedicated to working with and for Ngāi Tahu communities to actively compile and interpret our collective memory, and make it more accessible to our own people.
Visit Kareao online at www.kareao.nz.