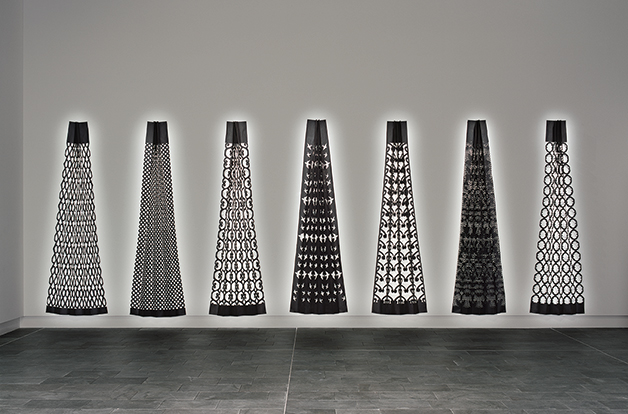 The current courthouse in Ōtautahi is hardly the kind of place you’d want to hang out in – a concrete tower block with the air of sternly rebuking passers-by. And there’s no trace of Ngāi Tahu culture or sensibility. But the vision for Te Manatū Ture me te Kāhui Whakamarumaru, the new precinct, is that it will be not only a welcoming place but an inspiring one, with Ngāi Tahu tikanga embedded in its very bones.

Contemporary multimedia artist Lonnie Hutchinson (Ngāi Tahu, Ngāti Hāmoa) and carver Fayne Robinson have been commissioned to bring a Ngāi Tahu aesthetic to the $350 million-plus precinct, which will house staff from the Ministry of Justice, Police, the Department of Corrections, the Fire Service, St John, and Civil Defence and Emergency Management agencies. But what does a Ngāi Tahu aesthetic look like? Lonnie explains that she’s drawing on historic accounts of Ngāi Tūāhuriri, her own artistic practice and belief that whakapapa brings the past into the present.

Lonnie has exhibited in group and solo shows around Australasia and internationally. Her art, she says, has a feminist bent. “I make work about women’s histories and the things that women do.” She’s known for her intricate, large-scale paper cut-outs, which she crafts by hand. Their lightweight composition and the old-fashioned idea of craft as feminine, decorative, and lightweight – therefore not “serious art” – contrasts with the heavyweight cultural and sexual politics and histories the cut-outs refer to. One project, the video installation Black Pearl, alluded to Polynesian women who were kept as sex slaves in the holds of pearl trading ships.

As well as cut-outs, video, and installations (arrangements of objects), Lonnie also works in sculpture and performance art. The Justice Precinct commission isn’t her first public art work – if you visit the Auckland Art Gallery, you’ll see her carving-like laser-cut designs on the American oak panels flanking corridors off the foyer (titled Tupu Te Māramatanga). The Justice Precinct project, however, is her largest to date.

Her starting point was a 100-page brief supplied by Matapopore, the Ngāi Tūāhuriri earthquake recovery steering group that is providing advice on the Christchurch Central Recovery Plan. The brief details the struggles of the hapū and its achievements and strong historic ties to Ratana and the Labour Party. She arrived at two concepts. One is a huia feather design printed in glass on both layers of five double-glazed windows, each measuring 10 m2. Viewed across the windows, the feathers form a zigzag pattern, suggestive of the contemporary headband worn at kapa haka. The huia design was inspired by a lushly vivid 1857 description of chiefly ornamental dress. Huia feathers are black, but when mock-up prints in black were hung over the windows of architects Warren and Mahoney’s Christchurch offices for a trial-run, they cut out too much light. Hutchinson hit upon the idea of using gold, which lets in more light and alludes to taramea, the scented seagrass used for headbands worn by rangatira. She hopes to drop lights between the two window layers. The printed windows, called frits, will take a year to manufacture.

Her other structure is a 6 m high, 25 m long aluminium kākahu (traditional feather cloak) that will wrap around the car park’s first floor. She studied photos of a kākahu made with kākāpō feathers housed in Scotland’s Perth Museum and Art Gallery, and drew on the weaving expertise of Matapopore arts advisor Tui Falwasser.

“Below the kākahu I’ve designed a garden with landscape architects Boffa Miskel. It talks about the whāriki, or the mats on the ground that you can walk on. A tāniko pattern – the zig zag pattern on cloaks – emerges with the planting, which is all natives.”

What does she hope people’s reactions will be to her work, and the precinct itself? “First of all for everybody to feel, ‘Wow, I like that.’ Or, ‘When I look at that I wouldn’t think it was a courthouse or police station.’ This is going to be an amazing experiment – they’re going to have education tours for schools; they want it to be a social, hang-out place, there’s going to be a central courtyard, ponds, designer furniture… So that’s really exciting, because it’s about new ways of working, of thinking.”

Even more exciting is the role of Ngāi Tahu. “We should be really excited and proud, because this is never going to happen in another city. Ngāi Tahu is in a unique position to contribute to the city, to how it looks,” she says. “This is amazing for an iwi to be able to work with Pākehā to make something together, rather than it being so Pākehā and there’s no evidence of any Ngāi Tahu culture. And to make something contemporary as well, because after all it is 2015 and we are a contemporary people.”