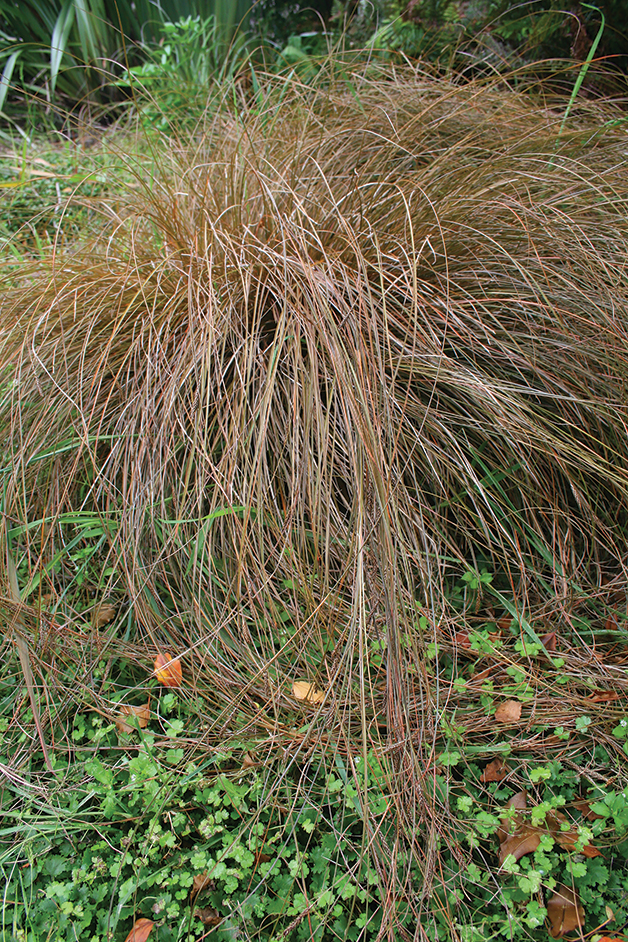 Mānia is a densely-tufted, hardy, grass-like sedge that historical records suggest was mainly used for bedding and waist belts by Ngāi Tahu.

Botanical references describe it as a very distinctive ornamental grass with colours ranging from shiny to dark green to yellow/green, red/green, bronze, and various shades of brown or golden brown, depending on the source.

Mānia usually grows to about 50 cm tall in free-draining soils under scrub or open forest from coastal to montane regions of the North, South, Stewart, and Chatham Islands. It is rarely found in wetlands or permanently damp shaded places.

It thrives in full sun, light shade, and moist well-drained sites. It is drought tolerant, and resistant to browsing by deer and rabbits.

Flowering stems from September to November range from 35 to 75 cm, but as the seed matures, the stems stretch up to two metres in length and lie along the ground, probably giving rise to the plant’s alternative name “Trip Me Up”.

Its Latin name flagellifera, translates as “bearing a whip-like appendage”.

The only reference to its traditional use by Ngāi Tahu in Herries Beattie’s Traditional Lifeways of the Southern Māori is as bedding.

Beattie describes in some detail the construction of rara (beds) using poupou (posts) driven into the bare ground, and a framework of battens, kareao (supplejack), akatea (rātā vine) or plaited harakeke arranged to create a springy sleeping platform.

The frame was covered with wīwī (rushes) and then mānia or pātītī (tussocks), before being covered with two layers of tīaka (flax mats) laid on top. The first layer (tīaka-wāhi) was made of unscraped flax, while the one above it (tīaka-hāro) that the person lay on was made of fine scraped flax. Generally this had been steamed in an umu, and was very white and soft.

Beattie’s contacts told him several kākahu of the softest whītau (flax fibre) were used as bed coverings. The name is the same as the cloaks worn, but those used as blankets were larger than those for personal wear.

One of Beattie’s informants said that when he was a boy he slept in a bed just like this, and that his flax kākahu were “fine, soft, and warm… as good as any Pākehā blankets.”

Ethnographer Elsdon Best uses the name maurea to describe a rush with reddish culms used to make ornamental belts, but it seems likely this fibre was from a different species altogether.

The belts were made from the bright reddish yellow leaves of maurea, with a proportion of flax fibre blended in to strengthen it.