I harvested my first ever kūmara from the māra in late autumn and was stunned to find that I had actually managed to grow a worthwhile crop. I could see that the leaves had grown prolifically over summer and into autumn, but was completely taken by surprise when I actually dug them up to find the quantity and size of tubers that had been produced. I had always assumed that it would be too cold to grow kūmara in Ōtautahi so I hadn’t even bothered to try in my 30-plus years of organic gardening. It’s not that I tried particularly hard either – the five kūmara tubers I planted were leftovers I had forgotten about in the kitchen pantry, and as they had sprouted leaves, I thought why not stick them in the ground and see what happens. This fortuitous opportunity coincided with me starting to trial the use of liquid GANS products. The makers of GANS say it can help promote positive magnetical and gravitational plasmatic fields to support plant health and productivity. They define GANS as a new state of matter consisting of a molecule of gas (“GA”) which becomes a nano (“N”) of itself, and appears as a solid (“S”) state of matter: GAs to Nano Solid = GANS (see TE KARAKA #80 for more details). 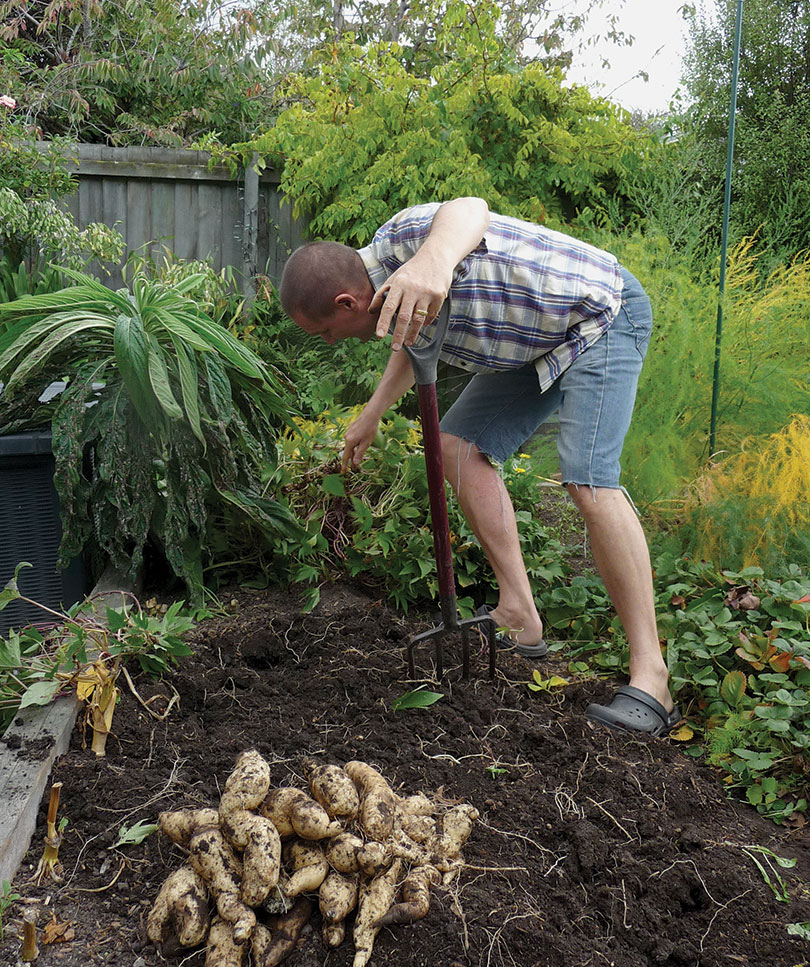 I prepared the soil by making a mound and sprayed the soil-enhancing GANS onto it. I then sprayed the tubers with the seed GANS mix, and placed the tubers in the soil longwise, and just deep enough so that only the leaves were exposed above the surface of the dirt. This was followed by a karakia as Rongo mā Tane knew I would need a miracle to get anything out of this experiment. This was at the beginning of December, which turned out to be a very cold and wet month here in Christchurch – the worst weather for trying to grow kūmara. Over the following summer and autumn months, however, we experienced above average temperatures with quite a few hot days. I gave the growing plants occasional liquid fertiliser along with GANS every couple of weeks for the first couple of months; then read that kūmara don’t need any extra fertiliser after becoming established so stopped doing that for the last few months. Another tip I learned was to lift up the trailing leaves so that they don’t put roots down into the soil; thus concentrating growth around the main tuber.

I intend to experiment further next spring/summer to vary the growing conditions to see how much of a positive effect GANS actually can have in helping to grow kūmara this far south.

At the end of April just before the first autumn southerly storm, I dug the kūmara up and was surprised to find that they had been far more productive than I could have imagined. I do need to say, however, that the crop wasn’t as prolific as kūmara grown in a warmer climate like Northland, but it was still sufficiently productive to be very much worth the effort. There were a number of fortuitous factors in my favour. Firstly, as it turns out, kūmara like a low soil pH of 6.0 to 6.5. I only tested for pH in late summer, and found mine was at 6.5. Secondly, the soil was naturally fertile and rich from all the compost that had been used on it; which kūmara thrive best in. Thirdly, this particular bed is in a sheltered, warm part of the garden with concrete paving on two sides, which would have helped to retain warmth in the soil. Traditionally, sand was added to the soil, and volcanic rocks placed around the mounds kūmara were planted in to help make the soil warmer. So all in all, through good luck and serendipity combined with GANS, the conditions were about as good as they can get for growing kūmara in my māra.

I intend to experiment further next spring/summer to vary the growing conditions to see how much of a positive effect GANS actually can have in helping to grow kūmara this far south. Overall, what I can say is that GANS had a very positive effect on plant productivity and health once I got the application rates and quantities right. Initially I thought more GANS would be better than the recommended 1 ml per litre amount, but no, it seems to have a negative effect to use more than is recommended. For example, my rīwai crop has been far more productive than usual (on a par with the modern varieties I grew), despite the fact that rīwai don’t normally like the hot daytime temperatures experienced in summer, whereas my winter leek crop is the worst I have ever grown; probably due to me using too much GANS when I planted them. While one growing cycle in my backyard garden does not provide conclusive proof either way as to the efficacy of GANS, it has shown me that GANS could turn out to be real game changer not just for home organic gardeners, but organic agriculture as a whole.

So why give a damn? What started as a speculative research hypothesis a few years ago on the terrible decline of insect numbers and varieties is turning more and more into confirmation from various research projects of a global “insectageddon” that is pushing many of the world’s insects down the path to extinction. And this could potentially cause a catastrophic collapse of nature’s ecosystems over time, according to the first global scientific review on the topic. There are two main reasons for this – conventional agricultural pesticide and biodiversity loss. For too long, conventional agriculture has hidden behind the lie that their toxic pesticides were necessary to maintain food production, when all the while these toxins were actually destroying our long-term future as a species. Without insects and biodiversity surviving and thriving, we have no future as a species. Plasma-based agriculture holds the potential promise of boosting organic farming production to a similar productivity level as conventional farming, without the toxic pesticides. On that basis alone I think it is worth continuing to experiment with GANS. After all, it is only the fate of our species that is on the line. Happy Matariki.