In the 2014 spring edition, TE KARAKA featured a story on Masashi Yamada, the Japanese philanthropist who offered Ngāi Tahu an unsecured multi-million dollar loan that allowed the settlement process to continue at a time when funds were low and negotiations were dragging on.

In a further act of generosity, Mr Yamada declined the final repayment of this loan, instead instructing that the money be used to set up the Ngāi Tahu Mātauranga Trust, to help secondary school students complete their education. In this issue (page 8) we share the story of a recent visit between representatives of the Yamada family and some of the alumni who have benefited from this fund. This scholarship is just one of the many opportunities available to our rangatahi to help them on their life’s journey.

And at the other end of life’s journey, we feature a story on the newly opened Whare Tiaki in Ōtautahi – a kaupapa Māori assisted living environment for kaumātua – the first of its kind and the new home of seven very happy and content residents, living full, active, and independent lives.

In September our assistant editor, Anna Brankin, had the privilege of visiting Whenua Hou – her tūrangawaewae – for the first time, as part of a small rōpū of whānau who made the journey to celebrate the unveiling of three pou carved by master carver James York and erected on the island. On page 12 Anna shares her experience of this special event.

Late last year I spent a wonderful couple of hours exploring the beauty and indulging in the serenity that is Bluff Hill. I remember thinking at the time how impressive the obvious pest eradication efforts were in the area, and noticing the positive impact that was having on the flora and fauna. As I have since learnt, this mahi is carried out by a group of 25 dedicated local volunteers who make up the Bluff Hill (Motupōhue) Environment Trust. In this issue we meet Estelle Leask, the wahine behind the kaupapa.

As the year draws to a close, I wish you all a safe and happy festive season. 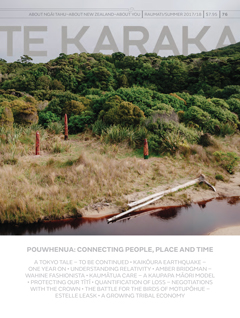