Kelly Tikao is a wahine with a passion for the revival of traditional birthing practices. 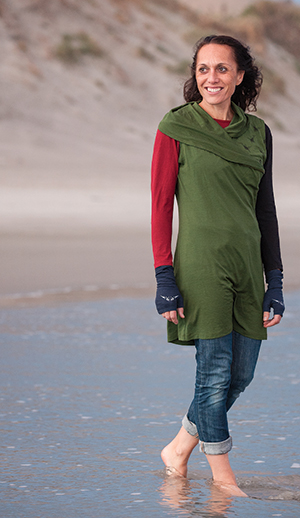 If you want something done, ask a busy mother to do it, because no one knows better how to manage every minute of their day.

As a full-time mother of five children under the age of 15, Kelly Tikao knows all about time management. She is also a full-time student working on her PhD in traditional Ngāi Tahu birthing practices.

And as if that isn’t enough to keep her busy, she holds a part-time job as a public health nurse caring for predominantly Māori and Pacific Island families, work that keeps her grounded and in touch with the health needs of her community.

It is a formidable workload considering Kelly’s partner, Rihari Taratoa-Bannister, is also studying for a degree in early childhood education. Between them they share the duties of bringing up an active young family.

Kelly was awarded two prestigious scholarships – one from the Health Research Council and the other from the Ngāi Tahu Research Centre – to complete her doctorate, tentatively titled Raro Timu, Raro Take – Conception, Creation and Customs Pertaining to Waitaha, Ngāti Māmoe and Kāi Tahu Birthing Traditions, through the University of Canterbury.

Significantly the title Raro Timu, Raro Take comes from a creation karakia pass-ed on by Kelly’s great grandfather Teone Taare Tikao, one of the last Ngāi Tahu tohunga to be taught in the old school of learning called the Whare Mauri.

She admits it is tricky striking a balance between raising a family and studying a subject she is so passionate about.

“It is frustrating to try and find the time to do this as a full-time student in three years. It may be pushing it,” she says. But juggling family life and study is not unfamiliar territory for her.

She trained as a registered nurse and as a young nurse graduate immediately started a Bachelor of Arts degree at Auckland University, majoring in Māori. In the evenings she did night shifts at Radio Aotearoa learning to be a radio announcer.

But nursing has always been the backbone of her career, funding her academic studies and supporting her growing family. While completing her Master’s at the University of Otago, she was pregnant with her fifth child.

“I was also working as a researcher for the Donald Beasley Institute so my days were full. I don’t know how I did it,” she laughs.

Her interest in traditional Māori birthing practices dates back to when she was pregnant with her eldest son Karamū, now 15, and met a Māori midwife who was practicing traditional birthing techniques.

“That was a total eye-opener for me,” Kelly says. “What she did was open my mind to what was and what could be.”

Kelly believes many traditional Māori practices around conception, pregnancy, and birthing have been largely forgotten.

They almost disappeared altogether when Māori drifted away from their rural roots to new lives and jobs in urban areas. People lost touch with their culture, which was not helped by repressive legislation that actively discouraged the practice of traditional home births.

Kelly and partner Rihari with their five tamariki.

“Around the mid 1960s most Māori women were giving birth in hospitals, apart from a few who were too far from a hospital.

“Since then we’ve had many generations of Māori women birthing in hospitals. It has become for many a hospital and surgical procedure, not a natural whānau experience,” Kelly says.

However, she believes the knowledge is still out there with some women still using the same traditional practices, karakia, waiata, and rongoā that their tupuna used. Some still tie the umbilical cords of their children with muka (processed flax fibre) and return the whenua (placenta) to the earth. The pito (the part of the umbilical cord left after the cord is cut) is also returned to the earth, at a different location.

Sourcing information for her Master’s thesis was a challenge in itself. Details of traditional births were not easily accessible, often wrapped into stories around significant historical characters.

“The information is out there, it’s just about knowing where to look,” Kelly says. “A lot of the information is still in our karakia, in our waiata, in our whenua, in our moana, and even in our rangi, so I always say as long as we are surrounded by our environment, the knowledge repositories are still there.”

Kelly is grateful to people who opened her mind to traditional birthing practices, women who allowed her to film them for a documentary she made, and also to those who challenged her about the relevance of reviving ancient practices in a modern world.

One Ngāi Tahu kaumātua gave her the encouragement she needed to hear when he said the iwi had to actually recover its creation stories and birthing traditions, remember them and retell them before Māori could “come back into balance.”

“Through my study I find that all this comes back to finding that equilibrium, that identity. I believe part of the key is understanding how we came into this world, to understand where we are going.”

She explains this concept to others as a story without a beginning.

“We’ve got an ending, we’ve got some sort of a middle that can, for some be a struggle at times, but we forget to talk about our beginning, our creation stories, our birthing journeys. Many of us have lost that awareness of creation rituals around conception, pregnancy, and birth. These traditions and maternity rituals have for valid reasons been lost to us for a long time.

“Eventually I hope with more research into the way we came into being and by encouraging the revival of some of these practices, that we can bring back the beginning of our story.”

With her health background, Kelly would like to take her research to the next level by incorporating traditional practices into a clinical setting.

“I believe we shouldn’t be deprived of using traditional Māori birthing practices just because a woman chooses to go into a hospital to give birth. Parents can still perform karakia, tie the umbilical cord with muka, and use traditional Māori implements to cut it.”

She would like to see these techniques included in a comprehensive package that is routinely taught as an integral part of the Bachelor of Midwifery degree.

It is more than just a revival of traditional cultural practices, she says.

“It’s about a link to tūpuna, a link to whakapapa, and a cultural strengthening right from birth, not just for the baby, but for the māmā, pāpā, and the whole whānau.

“I believe we still hold genetic and cultural knowledge, but we haven’t tapped it for a long time,” she says. “I think my job is to help bring that knowledge out.”

As part of her Master’s thesis, Kelly made a documentary Iho – A Cord Between Two Worlds based on her studies, and has presented her findings to nurses, medical students, Māori researchers, and other groups on the marae and on campus.

Her documentary was first released in 2011 and she has had such good feedback on it, she is still making copies for people. Ultimately, she says it is important to her that her doctorate has similar practical application for Ngāi Tahu.

She would like to make another documentary freely accessible to whānau Māori and help create a resource that provides more information for people wanting to use traditional birthing practices and ceremonies.

Kelly would also like to see a more holistic approach to the well-being of young people, many of whom have lost touch with their culture and traditions.

“Our tūpuna prepared our young people for the day they would come together and conceive, because it was the health of that baby and the nation at stake. In order to have a healthy baby, you have to have a healthy couple, and that wasn’t only physical, it was spiritual.”

The next challenge for her is to help create “a cool way of presenting this knowledge to our young people, because I think we have lost the sense of responsibility around this, and it is our youth that need to carry our babies and this knowledge into the future for Ngāi Tahu.”

Kelly is in the second data-gathering year of her study, and expects to complete her PhD in 2018.