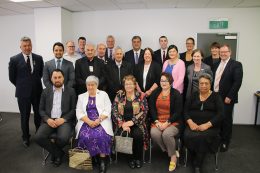 I am honoured to be able to announce the achievement of a significant milestone in our Ngāi Tahu Claims Settlement negotiations with the Crown.

Late last year Te Rūnanga o Ngāi Tahu received a $179,998,704.22 payment from the Crown as a result of the Relativity Mechanism which is an important section contained in the Ngāi Tahu Claims Settlement Act 1998.

I would like to thank our CEO, Arihia Bennett, and her team who led discussions with the Crown to secure this Relativity payment.

This is a further momentous milestone for our people, and is testament to the vision and foresight of our Ngāi Tahu Claim negotiators led by Tā Tipene O’Regan. I want to pay further tribute to our kaumātua and rangatira who had the wisdom and foresight to ensure the Relativity Mechanism was included in the Ngāi Tahu Claims Settlement Act which assisted in concluding our settlement negotiations with the Crown.

Te Rūnanga o Ngāi Tahu has made the decision to invest this Relativity payment with Ngāi Tahu Holdings Corporation, who continue to grow our economic base and increase our tribal footprint which will result in increased distributions to support the cultural, social and economic aspirations of Ngāi Tahu Whānui

This payment made by the Crown to Ngāi Tahu has symbolically occurred 20 years on from our settlement. It is a humble and timely reminder of the legacy and responsibility Te Rūnanga o Ngāi Tahu has to protect and grow our tribal base for future generations.

The Ngāi Tahu Claims Settlement Act and the Relativity Mechanism

At the time of settlement in 1998, Ngāi Tahu settled our Ngāi Tahu Claim “Te Kerēme” for approximately one per cent of the estimated economic loss suffered by Ngāi Tahu. At that time the Crown imposed a self-determined cap of one billion dollars on all Treaty of Waitangi claims for all iwi. This cap, known as the Fiscal Envelope, was a mechanism to effectively limit the Crown’s fiscal exposure in settling all Treaty of Waitangi claims.  In order to progress and conclude Te Kerēme our Ngāi Tahu negotiators sought and received an agreement from the Crown that if the one-billion-dollar cap was breached then further redress would be made to Ngāi Tahu. Waikato-Tainui has a similar Relativity Mechanism in their settlement with the Crown.

The Relativity Mechanism is an agreement between the Crown and Ngāi Tahu which ensures that as one of the first iwi to settle, our economic redress continues to remain relative with all future claims settled by other iwi.

If whānau have questions about the Relativity Mechanism, there is material on the Ngāi Tahu website, and the latest issue of Te Karaka contains an article on the subject. Please find a link to that article here:

Finally, I would like to take the opportunity to sincerely acknowledge those past and present who fought for and supported the resolution of Te Kerēme.