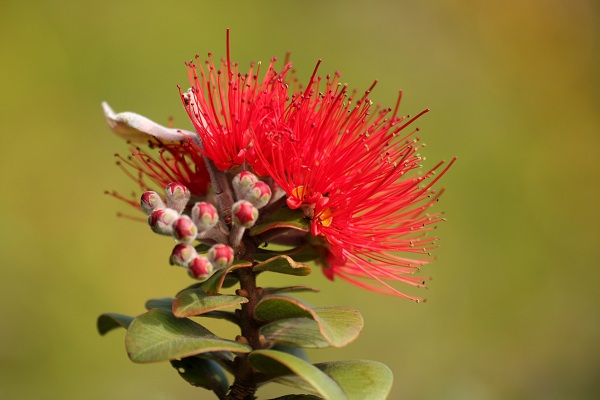 For the conservationist in all of us, the sight of rātā in full flower against a backdrop of snow-covered mountain peaks is a sight to warm the heart. Until it advertises its presence with its flamboyant blaze of scarlet, its foliage just blends into the bush.

Southern rātā is common on Te Tai Poutini (the West Coast) and Rakiura (Stewart Island). It is less commonly found in Te Ika a Māui, and is rare in Northland. It prefers colder regions with a high rainfall. That explains why it grows as a dense ground cover on the subantarctic Snares, Auckland, and Campbell Islands.

The southern rātā is smaller than its northern cousin, growing to about 15 metres with a trunk up to a metre in diameter, as opposed to the 25-metre height and 2.5-metre diameter of northern rātā.

There are a few other conspicuous differences between them. Northern rātā often starts life as an epiphyte, sprouting in the fork of another tree and gradually sending aerial roots down to earth, often ultimately consuming its host.

Southern rātā also sprouts aerial roots that go in search of crevices, soil, and moisture, but the tree normally starts life as a well-grounded seedling. It has good resistance to strong winds and salt spray, which makes it ideal for coastal environments.

Its leaves are dark green, glossy, 3–6 cm long, and sharply pointed. Its rough flaky bark is an ideal medium for other epiphytes such as astelias and kiekie. The trunk of the tree is  often gnarly and twisted.

Southern rātā is best known for its brilliant show of scarlet flowers between November and February, depending on locality. It is a major honey source on Te Tai Poutini and provides an abundant nectar supply for bellbirds, tūīand kākā.

While the southern rātā is not regarded as threatened in Te Waipounamu, it is uncommon in Te Ika a Māui. Possums have developed a strong preference for its taste, and the tree does not tolerate intensive browsing. Consequently, it is part of a conservation plan by Project Crimson to protect it and its pōhutukawa cousins from destruction by browsers.

For southern Māori, the hard, dark red timber of rātā was highly prized for carving. They used it extensively wherever a strong, dense timber was required for weapons, paddles, construction beams, and eel weirs. It was also used for mauls and clubs for dispatching seals or pounding aruhe (fernroot).

The timber was used for some refined pieces such as traditional flutes, waka huia and spinning tops, while the roots of rātā and kōwhai were selected and shaped into hooks for hāpuku.

Historical sources say taiaha were generally made of rātā in the south and maire further north. Paiaka, known as tewhatewha in Te Ika a Māui, were also made of rātā or mānuka.

Early European settlers also valued “iron-hearted” rātā for its hardness, strength and durability; all qualities that made it useful for ship-building, bridge construction, cartwheels, wood-turning, and in the absence of metal, as a substitute for machine bearings. It also burnt hot as firewood as well.

Like most trees of our native bush, rātā has a long list of medicinal and industrial uses for its bark and leaves, best documented by Murdoch Riley in Māori Healing and Herbal.

The external bark was cut from the sunny side of the tree for use as a splint to bind fractured bones and broken limbs. A lotion made from the bark was used to bathe aches, pains, wounds, and bruises, and to treat ringworm.

Riley records that the inner bark of rātā was used to treat diarrhoea and dysentery. In 1890 the famous French nun Mother Aubert patented her Natanata recipe of koromiko, pukatea and rātā bark or toatoa. She claimed it was unrivalled in the treatment of chronic illnesses of the stomach, especially in young children and old men.

“Many small children who have been abandoned by doctors and are dying from diarrhoea and continuous vomiting have been restored to perfect health in two or three weeks by the use of Natamata,” Riley records she wrote to the French Consul in 1890.

The sap of the rātā vine is believed to have antiseptic and anaesthetic properties, and was used to treat toothache.

Unless it is grown in ideal conditions and moist soil, rātā is slow-growing; but that makes the wait for this beautiful rākau rangatira of our native bush to flower all the more worthwhile.