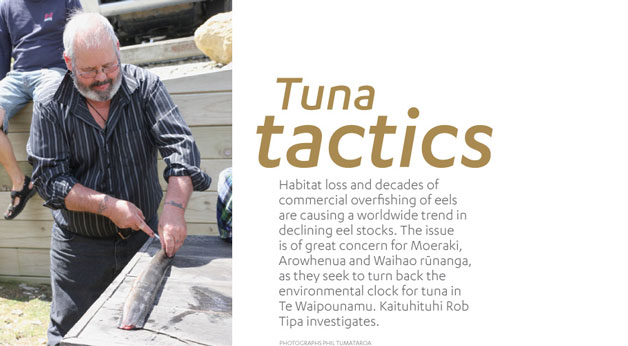 When Kevin Russell-Reihana turned 12 he moved to Temuka, and his uncle Toby Anglem began teaching him traditional ways of catching tuna (eels).

He was taught toi or “bobbing”, where worms are threaded on to harakeke (flax) fibres, the tuna are snagged by their teeth and then flicked into a pool of water that has been dug on the riverbank, where the tuna release their grip.

Russell-Reihana (Ngāi Tahu – Kāti Huirapa) has used traditional hīnaki (eel pots), but only rarely, and mainly to preserve the tradition for the benefit of his mokopuna.

He prefers to use a single-tine or three-prong spear rather than nets, usually blind spearing in the watercress on both sides of the riverbank.

The method he uses to process tuna is the one he was taught by his uncle 50 years ago. Tuna are cleaned, gutted, hung and then split open to dry by the pāwhera method.

He is now passing his skills and experience to his nephew and mokopuna to keep the tikanga alive.

“It’s not something you can force on people,” he says. “You’ve got to be keen or it’s a waste of time. There was nothing else to do in those days.”

But Russell-Reihana is just as keen on conservation, worried that eel populations in the Waitaki catchment have yet to recover from unregulated commercial fishing more than two decades ago.

In the 1970s entrepreneurs discovered a ready export market for eels. From 1975 to 1985 commercial eelers were working the Temuka, Ōpihi and Ōrari Rivers. At the peak of the export trade, 35 tonnes of eels were taken from these three catchments annually.

“It was open slather,” Russell-Reihana says. “Anyone could get a permit to go and catch two tonne of eels. They cleaned them out.” 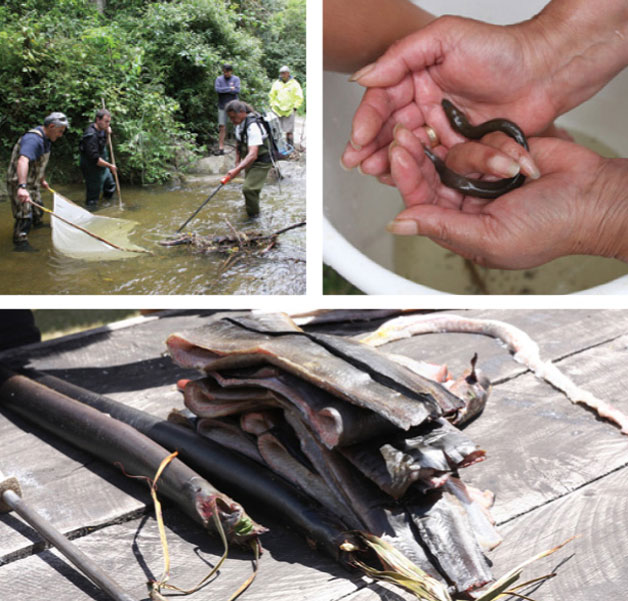 Clockwise from top left: Trapping elvers ready to transfer upstream; and completing the cycle; tuna processed and ready to dry.

After the commercial eelers packed up their nets and left, he walked the same kilometre of river he had worked since he was a boy and caught just three eels.

He would like to see a mātaitai reserve established east of State Highway 1 between Horseshoe Bend at Ōrari and the Smithfield freezing works in Timaru. He says it needs to remain in place for at least five years to give longfin and shortfin eel populations a chance to recover.

His goal is to stop commercial eelers targeting the river mouths to intercept mature tuna migrating to sea to spawn, and young elvers returning from sea.

And he would like to see the total quota for the rohe reduced to below 20 tonnes.

At present commercial eelers can operate anywhere in the region. Russell-Reihana says they should be forced to record where they catch their quota. In his rohe alone, six or seven commercial eelers have quota to take nine tonnes each.

Tuna are a long-lived species, and the time it takes them to reach reproductive age has implications for tuna stock management. National Institute of Water and Atmospheric Research (NIWA) findings show that male longfin tuna do not migrate to sea until they are 12 to 35 years old. Females head to sea to spawn between 26 and 60 years old. A large female of 140–160 cm may carry over 20 million eggs.

The information on the age of these eels was a revelation to many of the people who attended a tuna wānanga at the Moeraki marae in January. The wānanga, supported by the Ngāi Tahu Fund, aimed to teach whānau how to monitor eel stocks in certain rivers, restore damaged riverside habitats, and to introduce younger whānau to catching and smoking tuna.

Twenty years after eel exports peaked in the mid-1980s, Russell-Reihana believes tuna numbers are only slowly starting to recover. However, many individual tuna he finds are still much smaller than what he regards as a sustainable takeable size.

He fears a full recovery of the tuna fishery in the area may not happen in his lifetime.

“It’s an on-going battle,” he says. “We need help now to stop the commercial exploitation of tuna. If we don’t do something now, we’ll lose them.

“There were that many eels in the Temuka River in the 1960s, you didn’t have to go anywhere else. The Ōpihi and Ōrari were the same. We were catching eels of three or four kilograms by the hundred day or night back in the 1960s before the commercial eeling boom. I used to walk about a kilometre between the Temuka Bridge and the Manse Bridge and could catch between 100 and 150 eels.”

Representatives from the Moeraki, Arowhenua and Waihao rūnanga at the Moeraki wānanga were surprised by the comparative lack of eel recruitment on the east coast of Te Waipounamu.

Iwi resource management consultant Dr Gail Tipa (Moeraki) says the three rūnanga were addressing a problem dating back more than 60 years to when the first dam was built on the Waitaki River.

“We’ve really only started addressing it as a problem since the mid-1990s,” she says. “No-one does population assessments, so we have absolutely no idea how big the tuna population is on the Waitaki.”

“We don’t know how big it is and we don’t know what age it is, so there are huge information gaps you have to fill before you even start to manage it.”

They were building capacity for this work all the time with, some families now onto their third generation of volunteers setting traps, catching, measuring and weighing tuna, to aid understanding of tuna biology.

Trapping and transferring elvers from the Waitaki Dam to upstream habitats has been ongoing for some years, and volunteers were also catching migrant eels above the dams, and releasing them downstream so they could go to sea to spawn.

Initially rūnanga concentrated efforts on the process, and were happy to simply participate in management of the river’s resources.

Dr Tipa says they are now more directed in their approach, and focused on outcomes and building relationships with other resource users, such as irrigation companies, who often share the same goals of restoring a healthy river.

Both Dr Tipa and Mandy Home regard the Waitaki as their whakapapa river, the river they sing to on the marae.

Their generation grew up with dams on the Waitaki and had never known anything else, says Dr Tipa.

“We still think it’s beautiful,” she said. “I’m a lot more positive than we were even a year ago.”

In the 2010/11 season, just 21.7 kg of elvers were caught in traps at the base of the Waitaki Dam to re-stock eels in the catchment upstream. Dr Tipa’s colleague, NIWA Freshwater Fisheries Ecologist Dr Jacques Boubée, also took part in the wānanga. He says this is a very small number of eels for such a large river system, and he has no doubt the decline was because there were fewer elvers reaching the dam. 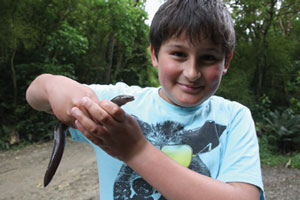 “There’s definitely been a decline there. I went through the Waitaki in the mid-80s and you could see elvers trying to climb everywhere. You don’t see that now,” he said.

“We need to confirm that by looking at other catchments nearby.”

Dr Boubée, who has worked on eels in New Zealand for more than 30 years, says a similar decline in young recruits has occurred on the St Lawrence River in Canada.

Canadians had to resort to capturing eels from elsewhere to reintroduce their scent into the Great Lakes, and hopefully encourage elvers to return up river.

Dr Boubée believes the Waitaki, like the St Lawrence, is possibly at the edge of the natural eel recruitment range and the decline in elvers may be the first sign of a recruitment problem across the country.

He says international trends point to a worldwide decline in eel recruitment. This year France recorded the lowest recruitment of freshwater eels it had ever seen, and the industry there held fears for their potential extinction.

There are also indications that elver recruitment, of longfin eels in particular, into New Zealand waters is now much lower than in the 1960s and 70s.

New Zealand’s longfin eels are one of the largest eel species in the world. They are long-lived and can grow to nearly two metres in length and weigh 25 kg or more. Shortfin eels are smaller, growing to 1.1m and at least 3 kg.

While both species are still the most common freshwater fish in our rivers, fisheries scientists are concerned about the scarcity of very large specimens.

Dr Boubée believes a combination of factors is responsible for the decline in elvers returning to New Zealand waters, especially longfin elvers.

Scientists think changes in ocean currents caused by global warming may have some bearing on their ability to return.

“To me the biggest issue for eels is habitat loss, before anything else,” he said.

Wetlands and swamps have been drained and are disappearing throughout the country to make way for agriculture.

Streams have been straightened and cleared of vegetation for flood protection and faster drainage, all of which has a negative impact on eel habitat.

Large hydroelectric dams, pumping stations, weirs and culverts all pose obvious obstructions to natural migration pathways of eels to and from the sea.

Other environmental factors include parasites, exposure to pesticides and pollutants, and nutrient enrichment of waterways.

Dr Boubée says over-fishing has undoubtedly had an impact. Commercial harvests in New Zealand peaked in 1972 at 2000 tonnes and have steadily declined since to around 700 tonnes.

Over the years, commercial fishers targeted large eels or primary breeding stock. Now the industry has voluntarily increased the minimum harvestable size limit and returns all female migrant longfins to the water.

Reserves have been created, a moratorium has been placed on new fishing permits and there have been significant reductions in allowable catch imposed on the fishing industry to reduce pressure on stocks.

“I’d hate to see commercial harvest stopped completely,” Dr Boubée says. “You can still harvest in a way that keeps the population sustainable.”

Despite such alarming trends for both longfin and shortfin eel species, Dr Boubée believes it is not too late to turn it around.

He says the first steps are habitat enhancement, recreating flood plains and ponds with more natural habitat and vegetation cover for eels, and better management of harvest.

Dr Boubée says we need to recreate safe areas where females can reach sexual maturity and migrate safely to sea to spawn. Also, we need to make sure that elvers can return from sea unimpeded by artificial obstacles.

“It’s going to take a long time to redress,” he says. “We won’t see a recovery in our lifetime, but we have to do something now.”