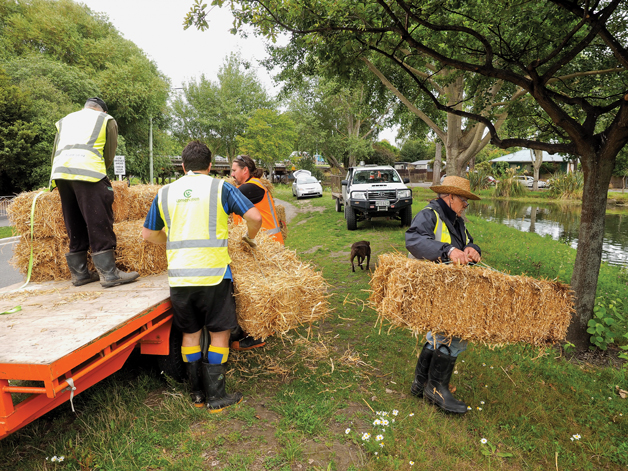 Volunteers at work on installation day.

From February to May every year, our much-loved adult whitebait scope the banks of lowland streams looking for a suitable place to lay and fertilise their eggs. If the habitat isn’t suitable, the eggs will not survive and there will be fewer whitebait in our rivers next year.

In Ōtautahi several groups have come together this spawning season to install dozens of straw bale stations along 3 km of two of the city’s waterways: the Ōpāwaho/Heathcote River and Lake Kate Sheppard (a key tributary of the Ōtākaro/Avon River). This is the largest-scale initiative of its kind. I have jumped on board the waka to help marry science and culture, communities and professionals, young and old in a bid to increase our understanding and love for our fish and their aquatic homes. For me it’s about helping to grow the next generation of kaitiaki and tangata tiaki. I want my tamariki, and theirs in time, to live in a world that recognises mahinga kai as a valuable part of our society and economy. And I also want to see more of our people making a living looking after our nation’s natural resources. 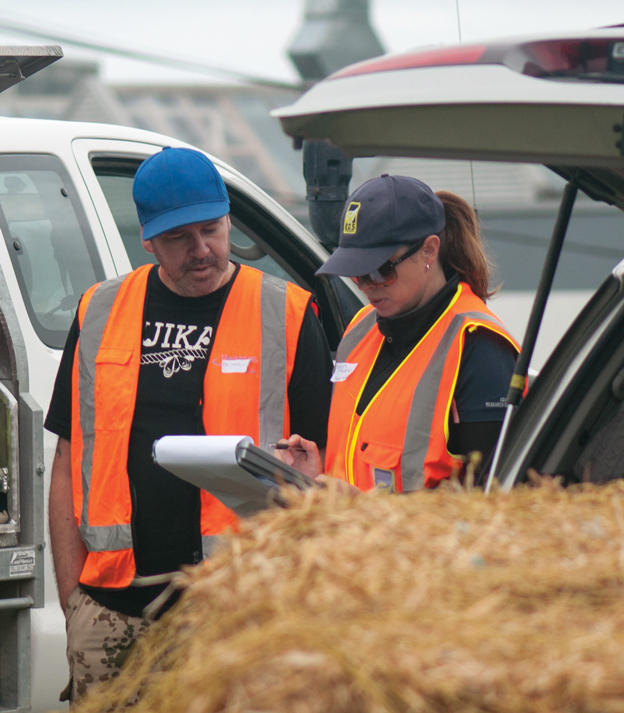 The name of our project, Whaka Īnaka, means, “causing whitebait”. Its key objectives are to improve this season’s spawning success, and determine where along our city’s rivers īnaka prefer to spawn.

Dr Mike Hickford (School of Biological Sciences, University of Canterbury) has been studying whitebait for nearly two decades. He knows that īnaka like to lay their eggs in the lower reaches of our rivers (near the “salt-water wedge”) along a very narrow band of dense vegetation at the highest spring tide mark on the riverbank. When the tide drops, the eggs are left out of the water and away from any caviar-craving predators from the river.

“The lifecycle of īnaka is absolutely dependent on having the right habitat in the right location,” Dr Hickford says. “This makes them particularly vulnerable to activities along the riverbank like mowing, which can destroy that habitat.

“Īnaka eggs need to stay moist throughout one entire lunar cycle, and mowing the long grass in which many whitebait will lay their eggs will expose them to the sun and wind and quickly dry them to death.”

“Spawning habitat is the ‘Achilles’ heel’ for īnaka,” says Shelley. “If they don’t have the right habitat, they won’t spawn successfully and we won’t have whitebait. It’s as simple as that!”

The beauty of straw bales is that they are easy to install and monitor, and they are inexpensive! Along with improving spawning success, they will ultimately highlight where along the riverbanks īnaka prefer to lay their eggs. This will help us plan for and promote more permanent solutions with those who manage and use these areas.

MEKA ĀHUAREKA Interesting Fact
The earthquakes of recent years caused land and water tables around Christchurch to rise and fall. This included the Avon-Heathcote Estuary, Te Ihutai Maroro, which sunk in the northeast and rose in the southwest. This affects where water flows, and may in turn have affected where the salt-water wedge reaches on the high tide.

Another key objective of the Whaka Īnaka project is to increase awareness and understanding of the fundamental needs of īnaka.

“Our people are pretty passionate about whitebait,” says Ivan Rūpene-Ryan. “We’ve been doing it for a while, and it pulls people onto our rivers every year, but it’s not like it used to be. There’s definitely less bait now than when I was a boy, and nowadays it always seems that our nets are clogged with algae.”

I am interested by the recollections of my whānau, some of whom were pulled out of school to camp on the rivers during the whitebait run. I also tune in to what aquatic scientists and researchers have to say. I figure that if I want mahinga kai to be recognised as a valued and viable cornerstone of our lives once more, then I need to understand what’s happening to the environments in which they live, love,
and die.

“We all have a part to play in the future of the city’s whitebait population through effecting positive change in the way we care for the riverbanks where the whitebait spawn.”
Shelley McMurtrie aquatic scientist, Whaka Īnaka Project Leader

To help deepen understanding, the Whaka Īnaka project team has teamed up with 18 local schools who will monitor the sites for pests weekly over the course of the project. The principal of Te Kura Kaupapa Māori o Te Whānau Tahi, Dr Melanie Riwai-Couch, says the partnership is of great benefit.

“The Whaka Īnaka project gets our tamariki out of the classroom and into the natural world. That works for our tamariki: learning through doing, science through culture. Many of them come from whitebaiting families, and they will be able to go home and tell their whānau how they have helped make more whitebait for next year. That’s the really cool thing about Whaka Īnaka.”

“We all have a part to play in the future of the city’s whitebait population through effecting positive change in the way we care for the riverbanks where the whitebait spawn,” says Shelley McMurtrie. “Once we can show with scientific rigour where they want to spawn, then we can go and have a robust conversation with Council to talk about how the river might be managed and maintained in the long-term to help cause whitebait every year.” 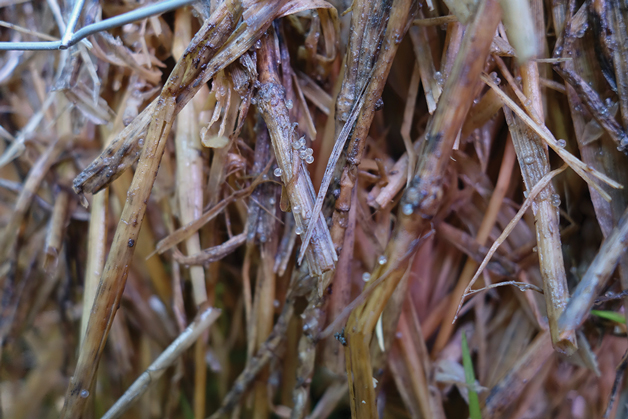 Riverside residents are crucial to the long-term success of this initiative. Signs have been erected at each straw bale site to share the project’s key messages and facts with those who use and care for the rivers. A Facebook page called Whaka Īnaka has also been created, to celebrate milestones and keep everyone up to speed.

The more word gets around, the more it seems that people want to support. Local businesses have chipped in with sponsorship and in-kind donations, and around 50 people joined us in late January to install the straw bales. Amongst them were three branches of my Reuben whānau of Tuahiwi.

“Our tupuna Te Muru was the kaitiaki of Pohoareare, a pā site on the lower reaches of the Ōpāwaho and a general name for the surrounding area,” says Arapata Reuben. Arapata chairs the Christchurch-West Melton Zone Committee responsible for freshwater management outcomes along the Ōpāwaho and Ōtākaro Rivers. “In 1880, Te Muru’s son Wiremu Te Uki presented evidence before the Smith-Nairn Royal Commission, claiming a number of mahinga kai sites along the Ōtākaro/Avon River and the New Brighton coastline on behalf of his people.”

Ko ngā whenua o aku tūpuna, kāhore i ahau.
The land of my ancestors does not belong to me alone.

Ko Ōtākaro te ingoa o te awa nei [Avon]. Nāku tēnei whenua.
He kāinga mahinga tuna nāku ko ōku pakeke.
Ōtākaro is the name of this river [the Avon]. It is where
we come to harvest eels and belongs to my elders and I.

Ko taku hākoro te kaitiaki o Pohoareare,
kei konā a mātou tūpāpaku.
My father [Te Muru] was the guardian of Pohoareare
where we have buried our dead.

It’s in our blood to look after our rivers and fight for our rights, and I’m proud to know that my whānau continue that legacy.

“Our elders knew the value of these wetlands and waterways,” says Makarini Rūpene, a diver and regular supplier of kaimoana for whānau, friends, and marae. “They are still a big part of our family life. We grew up on the rivers and estuaries and reefs. They were a playground and a classroom, and I am bringing up my children just the same. It taught me about ecosystems, the cycle of the seasons, the connections between moons and tides, and the effect they have on plants and fish. “Of course, the waterways also feed us and those around us. It’s who we are.” 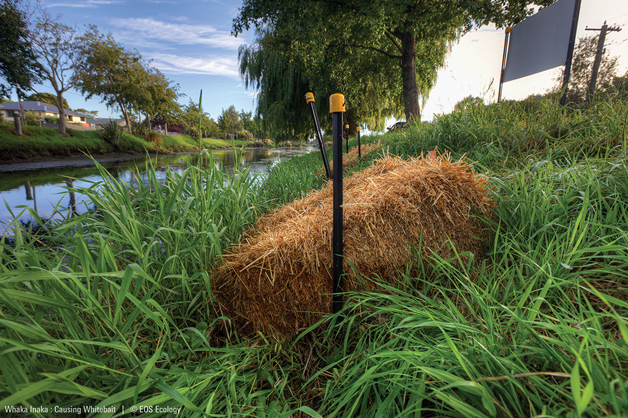 MEKA ĀHUAREKA Interesting Fact
The Ōtākaro/Avon River was once recorded as having the largest known spawning habitat in the National Īnaka Spawning Database. In fact, whitebait were so abundant when Pākehā arrived that they called them “cow-fish” on account of the fact that rivers turned milky white when they spawned.

How incredible would our city be if it became known for its great spring and autumn shoals of īnaka, feeding the food chain and pulling people from all over the planet to witness this rare phenomenon? I don’t think it’s too far-fetched, and it seems to me that whitebait is the perfect species to unite us in such endeavours. Whitebaiting is loved by Māori and Pākehā alike, and is as quintessentially “Kiwi” as it gets.

Moreover, the future of Christchurch’s residential red-zone is yet to be determined, and we – Crown, City/Community and Iwi – have an incredibly rare opportunity to design and develop this tract of land in respect of the water that runs under and through it, and not to neglect it.

Build for fish and the people will come. Build for people, and the fish will not.

Is that what Uncle Trevor Howse and old Rakiihia Tau meant when I heard them talk about mahinga kai as “our traditional economy”, built on the produce of the natural world?

Is it too much to think that īnaka could become the backbone of the city’s next economic bell curve too?

Whaka Īnaka is a collaboration between EOS Ecology (project lead), the University of Canterbury (School of Biological Sciences, Centre for Freshwater Management) and Ngāi Tahu (Te Rūnanga o Ngāi Tahu,
Ngāi Tūāhuriri Tangata Tiaki). It has been funded by the Department of Conservation through their Community Fund, and has received support of a number of local businesses, trusts and organisations.
Ka nui ngā mihi ki a koutou katoa. Mauri tū, mauri ora.