Whānau business “a way of life”

For the Connor brothers, the Ngāi Tahu/Te Āti Awa founders of the very successful, family-owned Waikawa Fishing Company, fishing is not just a business. It’s a way of life, as Kaituhi Rob Tipa recently discovered. 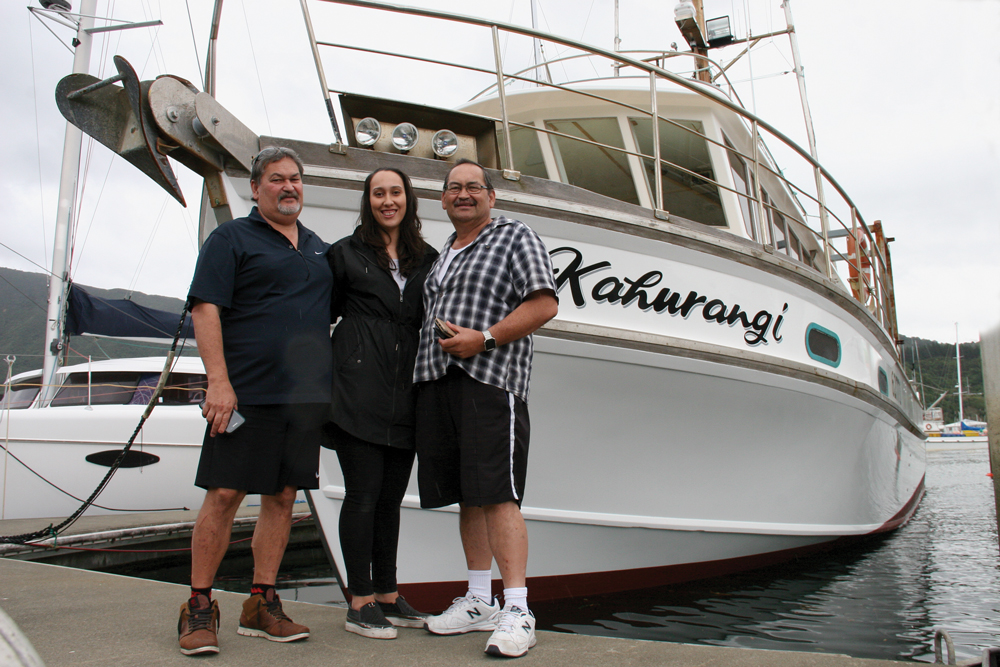 Steve Connor, his daughter Amber, and brother Geoff at the Picton Marina in front of Te Kahurangi, one of three fishing vessels the family’s Waikawa Fishing Company operates in New Zealand waters.

Geoff and Steve Connor grew up around boats in Picton, and were still at high school when they started dredging for scallops commercially.

“We used to go out after school and fish until dawn,” Geoff says. “We had a ball doing that, and that really got us hooked on fishing.”

Steve remembers progressing from dredging scallops to drag-netting for garfish after school and on weekends.

“I used to sell garfish to kids at Queen Charlotte College. I kept it in the science class’s freezer,” he says.

The Connor family has a long historical connection with the Sounds, dating back to Captain James Cook’s use of Ship Cove as a safe anchorage for his ships in the 1770s.

The Connor brothers’ Ngāi Tahu grandmother on their maternal side was the last person born on Motuara Island, a landmark in the outer Sounds, directly opposite Ship Cove.

According to his journals, Cook climbed to the top of the island for his first clear view through the strait subsequently named after him, and erected a flagpole to fly the Union Jack.

Geoff and Steve’s sister Glenice says the remains of the family’s homestead, gardens, and shelter belts are still visible on Motuara Island today.

Family folklore has it that Cook’s flag remained with the whānau for many years and was last seen in their old house at Waikawa; but where it is today, “no-one is saying.”

The brothers have fond memories of growing up in Picton, spending every spare weekend with their family out in the Sounds.

“The boat was too small for all of us to live aboard, so we pitched a tent and that was our base, sometimes for three weeks during the Christmas holidays,” Geoff says. “We never had to go out to the outer Sounds to get a feed of fish, pāua or kina.”

It was their love of the lifestyle that drew them into the fishing industry.

Nearly 40 years later, the Connor brothers reflect on their expansion into a multi-million dollar family-owned business that now employs 30 people, including many of their own whānau.

They have a fleet of three specialised offshore fishing vessels working around the New Zealand coast, catching high value seafood delicacies for markets all over the world.

“We know how to catch fish, and that makes a big difference in the fishing industry,” Geoff says with more than a subtle hint of irony.

“We have seen a lot of people, including accountants and bank managers, come and go. If you don’t know how to catch fish you’re wasting your time.”

“The company is not all about money. Sometimes decisions are made that are more about the well-being of the whānau than they are about the profitability of the company.”
Glenice Connor
Waikawa Fishing Company

The brothers vividly remember buying their first boat (Mavis) in 1981, a narrow 40-footer built in 1919. Their parents, Dale and Mildred Connor, mortgaged a section to raise a loan for the boys to buy the boat.

They started catching butterfish, then shark in the outer Sounds, and had a go at pāua diving. They also got a lot of stick from established fishermen who took bets on how long they would survive.

Through the early 1980s, interest rates of 25 per cent were almost crippling. Geoff and Steve’s wives Liz and Christine supported them for their first two years at sea.

”We ate a lot of fish, but those hardships build your character,” Geoff adds.

Today they look back on those early days with a real sense of nostalgia.

Steve reckons inshore fishing was more of a lifestyle than a business. Fishermen were happy to go to sea for a week to put food on the table for their families, and came home at weekends.

“We didn’t hammer a place that we knew we had to come back to,” he says. “We just took what we needed and came home.”

“We worked inside the Sounds and around Cook Strait,” Geoff adds. “We didn’t need to make a lot of money to survive, but we made enough.

“We didn’t know a lot about commercial fishing on the open sea, so we virtually had to teach ourselves all of that.”

Steve says their goal was never to become big players in the fishing industry.

When the quota management system was introduced, inshore fishermen lost the ability to sell fish they caught, and quota prices have subsequently gone through the roof, well beyond their reach.

Big fishing companies had the resources and capital to buy up the bulk of the quota, and now hold the power in the industry. Inshore fishing operations have to contract to catch quota owned by them.

He says the system has been really hard on small inshore fishing ventures. The industry used to support a lot of families who fished commercially out of the Marlborough Sounds. Now there are only a couple of families left. 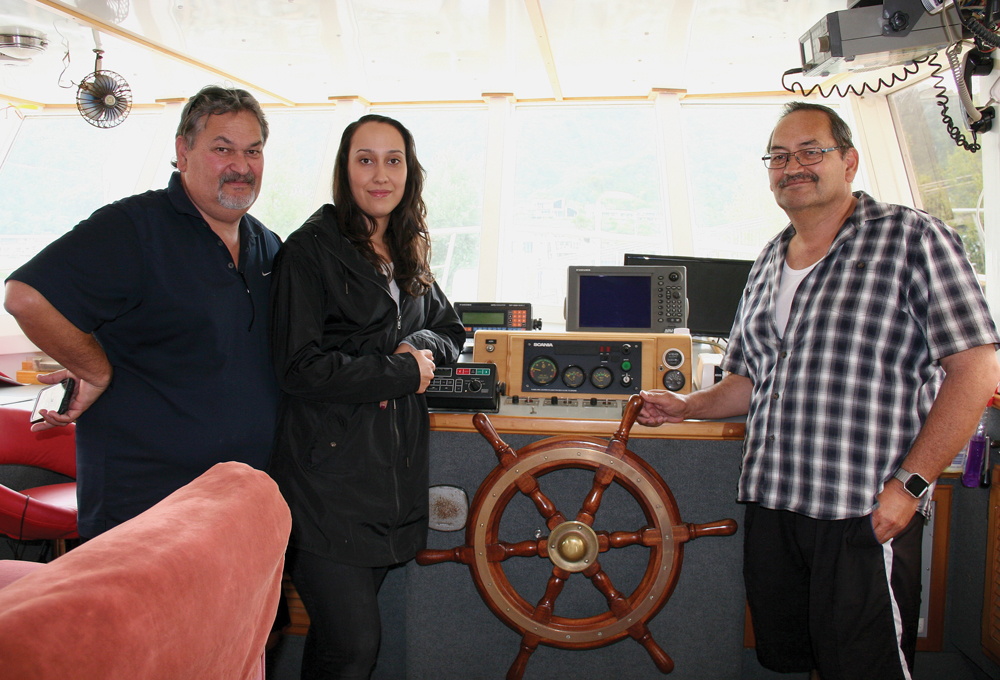 Steve, Amber, and Geoff Connor in the wheelhouse of Te Kahurangi, a fishing vessel the brothers had built in Picton in 1992 to catch bluefin tuna. The vessel has just come off the slip and is now used mostly to catch crayfish quota.

Through this period the Connor brothers seriously thought about walking away from the industry.

“The quota system pushed us into what we are doing today,” Steve says. “I think the reason we’re still going is we’re lucky to have kids who want to be a part of it.”

Steve’s daughter Amber and Geoff’s son Lance are learning the ropes of running all aspects of the business, from administration and marketing to the operations side of keeping their vessels at sea.

“The only reason our business is still going is because it’s adaptable,” Geoff says. “We’ll pick a species that no-one wants and develop it.”

The scampi fishery was a classic case in point. The fishery, developed in partnership with Ngāi Tahu Fisheries, now generates about half of their business.

When they leased quota for scampi from Ngāi Tahu, they had to borrow a couple of million dollars to upgrade their boats to catch this deep-water species.

“When we first started, leases for scampi quota were between 30 and 50 cents a kilogram because there was so much out there. Now it’s over $15 a kilogram, and that has happened within five years,” Geoff says.

“We turned an asset they had that was worth very little into some serious money,” Steve says.

For the Connor boys, it was a great opportunity to work with their Ngāi Tahu iwi, a business relationship that now spans 28 years. They also catch crayfish quota for Ngāi Tahu and other iwi.

Part of their scampi catch is packed and sold under their own Connor’s Catch brand, and part is sold under a Ngāi Tahu brand.

Steve and Geoff are always looking for opportunities to diversify into other types of fishing.

In 2014, the Waikawa Fishing Company, in conjunction with Nelson’s Cawthron Institute, was awarded a $7.8 million grant by the Ministry of Business, Innovation and Employment for six years of research into the scampi fishery.

A special hatchery, the first in the world, has been developed in Nelson to explore the potential to farm the species commercially in an aquaculture venture.

The brothers are also testing a range of innovative ideas to develop more sustainable fishing gear, including ropeless pots to harvest scampi.

They already have one boat exclusively using pots to catch fish, and have tested some promising techniques to reduce the by-catch of endangered marine mammals.

The family says their views on sustainability are a natural fit with the environmental principles of Ngāi Tahu, and they would like to work with the tribe in future to explore more sustainable fishing techniques.

Glenice explains that her brothers work hard, know how to catch fish, and have a strong sense of kaitiakitanga – a vision for their business to remain profitable and sustainable for their whānau in future.

“The company is not all about money,” she says. “Sometimes decisions are made that are more about the well-being of the whānau than they are about the profitability of the company.”

“Waikawa Fishing Company is not just me and Geoff,” Steve explains. “It’s our wives, our kids, our sisters, our whole family involved in what we are doing. It’s not just one person calling the shots.”

“The future for us is to keep building on what we have achieved,” Geoff says. “If you’re not moving forward, you are going backwards in this industry.”