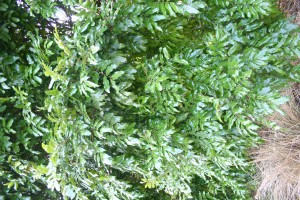 Tītoki is one of the most attractive specimen trees of our native forests, but few today would guess its seeds were once highly valued by both Māori and European for its high quality oil, writes Rob Tipa.

This comparison was understandable considering the similar properties of its timber to top quality English hardwoods. It is straight-grained, strong, and elastic; easy to work, and light red in colour.

In the early days of European settlement, its timber was naturally used as a ready substitute for ash and oak by old country wheelwrights and coachbuilders for coach construction, tool handles, or to make yokes and wheels for horse-drawn or bullock-drawn wagons.

In Māori Healing and Herbal, Murdoch Riley explains that Māori also held tītoki in high regard for its strong timber. The phrase “peka tītoki” was used in whakataukī (proverbs) to compare its tough wood to a rangatira, iwi or hapū who would not surrender to adversity.

Tītoki is a fine specimen tree with a central leader reaching nine to 12 metres in height, and a wide spreading habit. It grows naturally in coastal and lowland forest throughout Te Ika a Māui and as far south as Horomaka (Banks Peninsula) on the east coast of Te Waipounamu, and about halfway down Te Tai Poutini (the West Coast).

Tītoki’s glossy dark green leaves are neatly arranged in four to six pairs on alternate sides of the stem. In spring, its small purple flowers are inconspicuous. The seed, enclosed in a hairy, woody capsule, takes up to a year to mature, which is unusual in that tītoki can flower and carry last year’s seedpods at the same time.

The seed capsule splits open to reveal a bright, shiny black seed perched in a fleshy red base that looks like a ripe raspberry, and almost good enough to eat. Historical records tell us Māori children did eat this fleshy fruit, but it had a very bitter taste and its nutritional value is doubtful. As one early missionary put it: “It was more agreeable to the eye than to the taste.”

Intriguingly, it was the hard black seed of tītoki that was of more interest to Māori, who extracted its oil for use as a hair or body oil when steeped or blended with other natural perfumes.

Tītoki oil was the best quality oil available to Māori but because it was so difficult to extract, it was highly valued for its scarcity. It must have been “the good oil”, because early European watchmakers used it as a lubricant in their trade.

Ethnographer and author Elsdon Best gives a detailed step-by-step description of the hinu tītoki extraction process in his classic Forest Lore of the Māori.

First, the whole berry was collected in kete (baskets), crushed, washed, rinsed, and trampled to remove the clean seeds from the fleshy base of the fruit.

The seeds were then pounded in a solid ipu (basin) with a tuki (pestle) and then placed in a strong elongated bag plaited from green harakeke (flax) leaves. In some references, the crushed seeds were pre-heated in an umu or hot rocks were placed inside the bag to speed up the flow of oil when it was compressed.

Two men with strong cross-poles at each end of the bag then twisted it in opposite directions to express the oil into an ipu below; a similar technique to that used to extract the juice of tutu and other berries or fruit.

The resulting green oil was historically used for medicinal purposes including the treatment of sore or inflamed eyes, wounds and open sores, chapped skin and bruises, sore breasts, and rheumatic joints.
Some sources say the oil is a good skin softener, and it was also taken internally as a laxative.

The skin of a pūkeko was immersed in this scented oil, wrapped into a ball and suspended from the neck, or it could be stored in a tahā hinu (small vessel for oil) worn around the neck, to slowly waft its fragrance under the wearer’s nostrils.

The oil was mixed with kōkōwai (red ochre) to kill vermin — presumably fleas or lice infesting the body or clothing. It was very effective, according to one source.

Another source suggests bruising and boiling the leaves of tītoki and rubbing the liquid on the skin to ward off sandflies. To treat sandfly bites, bruise the leaf and use its juice to ease the pain and reduce the swelling — a handy tip if caught in the bush without insect repellent.

According to Best, the Tākitumu people once dried bodies after death by placing the corpse between two thick inner sheets of tōtara bark which had been smeared with hinu tītoki and pia tarata. When the body was dried, pia tarata was smeared over it to close the pores and prevent decay.

When Europeans arrived in Aotearoa bearing commercially produced hair oils and the technology to extract oil from whales, the tedious practice of extracting hinu tītoki from seed gradually died out.

In recent years, scientists have found that hinu tītoki contains cyanolipids . An extract from its leaves and twigs is believed to have anti-viral properties effective against the influenza A virus.

Apparently, a tītoki flavoured liqueur was developed by Department of Scientific and Industrial Research in the 1970s. It was exported to Japan, Australia, Fiji, and the United Kingdom.

For such a useful plant, it is surprising tītoki is not used more in natural skin products and medicines today. Perhaps there is an opportunity there for some resourceful entrepreneur, if they are not using it already.