The only way te reo Māori will survive is by normalising it in everyday life, says Talia Ellison.
Kaituhi Mark Revington reports. 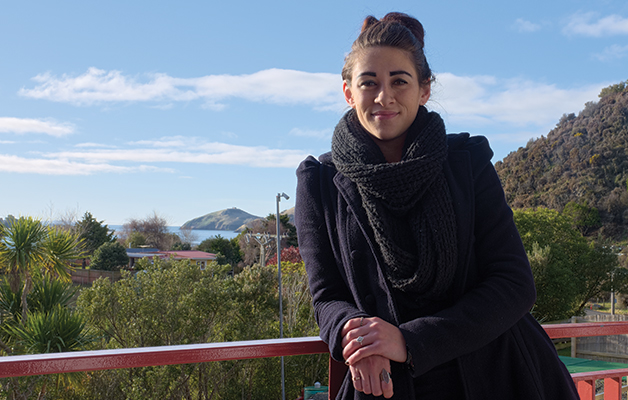 Someone who lives and breathes the philosophy is Talia Ellison. “My sister used to get embarrassed by me speaking to her in Māori in supermarkets,” she says. “In the supermarket, everyone stares at you and that’s what she doesn’t like. I told her, ‘Do you know what one of my good friends who is from Nicaragua said when she first moved to New Zealand?’ The first time she went to New World and the self-checkout machine said ‘Kia ora’ to her, she cried. That is not a reality she can ever imagine in her own country.

“The only way our language will survive is by normalising it in everyday life. If you won’t let me speak to you in Māori in the supermarket, you are never going to normalise it, and when your kids want to learn Māori, they are going to have to learn from me because you can’t and I don’t have time for that.”

Talia (Kāi te Pahi, Kāi te Ruahikihiki, Kāti Kuri – Kāi Tahu describes herself as a “through-and-through nerdy little academic.” In person, she is more like a force of nature.

She grew up on the Otago Peninsula and calls Dunedin home, “I grew up at my marae, Ōtākou. I’m a pā brat. Most of my childhood memories involve my cousins and I playing at the marae. I’ve been here ever since, apart from six weeks in Christchurch in 2012 and half a year in Hamilton in 2013.” Her time in Christchurch was spent as an intern with Te Rūnanga o Ngāi Tahu.

Talia is 22, proficient in te reo Māori (somewhat, she says), and next year aims to grow her competency in Mandarin. She is one of three Ngāi Tahu rangatahi to be awarded the Agria-Hōaka Scholarship for 2015. The others are her younger sister Ranui, and Liam Stonely.

She is a curious mix – a stroppy, proud, unmissable presence who is sometimes shy, and loves hanging out in the kitchen at Ōtākou marae.

Which Ngāi Tahu rakatahi got to haka on the Great Wall of China? That would be Talia Ellison.

Talia was in China on a summer camp run through the University of Auckland and the Confucius Institute, a not-for-profit organisation that promotes Chinese language and culture .

“Me being the little wee hearty that I am jumped up on top of one of the towers of the Great Wall and did a ‘Tēnei te Ruru/ Tahu Pōtiki’ represent. I was like, ‘This is for you, my queenies,’ and everyone was like, ‘What?’ Come on, how many people have done a haka on the Great Wall of China?”

Not many, if any, would be my guess. Never heard of her? Chances are you will soon. If ever the label “one to watch” made sense, it wraps snugly around this rangatahi.

She finished a Bachelor of Arts in Māori and Indigenous Development at the University of Otago in 2014, and is currently working towards a Master’s Degree in Peace and Conflict Studies. 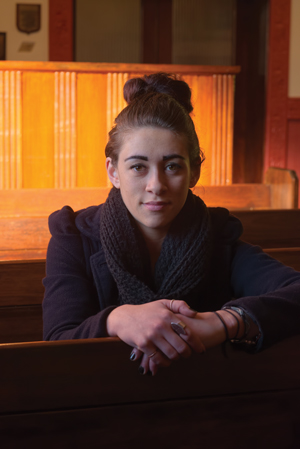 Along the way she was a youth representative for Dunedin South MP Clare Curran at the Youth Parliament in 2010.

“I won the speech competition that she held at King’s and Queen’s high schools when I was in Year 13. Because my dad had worked in prisons, I had strong views on justice and I decided my select committee would be on social development. I didn’t go to the Māori select committee. I decided it was going to be a waste of time sitting with a whole lot of Māori who probably share similar views and my time would be better spent on arguing why not to raise the drinking age.”

She is a skilled public speaker, sometimes outspoken on youth affairs, and was selected for a cadetship within the in-house legal team at Te Rūnanga ō Ngāi Tahu.

She taught Māori at Queen’s High School, was a kaiāwhina for Kotahi Mano Kāika, the Ngāi Tahu language revitalisation unit, and is now tutoring te reo Māori at the University of Otago.

It is a metaphorical, poetic, beautiful language, she says. Some people may accuse her of being a language snob, but she thinks it is important to kōrero Māori properly.

“There is a point where it goes beyond just grammar mishaps. Some people need to be the taniwha of te reo and say that it has to be correct and it has to flow and it has to be Māori, because otherwise it’s not a language anymore.

“I’m certainly not perfect. I make mistakes all the time and some days I feel like I can’t speak English or Māori. It’s hard but the only way to get better is to keep trying, keep making mistakes and actually learn from them. It’s not always about being the best, sometimes it’s just about being better today than yesterday.”

It is Kotahi Mano Kāika programme leader Paulette Tamati-Elliffe whose knowledge inspired her the most.

“Aunty Paulette is the reason I wanted to be better. We grew up around Kotahi Mano Kāika, not in it 100 per cent to the same extent that her boys were, but she and Uncle Komene did their best to involve us and take us to the whānau reo dinners and all of that stuff. They used to come and pick us up and take us out to the marae for wānaka. And of course they were my high school kapa haka tutors alongside Whaea Cherie, Whaea Ange, Matua Tane and Whaea Marcie.

“I always remember her telling me to learn te reo Māori before I have children, because more time and fewer responsibilities and your brain works better when you’re younger. I always wanted to make sure I learnt Māori before I had kids, because I wanted my children to be raised in te reo and I didn’t want to start learning when I got pregnant, because that would be a nightmare.

“Paulette and Komene always reminded us that they were once beginners and now they’re, like, the people who run kōrero. They’re just like legends. They are the people there alongside others revitalising our language. I love that Aunty Paulette’s entire life is learning and working to revitalise te reo Māori. I can’t think of a better way to leave my mark on the world.”

The Agria-Hōaka scholarship is a joint partnership and relationship between Te Rūnanga o Ngāi Tahu and Agria Corporation Limited (New Zealand), and is based on a common commitment to intergenerational excellence.

Agria Corporation Limited is a China-based agriculture company with operations in China and internationally. Ngāi Tahu and Agria are both shareholders in PGG Wrightson.

As of next year, the Agria-Hōaka Scholarship will be offered to three Ngāi Tahu members who are looking to grow and strengthen their cultural and professional development. To ensure successful candidates are committed to the scholarship, they will need to study and pass Level 2 Chinese Language through the Auckland Confucius Institute during 2015. This course is to be studied on a part-time basis.