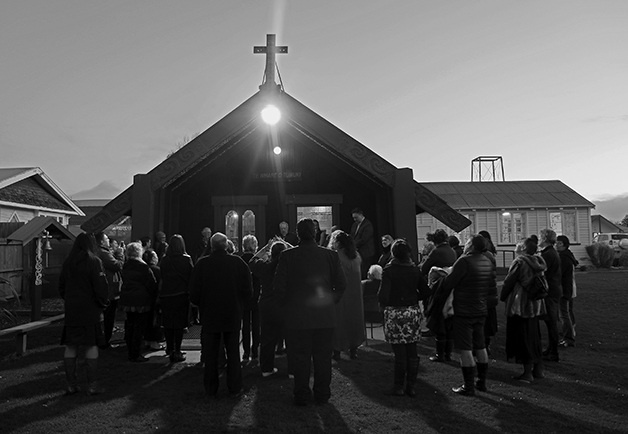 The college was the only boarding school for girls in Te Waipounamu so for hundreds of Ngāi Tahu families, and many others from the north and further afield, their daughters were sent there to be educated.

Recently a small group of former Te Wai girls came together at the old Ferry Road school site in Christchurch to reminisce and help celebrate a significant birthday for former college Matron Reihana Parata; aka Aunty Doe or just “Mum” for the old girls of Te Wai!

Opened in 1909 by the Anglican Māori Diocese in Ōhoka under the guidance of Rev Charles Fraer, the college never deviated from its focus of providing an education for Māori girls. In 1921 it moved from its rural roots to its Ferry Road site and in 1965 the on-site school was closed and the girls started attending nearby Avonside Girls’ High School for their formal education.

“We might have gone to Avonside to learn our writing and arithmetic, but at the college we learnt how to look after ourselves and each other, about our culture and language, how to be resourceful and creative, cook and clean, grow food,” says Leisa Aumua, who helped organise the reunion.

“It was real marae styles and ‘Mum’ was a huge part of that. She looked after us all, she was very much our Mum and we were a sisterhood – we still are today.”

Aunty Doe says she just wanted to help when she took on the job of Matron in 1978. She was living in Rotorua with husband Pura and her two eldest daughters, Ripeka and Rangimarie, were boarding at the college.

“I used to go down to college and sort out my children,” she says smiling. “I could see the school was having a few problems and I just wanted to help.”

The whole family relocated to Christchurch and lived at the college for the next 11 years. Their youngest girl, Puamiria, also attended the college and the boys Taiawhio and Manawanui attended boarding school in the north.

“It was our home. Pura, or ‘Dad’ as they called him, was also very involved in the school. He was the good cop and I was the bad cop,” says Aunty Doe laughing, having just recounted stories of her doing the night patrol carrying a hockey stick to deal with the hostel boys that were frequent uninvited visitors.

“Families would send me a young girl and they got back a young lady.”

More than 150 whānau, friends and 35 Te Wai girls gathered at Te Pā o Rākihautū to honour and celebrate 80 years of life, love and service to whānau and community.

“When the girls started to sing those memories just all came back,” sighs Aunty Doe. “I love their singing.”