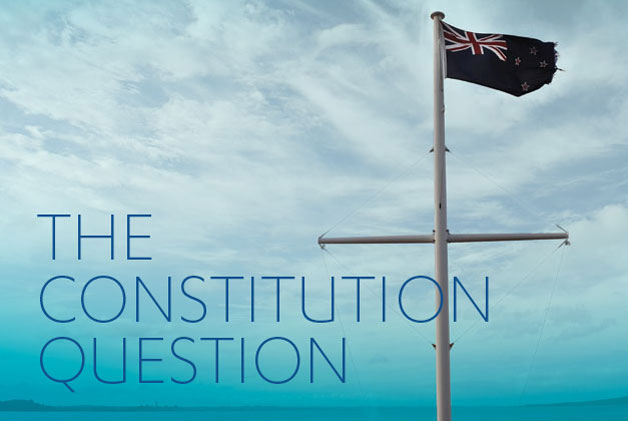 What kind of future do you want for your moko? Will the government take any notice? Kaituhituhi Kim Triegaardt reports.

How do you want the future to look for your grand-children? That is at the heart of conversations taking place all over the country about New Zealand’s constitutional arrangements, says Tā Tipene O’Regan, co-chair of a 12-strong panel of academics, law professors, local government officials, media specialists and Māori community representatives charged with driving the conversation.

“In many countries this conversation takes place in the context of blood and death. People die over these questions. While it’s a challenging topic in peace time you still need to be aware of your rights and what protects you, if, for example, you are being illegally spied on or, as was the case with the Foreshore and Seabed Act, being denied access to the courts.”

New Zealand is one of only three countries in the world without a written constitution; the others are Israel and Britain.

Currently New Zealand is a democratic, constitutional monarchy. The Queen is effectively head of state through her representative the Governor-General. She acts on the advice from the government of the day, which the public elects.

There is a raft of legislation including among others the New Zealand Bill of Rights (1990), the Human Rights Act (1993), the Treaty of Waitangi Act (1975) and the Constitution Act (1986) that work together to form the basis of our constitutional arrangements. However, there is no Upper House or Supreme Bill of Rights that balances out majority decision-making.

When National came to power after the 2008 election, it did so with the help of the Māori Party, which, among other conditions, asked for a review of New Zealand’s constitutional arrangements.

The panel was given two years to collect “a range of views on New Zealand’s constitution and identify any broad areas of agreement,” says Burrows. “Our job was to get the message out to as many people living in New Zealand as possible and encourage them to make submissions. We then have to report back on any areas where further work could be done.”

Burrows says it took several months initially to take what was being asked in the terms of reference and reframe it into something accessible to the general public. “We tend to use big words when we’re talking about complex law issues, which turns people off, so we had to break everything down into simple concepts that would draw people in. By asking a series of questions you can engage people in a conversation,” he says.

The panel members have travelled extensively talking at workshops and trade union meetings; they’ve debated at student forums and discussed the issues on marae around the country.

Public submissions are due to close at the end of July and so far more than 1,000 have been made. Former journalist and panel member Deborah Coddington says they are expecting “a flood of them” just before the deadline. “You can see when there’s been some publicity,” she says. “The views to our Facebook page spike.”

That’s good news for the panel because it means what they are doing is working and people are talking about New Zealand’s constitution, or lack of it. But it’s a conversation that highlights just how little we know about the subject, says former New Zealand Prime Minister Sir Geoffrey Palmer, the man responsible for many of the reforms of the country’s legal and constitutional framework, such as the Constitution Act 1986 and New Zealand Bill of Rights. “We are talking about power,” he says. “But people don’t think about how we are governed, who has public power and who can exercise power.”

As it stands now, any aspect of any law, including those considered our constitution, can be changed through amendments. Parliament is the final lawmaker.

“We have such an evolving constitution,” says Sir Geoffrey. “It has no moorings and evolves with political development so anything goes. That puts us at risk and makes us vulnerable.”

Tā Tipene believes this is the perfect time to be having this conversation.

Sir Geoffrey agrees. “Most constitutions come from some cataclysmic event but we haven’t had that constitutional moment”, which he adds is probably much of the reason there is such a lack of public engagement. “You can’t really say that New Zealand is badly governed, so why change it. The burden of proof is going to be on the advocates of change and that burden will be difficult to prove and difficult to win.”

The panel’s terms of reference include gathering opinions on the size of Parliament, the length of terms of Parliament and Māori seats in Parliament and local government. The panel was also asked to consider the role of the Treaty of Waitangi within New Zealand’s constitutional arrangements. It is not the first time the question has been asked.

Sir Geoffrey says that when the Bill of Rights was initially drafted in 1986 it included the Treaty of Waitangi. “After a great deal of debate, reference to the Treaty was taken out by the Select Committee and the Bill was eventually passed as a statute and not a constitution.”

It’s also the question that most reflects the discordant face of New Zealand, says Treaty of Waitangi educator Robert Consedine.

“At one end of the spectrum, people talk about the illegality of Parliament based on the fact Captain William Hobson claimed sovereignty over New Zealand in November 1840 in complete disregard of both the Declaration of Independence (1935) and the Treaty of Waitangi (February 1840), which both recognised Māori tino rangitiratanga or sovereignty over New Zealand. Then on the opposite extreme, there are groups stridently objecting that entrenching Māori rights means making second class citizens of non-Māori New Zealanders.”

At the moment the Treaty of Waitangi lies half-in and half-out of the constitution and there is no expression of tino rangitiratanga in any current legislation.

There are strong arguments that Māori should be recognised as a full partner in a political system that reflects tikanga Māori, says Consedine who believes the original spirit of the Treaty was that hapū would co-exist alongside Crown sovereignty. He hopes the constitutional review will lead to strong functional Treaty relationships. With no entrenched constitution, he fears New Zealand will continue down what he says is a slippery slide into the decline of democracy.

“A constitution would entrench things that Parliament couldn’t change. Something we need because at the moment we’re heading towards a police state with the amount of control, the number of laws and the increasing inequality in New Zealand. A constitution really needs to start with a conversation about the values we want live by and then build a structure around that.”

Burrows says the panel’s job is simply to listen to all these opinions and not to make judgements. ‘We are there to discover the public mood, and to find whether there are areas of broad consensus.”

Tā Tipene hopes that consensus lies in a more sentient and thoughtful approach to the electoral process. “It’s about how we relate to everyone so we improve the quality of our relationships,” he says.

In December, the government will release a report based on the panel’s findings that will probably gather dust in a drawer, says Sir Geoffrey. “That’s the fate of most reviews conducted by the government all the time. Most don’t get anywhere.”

But it’s all about being patient he says. It could take 20, 30 or 50 years but now the conversation has begun, just like pushing a rock down a hill, “it will start to take on a life of its own. The constitution has to live in the hearts and minds of people – it has to be a living thing and now people are starting to understand that and talk about it.”

Tā Tipene believes now that the ball is rolling, it’s even more vital that Māori engage with the conversation and make submissions. He says it will give Māori the opportunity to move away from their role as Treaty victims.

“We’ve been in resentment mode for so long and now we can make decisions about ourselves and how we want our relationships to be shaped. It’s about how we want the world to be and recognising that we are part of a wider community, nationally and globally.”

The Constitutional Advisory Panel has decided to extend the deadline for submissions until July 31. You can find out more by going online to www.ourconstitution.org.nz or calling the free phone number 0508-411-411. You can also join the Conversation on Facebook at www.facebook.com/TheConstitutionConversation.